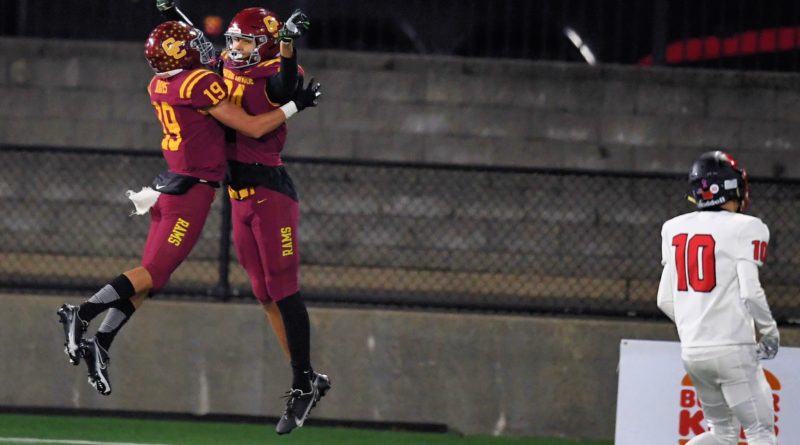 Junior Riley Williams’ touchdown catch on a jump-ball pass on the final play of the first half was the springboard for the Rams, who pulled away from a 7-7 score to defeat the Cavaliers at Hillsboro Stadium and win the Mt. Hood Conference championship.

The 6-foot-7 Williams leapt and caught Cru Newman’s pass at about the Clackamas 4-yard line and flowed into the end zone for a 38-yard completion and the go-ahead touchdown.

Williams also used his height to his advantage on the Rams’ first touchdown. On the first snap after a Cavaliers drive ended on downs, Newman lofted the ball down the right sideline on first down from the 25. Williams leapt over a defender, caught the ball at the Rams’ 47 and pulled away from pursuers for a 75-yard touchdown and a 7-0 Rams lead two minutes into the second quarter.

The Cavaliers (9-1, 7-1 Mt. Hood Conference) evened the score with 3:28 before halftime on a four-yard run by Brody Crowley.

Ellis Bynum added to the host Rams’ lead, scoring midway through the third quarter and early in the fourth.

Bynum took a handoff and tested the middle of the line before bouncing to the left and racing down the sideline for a 35-yard score with 5:13 left in the third. Two minutes into the fourth, he and Newman combined for a 25-yard touchdown that made it a three-score game. Newman ducked under what looked as if it was going to be a sack and tossed the ball to Bynum in the right flat. From there, Bynum set up his blocks and darted down the sideline for the touchdown that led to a 28-7 lead.

The Cavaliers got a touchdown from Blake Baker to KJ Johnson-Gibson on a pass play of about 50 yards with 2:29 left to make it 38-14, and those two connected on another score on a long pass with one second left for the final points.