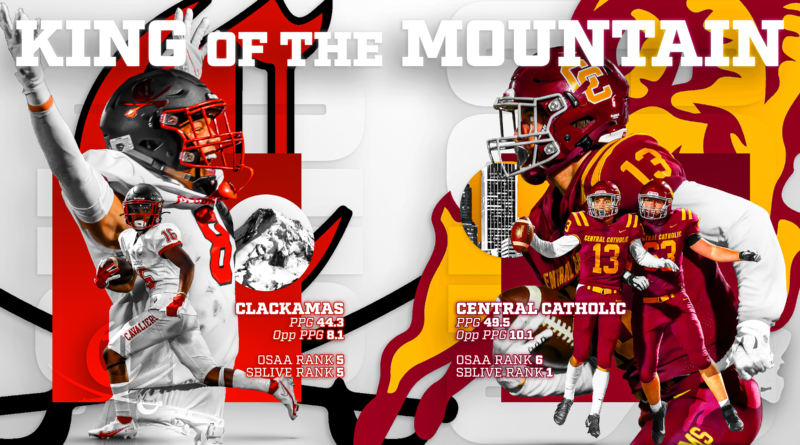 No. 5 Clackamas and No. 1 Central Catholic meet in a conference game Friday, but this one is going to be in a whole different league.

Each team has steamrollered its way through its schedule — winning every game, by an average margin of more than 35 points — on the way to Friday’s regular-season finale at Hillsboro Stadium. Neither team is used to having an outcome in question in the fourth quarter, and that drastic ramp-up in competitiveness creates an intriguing angle to a game that will decide the Mt. Hood Conference championship.

“This will be the best team we’ve faced since at least Tumwater, if not before that,” Central Catholic coach Steve Pyne said, referring to a game arranged on short notice in Week 3 after the Rams’ scheduled opponent forfeited. Since then, the Rams’ closest game was decided by 28 points.

“What’s a 48-minute game look like?” Pyne said. “What’s going to happen in crunch time? Are you going to buckle under the pressure, or are you going to rise above it and relax and play?”

Clackamas coach James Holan’s team also hasn’t had a game in doubt for weeks. He is confident in his team’s ability to measure up, citing the progressive improvement he has seen this season.

“We’re about to play the best team we’ve played all year,” he said, “so we’re about to find out if we’re ready.”

When looking forward to Friday’s game at Hillsboro Stadium (streaming on the ESPN App and broadcast on ESPNU), it’s natural to look back to the teams’ meeting in the spring season. The Rams emerged with a 14-7 win — getting the go-ahead score with 2:10 left — in a game that could have gone the Cavaliers’ way.

There seems to be no doubt that both teams well remember the spring game, but neither is dwelling on it, either.

“We think about it, but right now we’re trying to focus on the Clackamas team they have right now,” said Rams senior Zachery Grisham, a starting wide receiver and safety. “It’s going to be awesome to get to play a great team again.”

“Last year, we came up short against them, and I know everyone is hungry to get after Central,” Cavaliers senior outside linebacker Kaden Ludwick said, adding that practice early this week has had a different feel. “I can tell people want it, and they want it bad.”

As might be expected in a game between teams with 9-0 records (each 7-0 in the Mt. Hood Conference), neither team seems to have a detectable — or at least exploitable — weakness.

Pyne paid respect to the Cavaliers’ front lines and defensive box and noted Clackamas’ talented and experienced secondary. The Cavaliers have intercepted 14 passes in their seven on-field games, Sullivan McDaniel leading the team with three and Miles Williams, Keontae Johnson-Gibson and Joey Giancola having two each.

Holan cited defensive linemen Logan Chastain and Noah Preuitt as under-recognized linchpins to the Cavaliers’ defense. Holan said Chastain — who on offense moved from guard to center after an injury at that position — has taken a noticeable step up on defense and is playing at “an extremely high level.”

Preuitt leads the team in tackles and sacks.

The Rams, who have scored a Class 6A-best 396 points, have benefited on defense from a front seven that Pyne said has become a team strength. In the Rams’ past five games (since playing Tumwater and its wing-T), they have allowed 32 rushing yards per game.

Rams sophomore quarterback Cru Newman, in his first season as a full-time starter, was throwing touchdowns on 27.5 percent of his passes through Week 7 — more than 50 percent more often than any other Class 6A passer. Newman averaged 14.5 yards per attempt through Week 7; he hadn’t thrown enough passes to qualify for the Class 6A lead, but after being docked with an incompletion for every attempt he was short of the qualification threshold, he still led the state.

Ellis Bynum, who was out with an injury the first two weeks of the season, leads the Rams’ share-the-wealth rushing game with more than 400 yards and eight touchdowns.

“They are who they are,” Holan said. “They run their stuff. They run it to perfection.”

The Rams of Southeast Portland allow 10.1 points per game, second to the Cavaliers’ 8.1 among Class 6A schools. Clackamas has three shutouts in seven games; Central Catholic has three shutouts and was a safety away from a fourth.

The Cavaliers’ Blake Baker is second to Newman among Class 6A passers in touchdown percentage, at 17.2 percent, and has an 18-2 touchdown-to-interception ratio. Running back Luke Ash has destroyed defenses from the third game of his sophomore season to now, gaining 1,433 yards and 24 touchdowns in his past 11 games with an average of 7.9 yards per carry.

As Class 6A’s only two undefeated teams, the Cavaliers and Rams are on anyone’s shortlist of championship contenders. But — cue the cliché warning here — the teams are trying to maintain a one-week-at-a-time mindset.

“If we want to get to where we ultimately want to be,” Grisham said about the Rams’ overarching approach, “we have to handle business this week. And so we‘re just focusing on being 1-0 each week and not thinking too far into the future.”

“We know it’s a big game, but we also see it as no bigger than any of the other games we’ve played,” Ludwick said. “The ultimate goal is we want to win it all — we want to win state — but we need to take it week by week.”

Both teams have guaranteed reservations in the Class 6A playoff field, where they will try to string together the five wins needed to become state champion. That means that, for all of the stakes tied to this game — the Mt. Hood Conference championship, seeding for the playoffs, bragging rights in one of Oregon’s most compelling football rivalries — its significance might in fact be relatively minor.

As much as each team wants to reach the Mt. Hood summit, the sights of both teams are actually trained on heights beyond.

As Pyne said, “I’m more concerned about, are we good enough to make a five-game run?”