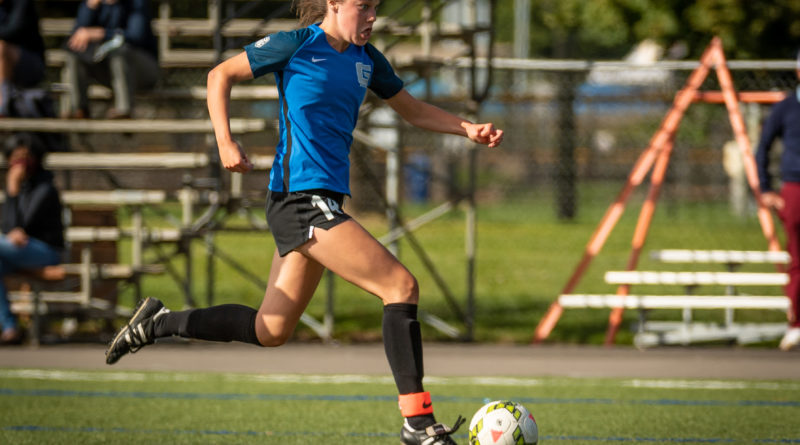 This week, we’re taking a position-by-position look at some of the top players in Oregon high school girls soccer. Our third list focuses on the forwards. (Goalkeepers | Defenders)

There are hundreds of standout soccer players in Oregon and these lists are not intended to be comprehensive! Let us know about any other forwards you think should be added.

Frazier kicked off her senior season with a hat trick against Oregon Episcopal and has kept right on going. The Portland State commit has two five-goal games this season (against Sunset and McDaniel) and sat at 19 goals and five assists through the Generals’ 9-1 start.

Minga, as she’s known on the soccer pitch, was a first-team all-Tri-Valley and second-team Class 4A all-state selection in the spring, when she scored eight goals and led the Huskies to a 9-1-2 record and the 4A Elite 8 championship. She also stars for the Albion SC club team and plays varsity basketball. “Mina possesses the speed, soccer intelligence and determination to take on defenders and make the players around her better,” North Marion coach Ben Bonser said.

Wormdahl is the daughter of Highlanders coach Brandy Wormdahl and younger sister of Jordan, a senior on the Oregon women’s team who has eight goals in 58 career games. Avery led North Eugene in scoring as a sophomore and kicked off her senior season with two goals and two assists through five games. She aspires to compete in acrobatics and tumbling at Oregon, and Coach Wormdahl said “she definitely brings an element of those skills to her play. She is feisty and rivals (Lauren) Becraft for competitiveness.”

Smith stepped into a bigger role during the spring season for the Raiders after making the varsity as a freshman on the 2019 Class 5A state championship team. She scored eight goals during the spring. “Abby is the joyful spark plug of the team,” Crescent Valley coach Chris Paradis said. “She is the hardest worker I have ever seen in our program, putting in work before and after training, but she still brings a playful, silly attitude that keeps our training fun.”

Poole teams with 10-goal scorer Alana Harry up top to give the Cardinals a potent 1-2 scoring punch. “Aimee is a clinical striker and has the speed on the outside that tests anyone she goes against,” Lincoln coach Lainey Hulsizer said.

Harry has become the primary scoring threat for the Cardinals this fall. She had a hat trick against Roosevelt on Oct. 4 that gave her 10 goals for the season. “Alana is really beginning to hit her stride as the center forward,” Lincoln coach Lainey Hulsizer said. “She has the striker mindset and skills needed to be a threat to any defense.”

Hart kicked off her career by making the all-Midwestern second team as a freshman. She followed by making the honorable mention list after getting injured midway through her sophomore season. Through the Highlanders’ first five games this season, the Oregon Tech commit had four goals and three assists. “A fast, dynamic forward who leads our attack, Ashley draws a lot of attention from other teams because of her ability to get to the ball quickly and create chances up front,” North Eugene coach Brandy Wormdahl said.

Alderman broke through during the spring season for the Tigers, receiving first-team all-Three Rivers recognition.

Brown was one of the Warriors’ top attacking threats as a sophomore, when she had two goals and four assists during the spring season. She has kept it up during the fall. “Charlotte has been a huge help to the team,” Aloha coach Joel Rojas said.

Bradley was an all-PIL honorable mention pick as a freshman in 2019, when the program won its first league title in six seasons. Guardians coach Josh Edwards said that while Bradley created chances for all-PIL teammates such as Mackenna Antonini and Lucy Quinn in the past, “this season, she has started to look to create for herself more and has developed into a fantastic all-around forward. She is always a threat to score and does a lot of the thankless work as the first line in our defense.”

James made the all-league team after her sophomore and junior seasons and helps pace an attack that scored 30 goals during a 7-1 start to the fall campaign. “Hannah has to work hard between the opposing center backs,” Bruins coach Brian Carlson said. “She creates many scoring opportunities with her drive and determination. Hannah also has a knack for being on the scoring end of corner kicks.”

Johnson is an accomplished pianist who has played since she was 5 and has written a few pieces. She also is a prodigy on the soccer pitch whom Cougars coach Roberto Maestretti hopes to build around. Her club coach, Sarah Panza of Soccer Chance Academy, called her “a quick and dynamic player who has the ability to shake opponents with changes in direction and explosive speed. Her growth over the last year has been nothing short of incredible. She is definitely a player to keep an eye on in the coming years.”

Whittaker meshed seamlessly with Oregon State commit Lindsey Antonson in the Wildcats attack during the spring season, finishing second to Antonson in scoring with 10 goals in 11 games. She is an avid juggler with both her hands and her feet, showing off the nimble footwork that allows her to succeed on the pitch despite her diminutive size. “Kenley is able to swiftly dribble through and around players with ease, not to mention she is one of our best attackers in the air,” Wilsonville coach Dallas Malone said. “Kenley has the ability to take a play with little to work with — and turn it into a goal scoring opportunity. We look forward to seeing her career grow.”

Fagan was an honorable mention all-Northwest Oregon selection as a sophomore. She has the ability to use both feet to deliver corner kicks or rocket shots on goal.

Antonson joined a prolific list of strikers in a 5-0 victory over Liberty on Sept. 27, recording her 100th career goal to become the 13th girl in state history to reach that milestone. The two-time Class 5A all-state first-team pick and 2019 player of the year led the Wildcats to their first 5A final appearance in eight seasons that year, and she hopes to bring home the school’s first girls soccer state title this fall before heading to Corvallis to join the Oregon State program. “Lindsey is a player that has the ability to find the back of the net, regardless of where she is on the field or how many players are in front of her,” Wildcats coach Dallas Malone said. “Her passion for the game is evident, and she is well-respected throughout the state, league, and within our program.”

Rojas had two goals and five assists playing against mostly 5A teams during the spring season, earning all-league honorable mention. Bulldogs coach Andrea Whiteman praised Rojas’ improvement seemingly every game this season. “She is continually impressing our team by showing what she is made of as an offensive threat,” Whiteman said. “She is an extremely technical player with an elite ability to finish and set others up to score.”

Fuller has started for the Spartans the past three seasons, scoring six goals with eight assists as a sophomore and five goals with five assists in 12 games in the spring, when she received Class 4A all-state honorable mention. “Madison is a no-nonsense and relentless athlete who has pace and stamina all day long,” Marist Catholic coach Stefan Schroffner said. “She has that dogged, competitive nature to stretch and wear down a backline and also the technical ability to assist and score in critical moments.”

Alston, an honorable mention all-league wing as a freshman, is a jolt of pure caffeine at 6 a.m. practices, serving to awaken her still-sleepy teammates. “Maya is a nonstop player,” Celtics coach Lauren Brouse said. “She will work hard from the first minute to the last. If Maya is off her game, the rest of them are off because she is such a leader in her work ethic.”

Merten was a key contributor when the Raiders won the second of their back-to-back Class 5A state titles in 2019, notching five goals and two assists. She also contributes off the pitch, hand-drawing the designs used for the team sweatshirts this fall.

Alvarez kicked off her career with a bang, scoring 13 goals as a freshman to help the Crusaders win the second of their three consecutive Class 6A state titles. Injuries derailed each of her past two seasons, but finally 100 percent healthy, she got off to a strong start with four goals and eight assists through seven games this season.

Rhode took over at striker in the spring for two-time Class 6A all-state selection Nedya Sawan, the 2018 state player of the year who’s now at the University of Portland. Rhode had six goals and five assists and made the all-Metro first team. She recently returned to the team this season after missing two games with an injury.

O’Dell improved from making the all-district honorable mention list as a sophomore to becoming a first-team selection during the spring season. She recorded two hat tricks in the opening weeks of the fall season. One of her hat tricks displayed her prowess getting on the end of set pieces — she headed in a corner kick and volleyed two others from the air with instep shots.

In Crawford’s first six games this season, she’d already exceeded her entire production from the spring, when she had two goals and two assists in limited action in 12 games playing behind a veteran front line. “She is poised to have a breakout season for us,” Spartans coach Stefan Schroffner said last month of Crawford, who had three goals and two assists during Marist Catholic’s 4-1-1 start. “She is very physical with good technical skill and can shoot well with both feet.”

Alfano was a second-team all-league selection during the spring season. Celtics coach Lauren Brouse called her “a quiet leader (who) is very coachable and able to execute anything that we ask of her. She is extremely dangerous up top and can shoot from anywhere.”

The Lancers canceled their girls program this season, so Maddux joined several of her teammates on the boys team, scoring a goal against Pacific in their second match of the season. Maddux also takes part in FFA, for which she is the chapter treasurer. “Josie is a natural leader on the team,” South Umpqua coach August Harrison said.