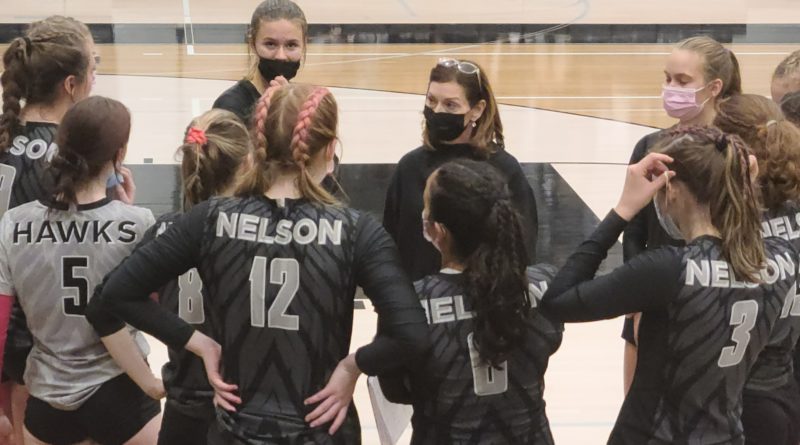 Lisa Flaherty-McBee didn’t know what to expect when the first day of volleyball practice arrived in August.

Flaherty-McBee had moved over from Clackamas, where she’d coached for three seasons, to Adrienne C. Nelson, which opened this year down the road in Happy Valley.

“We had no idea who was going to be in the gym,” she said. “We didn’t know what the program was going to look like.”

She was quite pleased, though, to see senior setter Ellie Wallace walk through the door. Wallace had the option to stay at Clackamas for her senior season, but she knew that several of her club teammates would be making the 4-mile move, and she wanted to keep playing alongside them.

“We work really well together,” said Wallace, one of three seniors on the roster. “So, I thought that would hopefully transfer over to our high school season, which it did.”

Indeed, the Hawks finished tied for second in the Mt. Hood Conference standings with Clackamas and earned the No. 13 seed in the Class 6A state playoffs in their inaugural season. They opened their first postseason Wednesday night with a three-set sweep of Roseburg, defeating the Southwest Conference co-runner-up 25-17, 25-13, 25-20.

“I’m absolutely shocked, but I’m also super happy that we were able to do this,” said Wallace, who had 37 assists and seven aces. “We’ve been working really well together, and we all connect super well on and off the court.”

Flaherty-McBee added, “They took to heart the whole thought of how tradition starts here. They had a whole list of goals as a team, and we have incredible leaders with an amazing chemistry together. It’s been exciting to watch them reach every single one, and that’s due to the hard work and the commitment that showed since when we started with tryouts.”

Junior Kalisa Lukovich had a match-high 17 kills, and senior Ava Sciulli added 10 for the Hawks (17-7), who will face MHC champion Central Catholic in Saturday’s second round.

The Rams swept the season series from Nelson, but the Hawks did take the second set in their second meeting — one of only two sets Central Catholic dropped in running the table for its 17th consecutive conference title.

“We didn’t come out with the W the last time we played them, but we were doing some really good things,” Flaherty-McBee said. “We serve really tough, and we can really bring the hitting when we need to. The big thing for us is just going to be playing with determination and commitment to every point and really sticking to our mission.”

Abby Francis led a balanced attack with eight kills and a block, and Chloe LeLuge and Jillian Stein had seven kills apiece to lead No. 2 Bend (21-2) to a 25-13, 25-12, 25-14 home victory. Stein also had eight digs, and LeLuge had two blocks for the Lava Bears, who play host to Mountainside on Saturday.

Emma Pruitt had a 14-point service run that blew open the third set as No. 7 Oregon City (19-7) closed out a three-set sweep of visiting Lincoln, 25-18, 25-18, 25-7. All six hitters had kills for the Pioneers, led by Paige Theis with 12 (hitting .423). Pruitt added 10 kills and Olivia Adamo had eight kills, and coach Erica Frafjord praised the work of libero Samantha Keightley and defensive specialist Dimitra Protopapas on both serve receive and defense.

Junior Alize Bakker led Westview with 12 kills and 10 digs, and setters Taylor Guerra and Natalie Perez Parra each had 13 assists to lead the No. 10 Wildcats (22-5) to their first playoff win in the past nine years, sweeping Century 25-8, 25-10, 25-10 at home. Halle Garrity had a solid all-around match with seven kills, four blocks and five aces, while libero Kennedy Cheung had 10 digs. “We jumped to a big lead early in each set and played a very solid match as a team,” Westview coach Janelle Brandt said.

Kayleigh Carpenter had 13 kills and 10 digs, and Brooksie Isham added nine kills and three blocks as the No. 5 Saxons (18-6) won at home, 25-18, 25-18, 25-21, for their first playoff win since 2017. Mackenzie Scott had 13 digs and Leila Leaks had 38 assists for South Salem, which finished second in the Mountain Valley Conference. “Not our best match of the season, but the girls did what they needed to do down the stretch of each set,” Saxons coach Matt Leichty said.

The top-seeded Lions (24-2) got 12 kills from junior Amyah Semau and seven kills and two blocks from senior Ella Nordquist in a 25-12, 25-12, 25-20 home win over the Scots. Senior Rayna Reynolds added 10 kills and a block, and libero Audrey Shih had a team-high nine digs. “Audrey also passed a 2.5 to get the offense going, and Amyah played so smart and really worked in some great shots,” West Linn coach Emilie Wilmes said.

The No. 6 Bowmen (18-3) got strong play from sophomore Emily Fulton (12 kills) and junior Caitlin Kirkpatrick (seven blocks) to follow their first league title in the past nine seasons with a 20-25, 25-11, 25-20, 25-21 home win. “Our senior setter, Alyssa Kapuniai-Ryan, kept calm and delivered on the serving line (three aces) as well as with her assists,” Sherwood coach Jenette Brotnov said. “Both our middles, Caitlin and Emma (Wagner, who had four aces), were big on their blocks.”

The No. 21 Celtics (16-11) traveled up I-5 and knocked off the PIL co-champion Generals, 19-25, 25-20, 25-17, 25-21, for their first playoff win in the past six years. Emily Blagg led McNary with 16 kills, and Bella Rodriguez had 22 digs. “Last night was a rush,” Celtics coach Crystal DeMello said Thursday afternoon. “The girls worked and earned every point. Our serve receive passed a 2.1, which enabled us to run our offense, and our setter, Maddie Corpe, did an excellent job distributing the ball to our hitters and finding who was putting the ball away.”