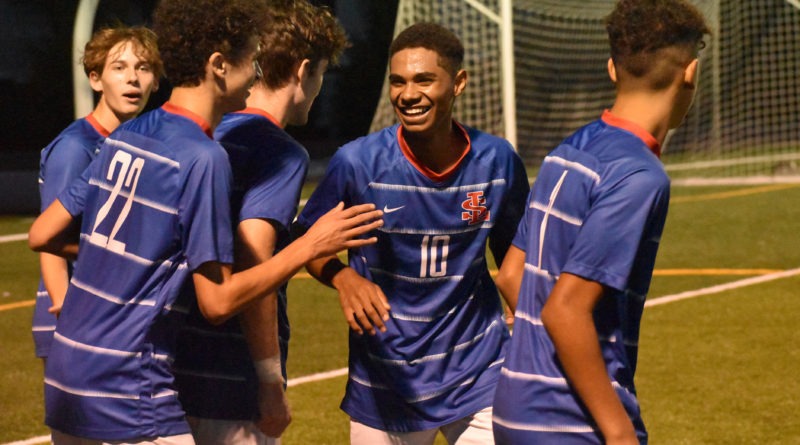 This week, we’re taking a position-by-position look at some of the top players in Oregon high school boys soccer. Our third list focuses on the forwards. (Goalkeepers | Defenders)

There are hundreds of standout soccer players in Oregon and these lists are not intended to be comprehensive! Let us know about any other forwards you think should be added.

Housley transferred from Columbia Christian, where he was a first-team all-league selection as a freshman, when his father and coach, Jason, took over as Westside Christian’s first Admissions and Strategic Outreach Director. Brady can play anywhere from center back to striker, but he’s used as an attacker for the Eagles. “Brady is a reliable player who elevates the level of team play,” Coach Housley said. “He has a high-level IQ for this game and knows how to find the back of the net.”

Wildcats co-coach Ian Reschke calls Keswick “a front-runner and, man, he’s a freight train once he gets going.” Keswick is among the team’s top scoring threats with a deft finishing touch, but he can also dish the ball off if needed. “He’s not selfish. He just wants to help the team,” Reschke said.

Rueda Duran left his mark with the Eagles program as a sophomore, when he had 32 goals and 13 assists and was the state final MVP as Catlin Gabel won a second consecutive Class 3A/2A/1A title. He played three games during an injury-plagued spring season, scoring five goals, and in the Eagles’ first five games this season, he had 13 goals. “The most spectacular, creative goal scorer I’ve coached in a 13-year career,” Catlin Gabel coach Peter Shulman said of Rueda Duran, who has committed to Bowdoin College, a Division III school in Brunswick, Maine.

Vera, a second-team all-Three Rivers selection during the spring season, sees the game with a coach’s eye after helping his father coach his younger brother’s youth team. Now a third-year starter for the Cougars, he’s developed into one of the leaders in Canby’s attack. He had assists in each of his first two games this season. “He’s poised to have a breakout year,” Cougars coach Ryan McCormack said last month.

Widdows played behind Class 3A/2A/1A player of the year Spud Ward and all-state midfielder Evan Karp his first two seasons but broke through during the spring season, when he had nine goals and eight assists in nine games and finished runner-up in player of the year voting for Special District 1. Widdows, who plays outside back for his State Cup champion club team, has committed to play for Division III Colby College in Waterville, Maine, with plans to become an orthopedic surgeon. “He’s a fast, powerful athlete who anchored Catlin’s attack in the spring,” Eagles coach Peter Shulman said. “A fiercely competitive player who ups his game as the stakes rise.”

Martinez has had a storied career with the Eagles, making the all-Mt. Hood first team as a sophomore and tallying 19 goals with four assists as a junior. He was named to the All-American Showcase watch list in the preseason and next month will participate at the National Team Pool Tryouts for his age group. “One of the hardest-working young men I know,” Centennial coach Todd Saks said. “He gets up early in the summer and preps the foundations for concrete, then comes back for training.”

Crossen is one of the main scoring threats up top when he isn’t stirring things up with his constant talking, especially at practice, said Banks coach Jimmy Bogroff. “Cole has tremendous athleticism, and he’s done a great job of creating scoring opportunities with his verticality,” Bogroff said. “He’s a clever player and has improved his confidence on the ball. He can put the ball in the back of the net from deep and get his head on the ball at any time.”

Graham is the lone returner among three seniors (M Pedro Guimaraes and D Lucas Poareo Davidson are the others) who made the all-league teams each of the past two seasons. He received all-Midwestern honorable mention as a sophomore and made the Southern Oregon all-regional first team during the spring.

McLeod plays both striker and on the left wing for the Cardinals, finishing the spring season with three goals and seven assists. He also is an active member of Club Comunidad, which supports immigrant students (especially those from Latin America) with the transition to English-dominated classes and school. “Elijah is one of our strongest headers of the ball,” Lincoln coach Pablo Dipascuale said. “His football intelligence and natural talent is easily noticeable on the pitch.”

Cervantes shared the league scoring title with player of the year Landon Moore of Western Christian as a freshman and hasn’t lost his scoring touch this season. He proudly wears his Mexican-American heritage but learned there are limits to how to display it, as coach JJ Gonzalez explained. “In trying to prove his spice tolerance, he ate an overflowing spoonful of one of the world’s spiciest hot sauces after a game,” Gonzalez said. “He ended up in the bathroom throughout the entire food stop! Thankfully, he was OK and recognized that some things are just not worth proving to others.”

The younger brother of two-time Class 4A player of the year Jayden Esparza could one day surpass big brother on the pitch. He led the Eagles in scoring during a 12-0 spring season that ended with a 4A Showcase championship, making the all-state first team, and had 10 goals in their first nine games this season.

Dubon made the all-Intermountain team each of his first three high school seasons, including the first team the past two years. Entering the final month of the regular season, he had 31 career goals and 13 assists. Dubon made the High School All-American Watch List this year and is considering offers from Grand Canyon, James Madison, Dayton, Santa Clara, Gonzaga and the University of Portland. “Jaden’s drive and determination are the two characteristics that have helped mold him into a standout student-athlete,” Eagles coach Jaime Rivera said. “What sets Jaden apart from others is his kindness and thoughtfulness, and at the same time his ability to turn into a competitor that will do anything to help his team win.”

Esparza is a two-time Class 4A state player of the year, winning the honor in 2019 with 20 goals and 15 assists when the Eagles lost to Woodburn in the state final and again during the spring, scoring nine goals and leading them to the 4A Showcase championship. He had 11 goals during Stayton’s 8-1 start this season. “His leadership is hard to put into words,” Eagles coach Chris Shields said. “He has a different level of expectations and competitiveness that’s tough to explain, but I have seen it only a few times since I have been here at Stayton. He just makes everyone around him play harder. He is a player counted on to close out games.”

Gikas loves playing chess in his free time, and he sets up opponents on the soccer field as he would on a chess board. He had nine goals and six assists during the spring season. “He’s a very strong and clean technical player, a crafty and creative dribbler that is able to lose defenders and create his own shot with uncanny accuracy on frame,” Falcons coach Monty Hawkins said.

Grizzlies coach Abdiaziz Guled has great expectations for Jacobson. “Mario is a fast player with a hard kick who will make goals happen for us,” Guled said.

Harris was a second-team all-Northwest Oregon selection as a sophomore, when he wrapped up the season with two goals and being named player of the game in leading the Falcons to the Class 5A state title. It marked the start of an outstanding career that has seen him become one of the state’s top attackers. La Salle Prep coach Monty Hawkins called him “a magician on the ball, with a change of pace and direction that is nearly unstoppable at the high school level. He is a prolific goal scorer in combination or isolation, be it a 25-yard long range shot or a perfectly placed volley, and he is a clinical finisher on the break. An electric player that is fun to watch.”

Figueroa, known as “Santi” by his teammates, belts out songs at the top of his lungs while riding to games and delivers goals for the Cobras once he arrives, making the all-league second team as a sophomore. “He is a goal poacher and can sniff out a goal from nothing,” Central Linn coach Hans Schneiter said. “He always looks to run behind the defense and has a deadly high-powered shot.”

Glass twice has made the all-Intermountain second team after spending his early years competing in gymnastics. He also is an avid snowboarder who takes advantage of the abundant opportunities that Central Oregon affords him. “Tristan is a highlight reel waiting to happen,” Ravens coach Jimmy Kim said. “He is an explosive goal scorer who can go off at any moment.”

Metzger was a first-team all-Metro selection as a junior. He had a brace in the Apollos’ opener this season and has kept up his strong play. He started his career at left back, but Sunset coach Conrad Buck moved him to striker during the spring, where he shows off his versatility in the attack. Buck also lets Metzger have the final word before every game, knowing his pep talks will get the team appropriately fired up. “Shinjiro is the heart and soul of this team,” Buck said. “He is a versatile attacker who can beat defenders seamlessly with foot skills, physicality and speed. Often, opponents have to resort to double-teaming Shinjiro, which opens up other avenues of attack, and he still finds a way to get free.”

Russell slides between striker and an attacking center midfielder spot for the Cardinals. He had six goals and five assists during the spring. “Alden has a high IQ for the game and shows it with his play,” Lincoln coach Pablo Dipascuale said. “He also helps us in consistently staying cool, calm and collected during high-intensity moments of a match.”

Hudson is the Pirates’ main scoring threat, scoring 20 goals with nine assists during the spring season and earning first-team all-district honors for the second time. “Benji has worked hard to become a top forward in the state,” Dayton coach Jony Miramontes said. “His speed and awareness of the game make him always a threat on top.”

Martinez is a two-time Skyline Conference player of the year (as a freshman and junior) and has made the Class 4A all-state first team twice. He had 24 goals and six assists during the spring season to give him 54 goals through his first three seasons. He also is a gifted drummer, but it’s his “enthusiasm and passion for the game of soccer, his team and life that make him an inspiring figure to be around,” Pirates coach Chris Gallegos said. “He will go on to do great things.”