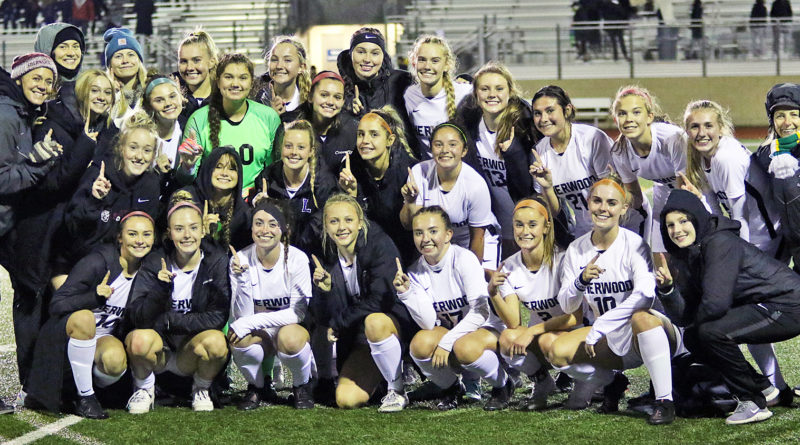 Well, with their performance in their conference finale, the Bowmen likely provided all the proof they needed.

Sherwood clinched the Pacific Conference championship in impressive style, running to a 6-0 win over Liberty in a conference finale played Monday at Liberty High School in Hillsboro.

“It’s pretty big. We fought really hard to get here,” said senior forward Amanda Gribble, who scored two goals for the Bowmen in the victory. “After a tie with Forest Grove (a 2-2 deadlock in a conference opener played Oct. 4 at Forest Grove), we weren’t really sure how well it was going to go, but it feels pretty good to win it.”

“I think this was pretty big, especially coming off a COVID year,” said junior forward Ella Weathers, who had a goal and two assists. “It was good to have a normal season, and we were able to work together and reach our goal of winning league.”

With the victory, Sherwood finished the regular season with a 5-0-1 record in Pacific Conference play (6-3-6 overall), putting the Bowmen alone in first place in the final conference standings. McMinnville finished second at 4-2, and Forest Grove was third at 3-1-2.

After the conference-opening tie with Forest Grove, Sherwood won its next five conference matches, outscoring those five opponents 24-1 on its way to claiming the conference crown.

“It’s a big goal for us,” Gribble said of the Pacific Conference title. “I think communication was a big key for us. We worked really hard in practices, and all the pieces are finally clicking together.”

“It’s really big,” Weathers said. “That’s our goal every year, and especially this year, because we have so many seniors. We wanted to do it for the seniors.”

Liberty moved to 3-3 in conference matches (8-5-1 overall), putting the Falcons in fourth place in the final Pacific Conference standings.

“For our team, the competitiveness is something that we really look for,” Liberty senior defender Kendra Anderson said. “So, even if we know we’re playing a very hard match, we want to fight to the end, because that’s something that we’re proud of doing.”

Sherwood, with the conference title in its sights, got off to fast start to Monday’s match. After a couple of early shots on goal, taken by Gribble and senior Ellie Schmidt, which were saved by Liberty sophomore goalkeeper Kylie Cousins, the Bowmen were able to break through.

Sherwood senior Kaila North, gathering the ball out of a scramble following a pass by Weathers from the right side, smacked a shot from 10 yards into the right side of the Liberty goal, giving the Bowmen a 1-0 lead with 30 minutes and 24 seconds left in the first half.

Less than three minutes later, Sherwood upped its lead to 2-0 when junior Lainee Derry hit a free kick shot from 35 yards on the left side, with the ball deflecting off a Liberty defender and then sneaking inside the right post of the Falcons goal.

“I think it was our desire to get the league title all to ourselves,” Gribble said of the Bowmen’s fast start to the match.

Liberty also had some first-half highlights. With less than 26 minutes before the break, Falcons junior defender Megan Stoffregen made a sliding block of a Sherwood shot, coming off a Bowmen corner kick, knocking the ball over the end line just in front of the right post of the Liberty goal. Falcons junior Morgan Keller then headed away Sherwood’s ensuing corner kick following Stoffregen’s block.

Liberty had two first-half shots on goal, both coming on free-kick shots by Anderson, with Sherwood sophomore goalkeeper Charlotte Overton making a save on each of those attempts.

“I love taking the free kicks,” Anderson said. “When you hit them perfect, it can be good.”

Gribble opened the scoring in the second half. After stealing a Liberty pass in the back, Gribble immediately fired a shot from 15 yards, with the ball sailing inside the right post of the Falcons goal, increasing the Sherwood lead to 4-0 with 31:20 left in the match.

Gribble, with some help from Weathers, soon struck again. Weathers, from the right side, fired a shot toward the Liberty goal that was blocked by a diving Cousins. Gribble, following the play, hit a close-range follow-up shot into the back of the net, making the score 5-0 with 27:16 remaining.

“Ella and I are the dynamic duo. I always find myself on the end of her crosses,” Gribble said. “Ger (Sherwood assistant coach Geraldine Rumpf) wanted me to go out there and have the hunger to score (in the second half). That felt pretty good.”

Weathers would get Sherwood’s final goal. After taking a pinpoint through pass from senior Sophia Blair, Weathers converted an open shot from 10 yards, making the score 6-0 with 6:33 to play.

“I was waiting the whole game to get a goal, then I did,” Weathers said with a smile. “It was a great ball by Sophia. I was one-on-one with the keeper. I knew she was on one side, so I just slotted it on the other side.”

Liberty had one shot on goal in the second half, but it was a thrilling one. Anderson, lining up the ball on the midfield stripe, hit a long, line-drive shot on goal that Overton, and the Sherwood defense, had to scramble to knock away before it got over the goal line.

“Oh my gosh, I thought it might get in there,” Anderson said.

Sherwood had 13 shots on goal and eight corner kicks. The Bowmen defense, including Schmidt, junior Taylor Holt, Derry and senior Reese Clouser, among others, limited Liberty to three shots on goal.

“It was communication. That was key,” Gribble said.

“It was a lot of fun. I’m so glad we won,” Weathers said. “It’s our last league game, so I wanted to play my heart out.”

Liberty had three corner kicks to go with its three shots on goal, all coming on free-kick attempts by Anderson.

“It’s my senior year, and I’m looking to have a lot of fun. I play center back, but I’m always looking to go forward,” Anderson said. “My philosophy has always been, if you work hard, and your team plays hard, and you play your game, then it’s a good game. Even though we lost, I think we played really well tonight, and I’m happy with our team.”

Both teams are now looking ahead to the Class 6A state playoffs, which will open with first-round matches Saturday. Sherwood will very likely open the playoffs at home against a yet-to-be-determined opponent.

“I feel like, if we keep playing the way we’ve been playing, they’ll be good for us,” Gribble said.

Liberty, which very likely will start postseason play with a road match, will be looking to benefit from its contest with Sherwood in the playoffs.

“As much as this might hurt in the moment, I think it was a good thing, as a team, to kind of unite us and realize that, no matter what, if we play our game, that’s something we can be proud of, no matter what happens,” Anderson said.