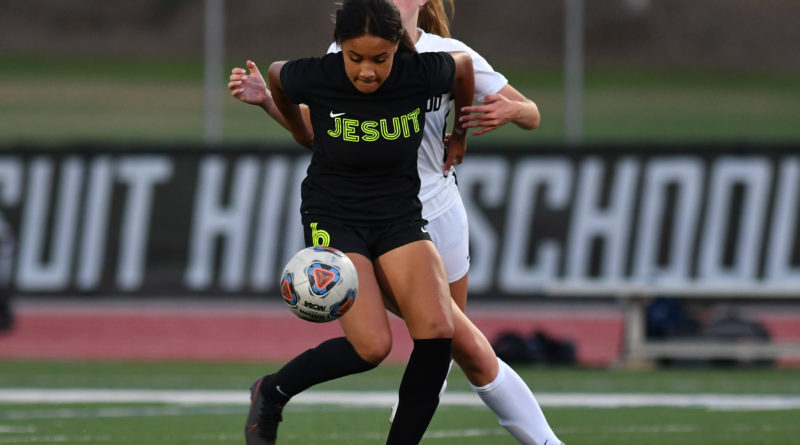 This week, we’re taking a position-by-position look at some of the top players in Oregon high school girls soccer. Our second list focuses on the defenders. (Goalkeepers)

There are hundreds of standout soccer players in Oregon and these lists are not intended to be comprehensive! Let us know about any other defenders you think should be added.

The twin sister of star striker Elle Frazier is a standout on the back line and will join her sister at Portland State next season. Liv suffers from popliteal artery entrapment syndrome (PAES), a rare vascular disease that compresses an artery that runs through and behind the knee. After having the disease initially misdiagnosed, she has gradually returned to the lineup this fall.

Rojas-Soto was a second-team all-Intermountain center back when the Riverhawks went 4-4-1 in the spring. “She organizes the back well and does an excellent job of delaying the opponent,” coach Colby Tonn said.

Rojas-Soto, who made the all-Intermountain honorable mention list as a junior, teams with sister Marisa to form a formidable center back duo — although Monica also will play a central defensive midfield role at times. “Monica reads the game well and steps in to break up opponents’ attacks,” Riverhawks coach Colby Tonn said.

Thomsen-Marr, the younger sister of former Lincoln standout Ashlin Thomsen-Marr, has held down the starting left back job since joining the program as a freshman during the spring season. She is a standout lacrosse player with 31 goals and nine assists last season and was selected to the Under Armour All-America underclassmen event in July. “Eva is crucial to the team’s success,” Cardinals coach Lainey Hulsizer said. “Not only is she fast, but she can also distribute the ball up the field.”

Watts started at center back for the Spartans the past two seasons, making the all-Sky-Em team both years and the 4A all-state first team as a junior. Unfortunately, her senior season was cut short by a knee injury. “I was devastated because as a coach, I know how much this season means to her and how much she means to this team,” Marist Catholic coach Stefan Schroffner said. “But Anna has taken her injury in stride and is now playing a critical role for our team in her captaincy and guidance for teammates, especially the younger players.”

Reid has battled injuries throughout her career, missing 12 of the past 24 months, but she’s being counted upon this season to add experience and stability to an otherwise youthful back line that often includes two sophomores and a freshman starting beside her. “Daphne is a great player who is fast, physical, and reads the game well,” Guardians coach Josh Richards said. “She’s not just a phenomenal athlete, but an all-around terrific defender and a huge piece to our success.”

Erickson, an honorable mention all-Three Rivers selection as a freshman, is part of the next group of Tigers that coach Scott Eggleston hopes can get the program past the first round of the Class 6A state playoffs for the first time since 2015.

Marynik is a Portland State commit who made the all-Mt. Hood Conference team last season. She was a West Region ODP selection to the national camp in Florida and made the High School All-American Watch List in the preseason. Her coach, Jay Jacobsen, will help coach the West team at the all-star game. “Erin loves the game, and it shows with her passion and knowledge on the field,” Jacobsen said. “Erin is one of the best defenders in the state and a top talent in the region. She is a captain and a leader who I’ve been lucky enough to coach over the last three years. She takes great pride in being a Bruin and playing for her school.”

Grunkemeier has been a key member of the Crusaders’ back line since starting as a freshman on the third of their back-to-back-to-back Class 6A championship teams. She’s gone from being the newcomer that year to the veteran of a young defense this fall that conceded only two goals in its first seven games before a 3-1 loss to Beaverton on Oct. 4 snapped the team’s 76-game undefeated streak.

Reos has anchored the Pirates’ defense the past two seasons at center back, making the all-district second team during the spring, when Dayton allowed just four goals. This season, the Pirates posted six shutouts as part of an 8-2 start. When not playing soccer, you’ll likely find her paddleboarding with teammate and good friend Kya Kearns. “Despite her smaller size, she is very quick and strong and does not back down to anyone,” Dayton coach Pat Myer said.

Collins is a two-time all-Northwest Oregon selection, making the first team as a sophomore. She was named to the All-American Watch List in the preseason. “Kate is the leader of our back line,” Falcons coach Andrew Frazier said. “Kate’s ability to gather balls out of the air has been crucial to our team’s success.”

McDougal led a stout Wildcats defense as a sophomore, when she received second-team Class 5A all-state recognition and the team reached its first state final since 2011. She joined teammate Lindsey Antonson on the High School All-American Watch List in the preseason. “Having a defender who makes a solid impact on both our attack and defense has been a huge benefit to our team,” Wilsonville coach Dallas Malone said. “Katelyn is able to defend with such calamity and intent. She has been able to successfully hold down our defense while also creating chances in the attack.”

Becraft is a three-sport standout for the Highlanders, playing soccer, basketball and track and lettering in each sport every year of her four-year career. On the soccer pitch, the Montana State-Billings commit made the all-Midwestern second team as a sophomore and scored three goals in North Eugene’s first five games this season — all off corner kicks. Highlanders coach Brandy Wormdahl said Becraft’s teammates all agree, “if you ask any of them who brings the fire to our games, all would say, ‘Becraft.’ She is one of our most intense players and is, by far, one of the hardest-working and most consistent players I have ever coached.”

Canaday-Elliot, who has played in the Thorns Academy, plays all over the field for the Mountain Lions. Her main position is center back, but McDaniel coach Larry Hermida will shift her to midfield or striker when needed. She also is a standout on the track, winning the PIL district triple jump title as a freshman and placing sixth at the Class 6A state meet.

Scott anchors the Bruins’ defense as a center back and earned all-league recognition as a freshman. Brookings-Harbor allowed six goals (third-fewest in 3A/2A/1A) through eight games this season. “Marissa has an ability to read an attacker and use her body position and speed to turn them back,” Bruins coach Brian Carlson said. “She has established herself as a leader in the defense, using her voice to help to direct the back line. She always accepts the challenge of taking on the opposition’s best attackers.”

Robertson has moved into the starting spot previously occupied by all-state first-teamer Olivia McCoog and helped solidify the defense. Aardvarks coach Justan Wolvert described her as “athletic and physical. She reads the game well.”

Fitzpatrick is a four-year varsity starter who can play outside or center back. She made the all-Sky-Em team as a sophomore, and Spartans coach Stefan Schroffner said “there wasn’t a better attacking outside back in the state.” She returned this fall after missing most of the spring season because of injury. “Reese is a talented, all-state level defender,” Schroffner said. “She’s very versatile in that she has the speed and stamina to play outside back, but also the height, physicality, technical skill and vision to play a commanding center back.”

Kane moved onto the Cardinals back line this season and helped solidify a group that allowed just 10 goals in a 7-3-1 start. “Sarah has stepped into the defense with confidence and will continue to be a leader in the backfield,” Lincoln coach Lainey Hulsizer said. “She has a high soccer IQ, great attitude, and isn’t afraid to join the attack.”

The Mavericks graduated nearly their entire backline from the spring, when they allowed just eight goals in an 8-2-1 season. The only returner is Nees, who had a goal and two assists during the spring. She has committed to Saint Martin’s. “Sierra has stepped in and taken the lead for our back four,” Mountainside coach Travis Schoonover said.

Hanke often can be heard during games saying, “Use your body or sacrifice your body,” to inspire her teammates to play aggressively. It was working early this season, as Scappoose started 5-1-1 and outscored opponents 24-8. “She has endurance and speed that contributes to the team in those fast-paced games when the competition is high,” Scappoose coach Bruno Zanotta said.

Despite being a sophomore, Bullard has become a veteran leader on a young Aardvarks back line that allowed just seven goals through six games — four of those coming in an early-season loss to Class 6A Grant. “She’s physical with great anticipation and a great ball striker,” said Oregon Episcopal coach Justan Wolvert.

Rowland was a first-team all-district selection as a freshman, splitting time between center back and center midfielder. During the spring season, the Cobras did not field a girls team, so Rowland played on the boys team and earned all-league honorable mention. She has lettered in four sports in her first two years, plays alto and baritone in the school’s concert and pep bands, and is in line to be valedictorian of the class of 2023. “On the field, she combines power, technique and grace as she snuffs out attack after attack,” Central Linn coach Hans Schneiter said. “She reads the game phenomenally well, has an excellent range of passing with both feet, and can hit a long shot accurately from over 40 yards out.”

Rogers is the type of player a first-year coach like Jonathan Hills can build a program around. “As a freshman, I’ve been blown away by the ability, skills and strength that Jordynn has,” Hills said. “She is a team player through and through and has a vision for the game and her team that is impressive to see. She’s going to be a vital part of this team for years.”

Gabriel swings between two very different positions for the Cardinals, moving from center back to an offensive midfielder depending on what the team needs. She was a second-team all-Tri-Valley pick during the spring. “Vicky was silent as a sophomore, but she’s an incredibly strong player who began to open up as a junior,” Corbett coach Mark McIntire said. “She’s now probably the best captain I’ve ever had. She brings the team together, is a leader on and off the pitch, and plays any position incredibly well. Our team is lucky to have her.”