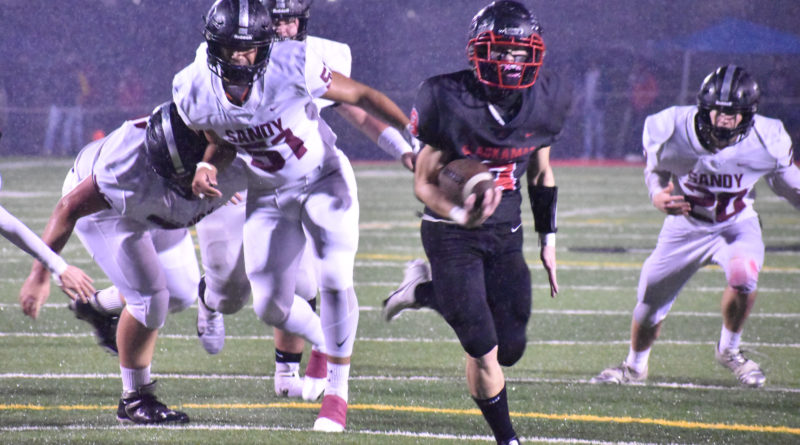 It was fourth-and-1 deep in Sandy territory when Clackamas junior Luke Ash took the handoff and zipped to his left. He needed one yard to move the chains. He got that in a blink and kept slashing toward the end zone, scoring on a 13-yard run to put up the first points in the Cavaliers’ 41-6 home win over Sandy last week.

“In my head, I was thinking let’s get this first down,” Ash said. “More opened up, and I took it to the house.”

Ash has a way of delivering more than what is required.

“He’s a guy we trust, and he executes at a high level,” Clackamas coach James Holan said. “He makes one cut and can go the distance, and no one is going to catch him.”

Ash leads the Mt. Hood Conference with 15 touchdowns and is third in rushing with 791 yards. He is quick to share the credit with his offensive line that lays down smooth passage like a bulldozer rolling over fresh asphalt.

“Our running game is insane,” Ash said. “We have the best linemen in the state. They get it done in the trenches, and it all works out. Sometimes, I feel like I could drive a car through the holes.”

That group up front includes a couple of Division I commits in tight end Kaden Ludwick (Colorado) and left tackle Kage Casey (Boise State), along with fellow seniors Logan Chastain at center, Levi Jameson at right guard and Hayden Harlan at right tackle, and sophomore Devin Brooks at left guard.

“Our running game is always strong — we take pride in it,” Casey said. “We did the math. We average 277 along the O-Line, and that benefits us every week. We get off the ball fast and into our guys.”

“We’re really big, and we feel like we have the advantage every game — we want to dominate up front,” Harlan added.

The linemen are a tight-knit group that met often for offseason weight room sessions or to go through footwork drills on the field. They also gather for weekly dinners, which break into video games or pickup basketball — imagine Charles Barkley going 1-on-1 against Shaquille O’Neal.

“We’re a very physical bunch of linemen out there trying to play basketball,” Chastain said with a laugh.

With half of the Cavaliers’ games going to the running-clock rule, Ash has piled up his impressive numbers early in games before giving way to the second unit.

“We are just bigger than a lot of people. It’s nice to set the tone and pound the rock,” Chastain said. “It’s old-school football. We just go out there and out-physical the other team.”

The Cavaliers have kept defenses guessing all season by balancing the scales between attacking through the air (1,379 yards and 18 TDs) and on the ground (1,143 yards and 24 TDs).

“We always want to be balanced. We’ll take what the other team is giving us,” Holan said.

Clackamas (9-0) and Central Catholic (9-0) have been on a collision course all season and will meet Friday night at Hillsboro Stadium in a showdown worthy of its audience on ESPNU.

“Coaches don’t like distractions, but this is a chance to show what Oregon high school football is all about,” Holan said. “Any time you are playing for a league championship at the end of the season, it’s a big game.”

Central Catholic comes in as the highest-scoring team in 6A at 44.1 points per game, while Clackamas boasts the top defense, allowing less than a touchdown per game.

“We are longtime rivals. We have wanted this one for a long time,” Casey said. “Now is the time to see who is best.”