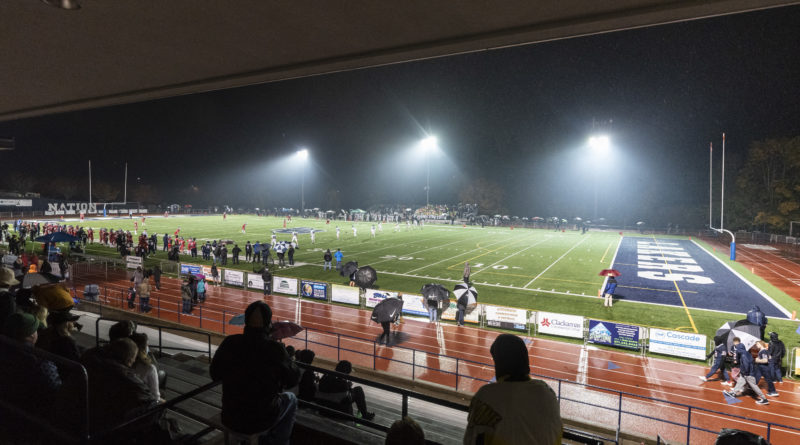 Here’s what stood out during the eighth weekend of action.

League championships on the line this week across the state

Week 9 is often rivalry week in high school football, but this fall, the final week of the high school football regular season brings a multitude of de facto league championship games that should whet the appetite for what promises to be a fascinating postseason.

Let’s start in Class 6A, where after seeing the Southwest Conference title decided in Sheldon’s wild 49-47 victory over Roseburg on Friday, we’ll see two more championships on the line this week.

The Pacific Conference race comes down to the past two champions — 2019 titlist Sherwood and 2018 winner Liberty — dueling in Hillsboro. The Bowmen have rebounded from an 0-4 start to sweep through their first four conference opponents, while the Falcons boast Class 6A’s second-highest-scoring offense at 44 points per game.

On the other side of Highway 26 at Hillsboro Stadium, the Mt. Hood Conference title will be decided between Central Catholic and Clackamas. The previous two full seasons, these teams met as division champions in a conference championship game, with the Cavaliers winning in 2018 and the Rams in 2019.

The 5A NWOC West championship comes down to four-time defending champion Wilsonville traveling nine miles down the road to Canby, which last won a league title in 2009, when it reached the Class 6A semifinals. The teams are a combined 15-1 entering the contest, with the Cougars’ only loss coming by three points to West Albany in Week 2.

Class 4A has three conference titles up for grabs in the final week, including the much-awaited Sky-Em matchup between No. 4 Marist Catholic and No. 1 Marshfield. The teams finished second and third in the spring’s 4A Showcase and boast two of the classification’s top offenses, led by offensive player of the year candidates Lucas Tuski of Marist Catholic and Dom Montiel of Marshfield.

The Cowapa title is on the line at Banks, where the three-time defending champion Braves will play host to Tillamook (see more below), while 2019 state champion La Grande and Eastern Oregon rival Baker will battle for the top seed from the Greater Oregon League — the Tigers have already clinched a share of the hybrid 4A-3A league title, but the No. 1 playoff seed comes down to games played within the classification.

While the Three Rivers League doesn’t have a championship game in the final week, its rivalry games will still play a role in determining whether the crown gets split two, three or four ways — or goes to a single team.

The Lions close with Oregon City in the Battle for the Bridge, while the Timberwolves (at Tigard) and Lakers (at Lakeridge) finish with district rivalry games.

If the top three all pull out victories, they would split the title three ways. One loss by any of the three means a two-way share, with the head-to-head victor getting the No. 1 seed in the state playoffs. If two of three lose, the lone victor would win the title outright.

How do we get to a four-way split? If all three leaders lose, that would leave them 3-2 in league play, with Lakeridge joining them atop the standings — and meaning an extra-large order from the trophy shop.

“This is the hardest league in the state of Oregon,” said West Linn lineman Braylon Cornell. “I think the state champion is coming out of this league for sure.”

When McKay lost back-to-back games in Weeks 5 and 6, it looked as if this might be another in a string of disappointing seasons the program has endured since its last playoff appearance in 2010.

The past two weeks, however, have seen the Royal Scots right the ship with a couple of dominant road victories at Hillsboro and St. Helens, positioning themselves to make the postseason entering their Week 9 matchup against city rival North Salem.

“It’s exciting to be in this position at the end of the year, especially since it’s something we’ve been working towards since last spring,” said third-year coach Brandis Piper. “This is a great opportunity for our kids and community, one that our players are embracing, and I couldn’t be prouder of how they are handling themselves.”

Piper credited a defense led by senior linebacker Josiah Garibay that has forced seven turnovers (including an interception by Garibay) in the past two games and winning battles on first down for much of the reason for their midseason turnaround.

The Scots also have seen marked improvement from sophomore quarterback Kyrin Fuimaono, who has thrown for almost 600 yards and eight touchdowns behind a developing offensive line. Another sophomore, Justice Anthony, has been a two-way menace, catching three touchdown passes and intercepting three passes.

“We’ve started to click consistently offensively, especially with great maturity from some of our younger players,” Piper said.

A victory Friday over North Salem would lift McKay into a tie for third place in the NWOC West standings with the Vikings and Scappoose — assuming Scappoose wins its rivalry game at home against St. Helens. The top three finishers receive automatic berths in the Class 5A playoffs.

The field also receives four at-large berths, and McKay currently occupies the final spot in the bracket with an OSAA ranking of 15th. A win would bolster its ranking and should be enough to get the Scots in the field, while a loss wouldn’t doom their chances — it would just lead to some anxious moments while results trickle in from around the state to see whether the Scots’ ranking holds up.

“Our guys have bought into each other and are really a family, which is why we are in this spot,” Piper said. “We’ve been focused on taking everything one day and one rep at a time, which helps us stay grounded in the moment and focus on the task at hand. The atmosphere on Friday will be a lot of fun. I’m excited for it.”

One down, one to go: Tillamook needs one more win to secure Cowapa crown

Tillamook coach Kye Johnson has a unique perspective on his team’s fortunes entering the Cheesemakers’ Week 9 showdown at Banks for the Cowapa League title.

Johnson is the only member of the coaching staff who isn’t a former ’Mook, and with the team one win from earning a first outright league championship since 1998, he’s enjoyed watching his staff’s excitement growing alongside the current players.

“This has been a real enjoyable group to be around and coach,” Johnson said. “Our guys have been excited all season. They’ve been ready for the challenge each week.”

Tillamook earned this shot by knocking off coastal rival Seaside 28-3 on Friday, with senior quarterback Trent Buchler throwing for one touchdown and running for another, and junior Gilbert Whitlatch running for two scores.

Johnson hasn’t been afraid to challenge his team this season. Besides their regularly scheduled games against Marist Catholic and Cascade, he picked up a game against top-ranked Marshfield after both teams had league opponents forfeit games in Week 7.

Although the Cheesemakers lost all three games, Johnson said the team benefited from the experience.

“It’s helped us grow,” he said. “We just have to keep focusing on getting better, no matter what week it is or what’s on the line.”

What’s on the line this week is the Cowapa League championship, which Tillamook has never won — its last league titles (outright in 1998 and a share with Philomath in 1999) came when it was a member of the old Val-Co League.

Banks has won 14 consecutive games in a series that dates to 1977, with the Cheesemakers’ last victory coming in 2006.

“A benefit of having played a strong schedule is that we’ve been through the process of preparing for and playing against good opponents,” Johnson said. “There are a lot of good teams in 4A right now, and we’ve seen a bunch of them this season. Banks is another good opponent.”

When Jacob Peterson left Newberg for a second time in 2020 to take over a Dayton program coming off back-to-back 3-6 seasons, he acknowledged it was a difficult decision.

Peterson had left the program once before — in 2017, when he left for Sheridan and led the Spartans to their first league title in 36 years in his second season.

He returned to Newberg in 2019 as defensive backs coach and helped the Tigers allow a Class 6A-low 143 points that season.

But he couldn’t pass up the chance to take over a Pirates program that has a championship pedigree — nine appearances in the Class 3A final and seven titles, the last coming in 2012.

His first season, during the pandemic in the spring, finished 2-4, but Year 2 has the Pirates poised to win a first outright league title since 2016. They’ll make the 10-mile drive to archrival Amity this week, looking to defeat the Warriors for the first time in five years and deny their rivals a first title since 2009.

“Having success is always great, but what is important is the way our players have changed the culture of the program,” Peterson said. “The community can be proud of these young individuals regardless of the outcome.”

The Pirates got to this point with a 9-7 victory at Philomath last week, with sophomore Zach Smith scoring the go-ahead touchdown midway through the fourth quarter.

Peterson didn’t implement any wholesale changes during the offseason, instead relying on the natural evolution of a program from the first to second seasons under a new coach.

Smith leads a balanced running attack with 595 yards and six touchdowns in six games (two of Dayton’s victories were by forfeit), and junior Nate Arce has run for 511 yards and a team-high seven scores.

While the Pirates rely on sophomores and juniors to fuel their run-heavy offense, a couple of seniors — linebacker Dylan Phipps (47 tackles, two sacks) and cornerback Kyle Troutman (32 tackles, three interceptions) — and sophomore lineman Morgan Gallagher (44 tackles, nine for loss) lead a defense that has allowed 14 points per game.

“The offseason weight training and development program has taken over on the field, and we are physically able to compete this year where we could not last season,” Peterson said. “We are smarter all around the field, and we have developed our students to play more fundamentally and as a team at all positions.”

Peterson, who still teaches at Newberg High School, can sense the anticipation building in the farming community of around 2,500 people about this week’s game but said he tries to block it all out.

“I’d guess people are excited, but I honestly pay no attention to anything other than preparing for whoever is next on the schedule,” he said. “We play our game. We care about being ready to execute and playing our best.”