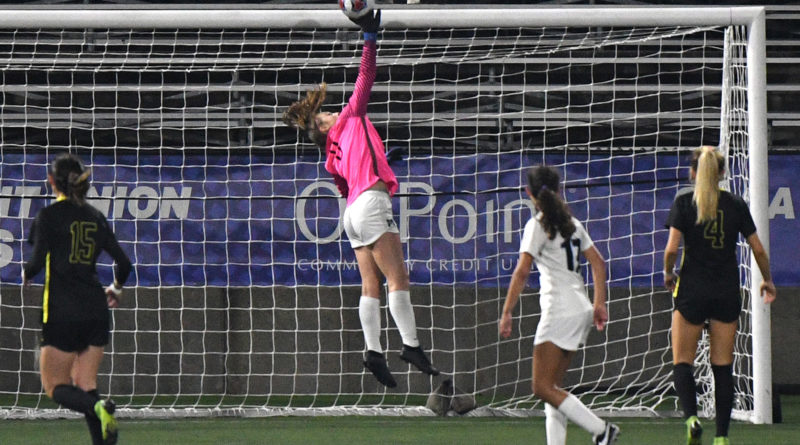 This week, we’re taking a position-by-position look at some of the top players in Oregon high school girls soccer. Our first list focuses on the goalkeepers.

There are hundreds of standout soccer players in Oregon and these lists are not intended to be comprehensive! Let us know about any other keepers you think should be added.

Gabrielson is one of many youngsters Aardvarks coach Justan Wolvert is relying upon to get the team to a 10th consecutive Class 3A/2A/1A state championship game. She posted a shutout of No. 1 Catlin Gabel, making two spectacular second-half saves to preserve the 1-0 victory. “Very athletic and a great shot-stopper with great reflexes,” Wolvert said.

Cunningham took over for first-team all-Mountain Valley keeper Abbey Knoll during the spring season and made sure there was no dropoff in net. She recorded nine shutouts and had an 0.35 goals against average in making the Salem-area all-conference first team. This season, the University of South Dakota commit had a 1.30 GAA during the Titans’ 3-5-2 start. “She’s an excellent shot blocker along with having the necessary foot skill to play out of the back,” West Salem coach Benje Orozco said. “Having her in goal gives our team confidence and allows us to take intentional risks.”

Pressnell has established herself as one of the top goalkeepers in the Northwest. A three-time all-Three Rivers first-team selection and two-time conference player of the year (2018 and 2020), she also was an ECNL Northwest Conference first-team pick for her club team. The University of Portland commit allowed two goals in 11 games with nine shutouts for the Pacers during the spring and had a 1.00 GAA in their 2-4-3 start this season. “Abby is by far the best goalkeeper I’ve seen in high school soccer,” Lakeridge coach Nick Lewis said. “Not only is she a great player but she’s also a great leader both on and off the field.”

Waibel had six shutouts in nine starts during the spring and made the all-Mt. Hood first team. She had three shutouts during Barlow’s 5-2-3 start this season and has offers from Western Colorado, Missouri Baptist and the College of Idaho. “Camryn is a smart, agile and athletic goalie who has a ton of experience,” Bruins coach Jay Jacobsen said. “She is a vocal leader and a big-time player in goal for us.”

Stepp took over the starting job during the spring season, and she was a first-team all-Tri-Valley and second-team Class 4A all-state selection. She made 35 saves on 41 shots and posted six shutouts in 10 games. She had four clean sheets in the Gladiators’ first five games this season. “Emersyn is a great shot blocker and defensive leader,” Gladstone coach Tyler Lewis said. “She has the ability to make some incredible reaction saves. Emersyn has good distribution and a very long punt.”

Crabtree took over in the spring from Class 6A all-state second-team netminder Olivia Williams, and the Guardians haven’t skipped a beat. She posted four shutouts during a 4-4-2 spring season and followed with four more shutouts in a 4-3-3 start this season. “As a team, she gives us the confidence to know that with her in goal, we have a shot in every game, no matter the opponent,” Wells coach Josh Richards said. “Each year, Finley has added to her game and improved as a goalkeeper. This season, it has all come together, and she is playing with the highest level of confidence.”

Hanke is a tall and imposing presence in net, having posted two shutouts and allowed just eight goals during the team’s 5-1-1 start this season. “She takes her role as keeper very personal,” Scappoose coach Bruno Zanotta said. “She came into the role several years ago and hasn’t looked back.”

Cory has the potential to become the next Mavericks goalkeeper to make the Class 6A all-state team, following in the footsteps of Sidney O’Billovich, who backstopped the team to the 2019 state final and is now starting at Portland State. Cory allowed just nine goals during the team’s 7-1-2 start. “She has been a great addition to the team,” Mountainside coach Travis Schoonover said.

Balsiger transferred over the summer from North Medford and immediately took over in net for the Crusaders. St. Mary’s coach Martin Nelson said that if Balsiger weren’t such a strong netminder, she’d be the one scoring the goals, not stopping them. “She has a great touch and finish,” he said.

McArthur was called up to the varsity at Clackamas toward the end of her sophomore season and transitioned to Nelson when the Happy Valley school opened this school year. She hasn’t missed a beat with the Hawks, posting her first shutout Sept. 30 against Reynolds. “She’s a comfortable and confident leader in the back,” said Nelson coach Michelle McHone, who coached McArthur at Clackamas in the spring. “Lola demonstrates an amazing ability to read the ball with incredible agility and stamina to handle continuous shots reaching the ball at all four corners of the goal.”

Woodrum has backstopped the Spartans the past three seasons after serving as their backup keeper as a freshman. In the past two seasons, she had 100 saves and 19 shutouts in 31 games, allowing just 17 goals while making the all-Sky-Em team each year. Woodrum also played shortstop on the school’s 4A Showcase championship team during the spring. “Tessa is a gamer and a competitor,” said Marist Catholic coach Stefan Schroffner. “Over the past two seasons, she’s seen everything from the best attacking players in the state to the high-stakes pressure of a state playoff penalty shootout. She can get to the ground quickly and has good anticipation and sticky hands.”