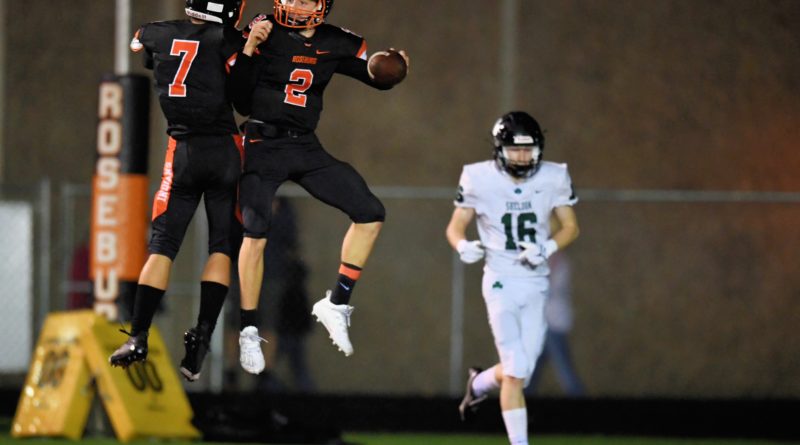 ROSEBURG — It might have been Roseburg’s first loss of the season, but Friday night’s 49-47 defeat at the hands of two-time defending Southwest Conference champion Sheldon was also the Indians’ finest moment.

“It was our best game of the season,” said senior Logan Klopfenstein, who had a team-high nine tackles and caught four passes for 86 yards and a touchdown. “Even though it’s a loss, we put up a hell of a fight.”

Indeed, Roseburg went toe to toe for 15 rounds of this SWC heavyweight title bout, with the outcome not decided until Brock Thomas blocked a potential 25-yard winning field goal by Jackson Bartlett on the game’s final play.

“We can definitely gain confidence from this game,” said senior quarterback Colton Marsters, who threw for 278 yards and three touchdowns and ran for 178 yards and two scores. “I believe everyone played 100 percent, so I don’t think it stopped our momentum. If anything, it’s going to push us harder.”

The Indians (7-1, 3-1 SWC) had already clinched their first Class 6A playoff berth in the past seven seasons, and sitting at No. 11 in the OSAA rankings with just a nonleague finale against Class 5A Springfield left, they likely will get a home playoff game for the first time since 2011.

Their success caught many by surprise. They went 1-4 during the spring season and won just six games over the previous three seasons combined.

What’s different about this season? Klopfenstein and Marsters agree that the players developed a tight bond over the summer.

“I’d say we bought in,” Klopfenstein explained. “We had summer workouts going, daily doubles going, and everybody bought in. We’re pretty much a brotherhood down here, not just a team. I wouldn’t even call us a team — we’re literally brothers.”

They both also pointed to several players changing positions during the offseason, starting with Marsters moving from wide receiver to behind center, as helping spark the turnaround.

Marsters acknowledged still not feeling 100 percent comfortable in his new role, but he looked pretty comfortable leading the Indians on three fourth-quarter drives as they rallied from a 49-34 deficit.

The first answered Sheldon’s final touchdown with a nine-play, 66-yard drive capped by Cayden Eckel’s 1-yard touchdown run. The second was lightning-quick and followed Marsters’ 16-yard interception return to the Indians 41. He hit Hayden Horton on a 24-yard pass, then found Dominic Tatone down the left sideline for a 35-yard score.

Finally, he moved Roseburg into field goal range after its onside kick recovery, sandwiching runs of 9 and 10 yards around a 17-yard pass to Klopfenstein in the final 1:53.

“We moved some people around, and now we have all the right pieces in place,” Klopfenstein said. “We’re moving forward, even with this loss.”