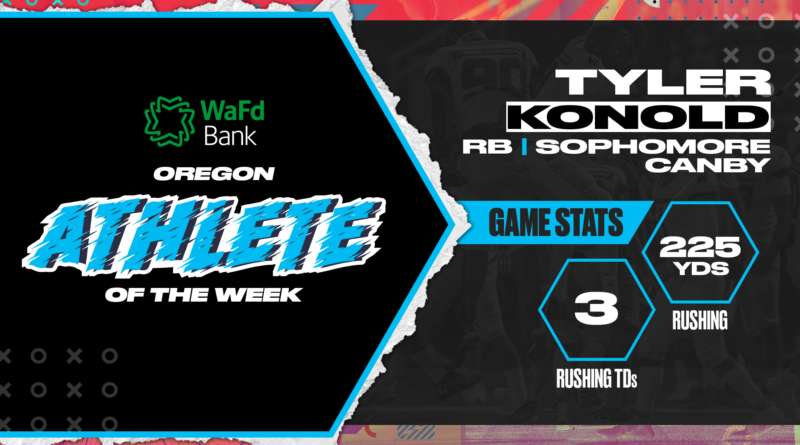 Congratulations to Canby running back Tyler Konold for being voted SBLive’s WaFd Bank Oregon High School Athlete of the Week for Oct. 11-17!

The sophomore rushed for three touchdowns and about 225 yards for the Cougars in their 33-21 victory at Scappoose.

Konold received 36.46% of the vote, beating out Lebanon’s Waylon Wolfe who finished second with 28.43%. Baker’s Malaki Myer finished third with 11.53% and Sherwood’s Cody Hall finished fourth with 6.19%. There were over 53,000 votes tallied this week!

Justice Anthony, McKay: Anthony had three interceptions in the first half of the Scots’ 36-6 win over Hillsboro.

Dominic Borges, Tualatin: Borges kicked a field goal with 2.6 seconds left to lift the Timberwolves to a thrilling 24-21 victory at Lakeridge.

Josiah Davis, North Salem: Davis rushed for 175 yards and a career-high five touchdowns, leading the Vikings to a 35-13 win over Forest Grove.

Jordan Fisher, Westview: Fisher rushed for five touchdowns — two of them on runs of 68 yards — to power the Wildcats to a 48-13 victory against Sunset. He finished with 288 yards, the third-highest total in Class 6A this season. His five touchdowns are the second-most in a game this season, behind Glencoe’s Royce Fasel’s six in Week 3.

Kyrin Fuimaono, McKay: Fuimaono passed for about 250 yards and five touchdowns — connecting for touchdowns with four receivers — for the Scots in their 36-6 victory at Hillsboro.

Cody Hall, Sherwood: Hall made four catches for 197 yards — three for touchdowns — and had two interceptions, one of which he returned 99 yards for a touchdown, in the Bowmen’s 61-35 win over Century. He has nine touchdown catches in his past three games after having one in the first four weeks of the season.

Trenton Hughes, Hood River Valley: Hughes rushed for two touchdowns, passed for two and returned an interception for another in the Eagles’ 54-7 rout of Parkrose.

Earl Ingle, West Linn: The junior turned in a huge play on three consecutive snaps to help the Lions pull away for a 42-21 win over Tigard. Ingle made an interception on the Tigers’ first possession of the third quarter and returned it for a touchdown. On the next snap, Ingle made another interception, and on the next snap, he connected with Barret Brundage on a 50-yard score for a 35-14 lead. Ingle added a third interception midway through the fourth quarter. He passed for three touchdowns — one as a running back and two as a quarterback.

Ethan Jones, Liberty: Jones had six catches for 154 yards and four touchdowns as the Falcons notched a 52-34 win over McMinnville. (story, photos)

Malaki Myer, Baker: Myer returned a punt for one touchdown and ran back an interception for another — both scores coming in the first half — to help spring the Bulldogs to a 27-14 win at Ontario.

Jae’Sean Pete, Grant: In the Generals’ 42-41 double-overtime win against Roosevelt, Pete contributed in all three phases — rushing 23 times for 170 yards and three touchdowns, making an interception on defense and returning a kickoff for a touchdown.

Sam Poole, Sheldon: Poole kicked a go-ahead 35-yard field goal with 1:39 left to send the Irish to a 37-35 victory over North Medford.

Javier Ramirez-Perez, South Salem: Ramirez-Perez rushed for three touchdowns, including the winning one-yard score with 1:52 left in the Saxons’ wild 50-46 victory against Bend.

Austin Ratliff, Silverton: Ratliff had five catches for 133 yards and returned an interception for a touchdown in the Foxes’ 34-7 win over Corvallis.

Sam Stephens, Summit: Stephens, a sophomore, racked up 199 yards rushing and scored a touchdown for the Storm in their 34-17 win over rival Mountain View.

Gus Togni, Lincoln: Togni was in on 10 tackles — including two sacks and three tackles for loss — to lead the Cardinals’ defense in a 45-28 victory against McDaniel.

Miguel Velasquez, Marshfield: Velasquez had 17 rushes for 173 yards and four touchdowns for the Pirates in their 49-13 rout of Tillamook.

Charlie White, Banks: White caught five passes for 85 yards and two scores and led a dominant Banks defense with five tackles, three tackles for loss and a sack in a 38-0 shutout of Seaside. (story, photos)

Sayre Williamson, Mountain View: Williamson broke a school record with a 99-yard kickoff-return touchdown in the Cougars’ 34-17 loss to Summit. He rushed for 143 yards and a touchdown on 28 carries.

Waylon Wolfe, Lebanon: Wolfe spearheaded the defense in Lebanon’s 34-14 victory over Dallas. He was in on 15 total tackles, including two sacks and three tackles for loss. He had a fumble recovery on a sack.