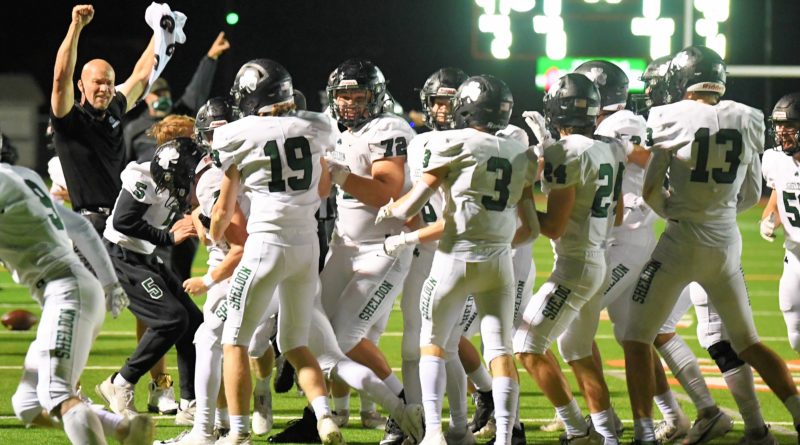 ROSEBURG — The last time Sheldon junior Brock Thomas could recall lining up on special teams before Friday night was in eighth grade.

But with the Southwest Conference championship on the line and the 10th-ranked Irish clinging to a 49-47 lead against No. 9 Roseburg, all hands were on deck.

Roseburg called timeout to line up for a 25-yard field goal with 4.2 seconds remaining on the Finlay Field clock. Junior Grafton Robinson, who normally plays on the field goal block unit, overheard the Irish coaches asking their star quarterback, “Hey, do you think you can block it?”

Thomas answered yes and got placed on the extreme right-hand side of the line.

The ball was snapped. Thomas flew past the wing blocker and laid out.

The thump resounded above the bedlam emanating from both sidelines. The ball bounced backward and spun to a stop in front of an emptying Irish bench at the 35-yard line, still a live ball but no one seemed to notice.

Finally, the officials blew the final whistle, and Sheldon (7-1, 3-0) had survived a wild back-and-forth contest, meaning that with a win next week at Grants Pass, the Irish will secure a third consecutive SWC title.

“All I thought was, ‘I’ve just got to block this. I’ve got to win this for my team,’” said Thomas, who accounted for 541 yards of total offense and made two big plays on the other side of the ball in the final two minutes to preserve the win.

“We knew we could get it done. This team is special. We’ve got a real special team here. I think we can go far.”

Irish coach Josh Line said it was a spur-of-the-moment decision by special teams coach Scott Wright, who returned to the sideline following a battle with COVID last year, to send Thomas out for the decisive play — but one he had no issue backing.

“He’s just a playmaker,” Line said. “We wanted to get some more speed over there, and he’s got a little more speed than most of the guys we have.”

Roseburg recovered the ensuing onside kick after a mad scramble at the Irish 46 and a discussion among the officials that lasted several minutes. Marsters ran for nine yards, threw a 17-yard pass to Logan Klopfenstein, then ripped off a 10-yard run to move Roseburg into field goal range.

“I thought we had it, for sure,” Klopfenstein said. “We just didn’t connect that last dot.”

Marsters then came up big on defense, intercepting a pass by Thomas and returning the ball 16 yards to the Roseburg 41 with 2:13 remaining. He needed two plays to get his team back in the end zone, hitting Hayden Horton for 24 yards before Tatone gathered in a pass around the 20 and dived just inside the left pylon for the score.

“Even though it’s a loss, we put up a hell of a fight,” Klopfenstein said. “I really think this was our best game of the season, and it’ll push us forward. It’ll make us better, for sure, for the next few games to come.”

Those next few games will include the program’s first Class 6A postseason berth since 2014 and, quite likely, its first home playoff game in a decade. Any team making the trek to Douglas County would be wise not to overlook Roseburg.

“We’re not scared of anyone,” Klopenstein said. “We invite anyone to our place. We play vicious, as you could see tonight. We’re ready for the playoffs.”

The Irish also feel they’re rounding into form after a 48-17 Week 4 loss to Lake Oswego rocked them a bit.

“We’ve been able to execute a little better since then,” Thomas said. “We had a couple of mess-ups against them, and with a good team, they’re going to pounce on us, and that’s what they did. But since then, we’ve really grown up and gotten a lot better.”

Still, Coach Line was left breathing a sigh of relief that his team had escaped Roseburg with a 15th consecutive victory in the series.

“We’ve been in so many dogfights this year,” he said. “It just seems to be our lot in life. All our wins have really come at a great cost, but I’m really proud of my kids and how they hung in.”

The main reason Friday’s game turned into a dogfight was the play of the two quarterbacks. Thomas might be the more bally-hooed prospect — and looked the part, running for 205 yards and a touchdown and throwing for 346 yards and three scores — but Marsters, a converted wide receiver in his first season behind center, matched him big play for big play.

Marsters finished with 278 yards passing and three touchdowns and ran for 178 yards and two scores.

“Both offenses are really dynamic, and it’s tough to stop teams that have speed — and Roseburg’s got that in spades,” Line said. “And then you’ve got two quarterbacks that you can’t just drop back in coverage because they’ll take off on you, so that’s when you see big numbers from the offenses.”

Carson Dunn whipped the Homecoming crowd into a frenzy when he stepped in front of Thomas’ pass down the middle on Sheldon’s opening possession and returned the interception 78 yards for a touchdown.

The Irish, though, settled into the game in the second quarter, eventually scoring on seven consecutive possessions.

But every time it looked as if they’d gotten some separation, Roseburg would find an answer.