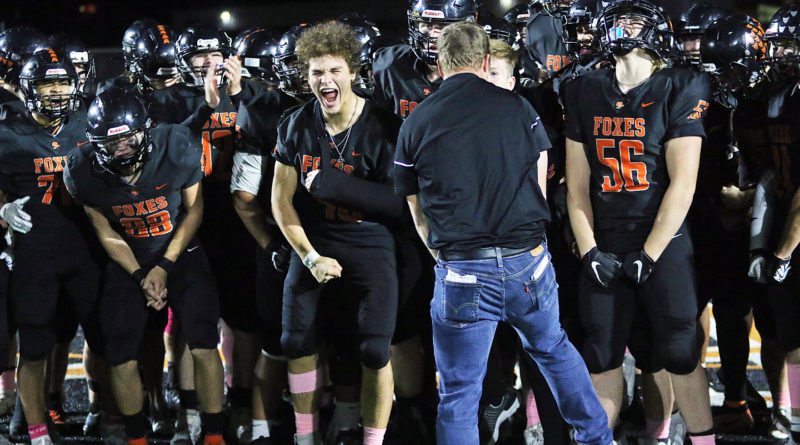 As a standout dual-threat quarterback, Jordan McCarty can be counted on to make many big plays for the Silverton football team.

He certainly made plenty of big plays for the Foxes when they faced West Albany in a Mid-Willamette Conference showdown.

But maybe the biggest play McCarty made all night didn’t involve him throwing or running with the ball. It involved his speed — and his tackling ability.

Silverton, leading 28-21 and looking for one more first down to run out the clock and wrap up the victory, had to put its celebration on hold, as instead of getting the game-clinching first down, the Foxes fumbled the ball. West Albany senior linebacker Gavin Miller alertly scooped up the ball and had no one in front of him as he started sprinting toward the end zone for a possible tying, or even go-ahead, last-minute touchdown.

But the speedy McCarty had other ideas.

Sprinting to Miller, and then making a diving — and perhaps game-saving — tackle, McCarty brought Miller down at the Silverton 38-yard line with 27.8 seconds left. From there, time would run out on the Bulldogs, and the Foxes got to celebrate a dramatic victory in the game played Friday in front of a huge, boisterous crowd at Silverton High School.

“Oh, this is big,” a smiling McCarty said. “Us and West is a big rivalry, pretty much all year. They’re always good, and we’re always pretty good. Our guys came to play. We played hard, and I think we deserved the win.”

“Yeah, I was scared — we thought they were going to come back, and they were really close to it,” said Silverton senior receiver Vandon Fessler, who had a touchdown reception. “This is really big. We’ve been looking forward to this game all season.”

With the victory, its sixth in a row since a road loss to Class 6A powerhouse Tualatin, Silverton, which entered the game ranked No. 2 in the Class 5A SBLive media poll, improved to 6-0 in Mid-Willamette play and 7-1 overall, putting the Foxes alone in first place in the conference standings. Silverton can wrap up sole possession of the Mid-Willamette championship with a victory at home against Lebanon next Friday.

“That’s what we strive for every year,” McCarty said of the conference title. “We have bigger goals than that, as well.”

“That means a lot, especially since we lost the league title to them two years ago,” Fessler said. “Yes, that was motivation.”

West Albany, which was the No. 4 team in the Class 5A SBLive media rankings, moved to 5-1 in Mid-Willamette games and 7-1 overall, putting the Bulldogs alone in second place in the conference standings.

“Well, we lost, so it didn’t go great,” said West Albany senior quarterback Michael Cale, who ran for one score and passed for another. “But it was really fun to have that big of a challenge. We haven’t had that big of a challenge all season. They’re a great team to play. Jordan is a great quarterback, and No. 3 (Austin Ratliff) and No. 19 (Fessler) are great receivers, and that was a fun game to play.”

“Oh, this was great. Honestly, I enjoy this kind of toe-to-toe game more than any blowout game,” said junior receiver/defensive back Riley Paxton, who had a huge game on defense for the Bulldogs. “Just the pressure, and the noise from the fans, the environment — I love it.”

Silverton was able to strike first in the showdown. On their first possession, the Foxes moved 39 yards in eight plays, culminating the drive with a 4-yard touchdown run by junior running back Alejandro Briseno. Junior Benjiman Roythorne added the first of his four extra-point kicks, giving the home team a 7-0 lead with 5 minutes and 23 seconds left in the first quarter.

West Albany answered right back. Cale had a 12-yard pass to senior Brock Nelson and an 18-yard run to set up his 1-yard touchdown run, coming on a quarterback sneak. Sophomore Juan Zaragoza-Perez’s extra-point kick tied the score at 7-7 with 2:38 remaining in the opening period.

It didn’t take Silverton long to respond. On the Foxes’ next possession, McCarty connected with Fessler on a 50-yard touchdown pass, giving Silverton a 14-7 lead with 55.9 seconds left in the first quarter.

“That was great. It was the first long bomb for me this season,” Fessler said. “We put me and Austin (Ratliff) on separate sides, and I just ran the post, and he ran the drag, and whoever is open reads the safety. It was a great throw. That felt great.”

Silverton kept rolling from there. A 19-yard run by senior Keegan Walter and a 21-yard scamper by McCarty helped set up Briseno’s second touchdown run, coming from a yard out with 22.5 seconds to go in the second quarter, giving the Foxes a 21-7 lead they would take to halftime.

After a scoreless third quarter, which included a fourth-down interception in the end zone by West Albany senior defensive back Donavyn Weddle, Silverton was looking to put the game away early in the final period.

The Foxes seemed to do just that, as Walter broke through an open hole in the middle of the line and sprinted 63 yards for a touchdown, giving Silverton a 28-7 advantage with 7:29 to play.

But the Foxes’ feeling of relief didn’t last very long.

West Albany senior Jack Moyes returned the ensuing kickoff 76 yards for a touchdown, trimming the deficit to 28-14 with 7:18 remaining.

Soon after, things would get a bit more dramatic.

In the Bulldogs’ next possession, following a fourth-down stop for a turnover on downs, Cale, scrambling to his right on a fourth-and-4 play, found running back Tyler Hart-McNally open in the right side of the end zone, with the freshman jumping straight out toward the back line to make the catch for a 33-yard touchdown, making the score 28-21 with 1:12 left.

Silverton senior Chandler Kuenzi recovered the ball on the West Albany onside kick — but still, there were more dramatics to come.

After three running plays, Silverton, trying to run out the clock, faced fourth-and-less than one at the West Albany 42-yard line, with the Bulldogs out of timeouts. But disaster hit the Foxes as they tried to pick up that final, game-securing yard. There was a fumble following the handoff, with Miller, crashing in, picking up the ball and heading the other way — but McCarty was ready to step up in the clutch.

“I saw the fumble and then just tried to chase him down. I dove at his feet, and just got it done,” McCarty said. “I just wrapped up his legs, a little hog-tie. It was a little bit of panic, but he was close to me, so I just got him.”

“It was great hustle. That’s all I was thinking,” Fessler said. “I knew he was going to get him. Jordan is pretty fast.”

Still, following the turnover, West Albany had the ball at the Silverton 38-yard line with 27.7 seconds on the clock. Cale completed a 15-yard first-down pass to Nelson, who was able to get out of bounds at the 23-yard line. Cale then completed a 4-yard pass to Nelson near the 19-yard line, but the Foxes were able to tackle Nelson inbounds.

Time was quickly running out as the Bulldogs, scrambling as fast as they could, were attempting a clock-stopping spike, but they couldn’t get the play off before the clock hit 0:00 and, soon after, Silverton was celebrating a thrilling, dramatic victory.

“I was pretty pumped for my team. A lot of people played a great game, and we just came together,” McCarty said. “This was super fun. It was good to come out and stay undefeated in league.”

“I was very happy. I don’t know how else to put it,” Fessler said. “I was just glad that time ran out.”

West Albany, despite being disappointed that its furious rally attempt came up just short, was pleased with its effort.

“We lost, obviously, but watching us bounce back in the second half was a great thing,” Paxton said. “Just having faith in my team, always, going into the second half down 21-7, I still had no doubt in my team.”

McCarty completed 14 of 21 pass attempts for 227 yards with a touchdown and an interception. He rushed for 37 yards.

“I was fired up, just playing for my guys,” McCarty said. “We all play for each other, and that’s what’s fun about it.”

Walter led all rushers with 92 yards on seven carries. Briseno had 42 yards on 21 carries, and he had seven receptions for 91 yards.

Fessler had five receptions for 127 yards.

For the Silverton defense, Walter had two sacks. Junior Carlos Recendiz had a sack and another tackle for loss.

For West Albany, Cale completed 13 of 22 pass attempts for 138 yards with one touchdown and no interceptions.

Hart-McNally was the Bulldogs’ top rusher with 21 yards on seven carries. Nelson had four catches for 42 yards. Hart-McNally had two receptions for 33 yards. Sophomore Brysen Kachel had two catches for 20 yards, and Paxton had two grabs for 13 yards.

Paxton had a tremendous game on defense, with a sack and four other tackles for loss.

“Coach (Cole) Pouliot, our defensive coordinator, had a great plan for us,” Paxton said. “That plan got me to places where no one could get to me, so I could make plays, so that’s what I credit that to. I think our defense did a great job allowing me to get those tackles.”

Also for the West Albany defense, senior Dakota Monson, senior Autzen Perkins and senior Bryce Bowers each had a sack. Weddle had an interception. Miller had two tackles for loss to go with his fumble recovery. Junior Noah Reese and senior Chase Barnes each had a tackle for loss.

The Bulldogs are now looking to benefit from the hard-fought setback.

“For sure, playing that good of a team is going to make you better, no matter what,” Cale said. “That was a great game, and I’m excited for Monday’s practice.”

“Come playoffs, it seems to always work out that we run into them again, so we’re just going to do our best to prepare and take it week-by-week,” Paxton said. “We’ve got Corvallis next week, and obviously that comes first. We’re going to finish our season up right and hopefully get better. And, hopefully, we’ll see these guys again down the road.”

Silverton is also gearing up for postseason play.

“We just want to keep it going just like this,” Fessler said. “I’m looking forward to it a lot.”