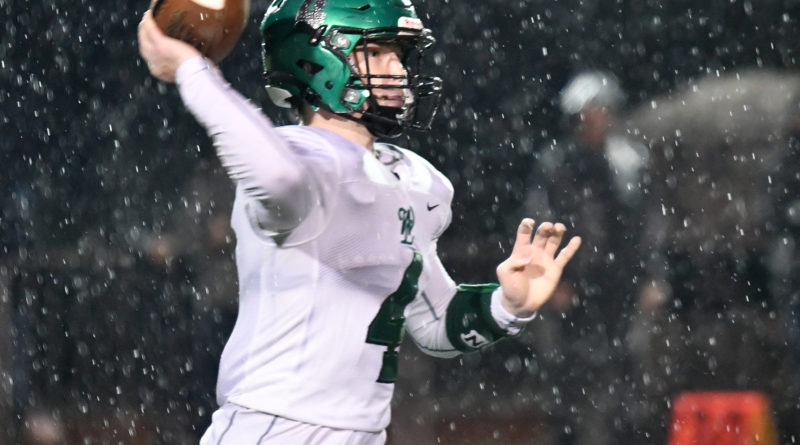 Much has changed since that night — not the least of which is Ingle having taken over behind center, the third starter the Lions have used at quarterback this season.

Ingle took over from Sakys during last week’s victory over Tigard and started Thursday night when the No. 4 Lions traveled to face top-ranked Lake Oswego. He was efficient running the offense and led a West Linn defense that blanked the high-powered Lakers in the second half, leading the Lions to a 31-14 victory.

“I’m just so thankful that I was able to get the opportunity,” said Ingle, who was 5 of 9 for 100 yards and a touchdown, ran for another score, and had a game-high eight tackles. “We’re all fighting for spots. We have so many guys. We’re all just backing each other up.”

While nothing is assured going forward, it appears the Lions (7-1, 3-1 Three Rivers) have settled on their quarterback entering the homestretch of the season.

“I mean, no shame towards (Chase) Harmon. He got it done. Sakys got it done,” Lions junior Mark Hamper said. “But, you know, I feel like Earl’s the one. Earl is just a true winner. That kid, he’s a monster, a true football player. You can put him anywhere on the field and he’d succeed. I just love him to death.”

The Lions’ victory jumbles the Three Rivers League title race heading to the final week of the regular season. They handed the Lakers (7-1, 3-1) their first loss, and with Tualatin’s 47-8 victory over Oregon City, there’s a three-way tie atop the standings with only rivalry week left.

West Linn takes on Oregon City in the Battle for the Bridge, while Lake Oswego travels to Lakeridge and Tualatin faces Tigard. While the Lions might find it difficult to root for the Pacers and Tigers, if the cards fall right and those two teams win at home, a West Linn victory would give the Lions the league title outright.

“I didn’t think about that, but we definitely still have a chance,” said sophomore linebacker Ben Winjum, who had seven tackles. “If we have whole weeks of practice like we did this week and we show up like we did today, we’ll take care of business the rest of the year.”

This turn of events didn’t look possible three weeks ago, when the Lions got blown off their temporary home field at Wilsonville by Tualatin.

Ingle called that defeat “a gut check” that forced the Lions to concentrate on exploiting their strengths — a defense that came up with big stops against Lakeridge and Lake Oswego, and a talented, senior-laden offensive line that powered a run game that amassed 225 yards Thursday.

“When you get your butt kicked 49-14, it’s quite a confidence loss, you know?” Hamper said. “We’ve been waiting for this one to come show that we’re the top team in the state.”

Just as the Lions have righted the ship since the Tualatin loss, the Lakers consoled themselves in knowing they have time to recover from the sting of this defeat.

“It was good that it came now and not during the playoffs,” said senior Gabe Olvera, who ran for a game-high 114 yards. “We’ll definitely learn from this and push ourselves harder during practice and just aim for as far as we can go.”

Olvera said one important lesson to take from the game is to not let adverse moments affect them as much as they did Thursday.

“There were big plays that happened and we got down on ourselves,” Olvera said. “Next time, we just need to fight through and go on to the next play. We need to keep fighting and always try our best through every obstacle we face.”

The Lakers grabbed a 14-7 lead midway through the second quarter when Olvera went up high to haul in a pass by Dylan Layne around the 20, bounced off a defender and streaked to the end zone for a 53-yard score.

Those were the last points they scored. For an offense that entered Thursday scoring just a tick over 42 points per game, that seemed unfathomable, but Winjum said it came down to “seeing what they were doing in the first half and just matching their intensity a little bit better in the second half.”

Ingle pointed to the opening drive of the second half, when the Lakers marched from their 20 to the West Linn 21, facing third-and-1 and looking poised to break a 14-14 deadlock.

Hamper knifed through on third down to lead a charge that dropped Olvera for a 1-yard loss. On fourth down, it was sophomore linebacker Ryan Vandenbrink who came up big, stuffing Calvin Macy for no gain.

The Lions answered with a quick drive, as Jaxon Steinhauer burst for a 23-yard run and Ingle hit Gus Donnerberg for a 39-yard pass, setting up Gage Hurych’s 21-yard field goal with 3:06 left in the third.

“It was a huge momentum swing,” Ingle said. “To get that stop just pumped all the guys up. It was definitely a huge moment.”

After forcing a Lake Oswego punt, the Lions struck quickly again. Ingle hit Wiley Donnerberg for a 22-yard gain, and a pass interference penalty wiped out a third-down stop, leading to Hamper scampering to the end zone from 12 yards for a 24-14 lead with 9:36 to play.

Hamper had one last big play in him, stepping in front of Layne’s pass over the middle deep in Lions territory and returning it 55 yards before running out of gas and decelerating out of bounds in front of his jubilant bench at the Lake Oswego 39.

“I knew that Olvera was going to run a seam,” Hamper said. “Jack had been eying me all game, waiting for me to bite on his brother (Dylan). So, I bit a little, saw he was throwing there and jumped it.”

Layne, who entered the game leading Class 6A in passing with 1,945 yards and completing 74.6 percent of his passes, struggled in the wet conditions. He finished 11 of 21 for 173 yards with two touchdowns.

Steinhauer, who sat out the Lakeridge game with an ankle injury, had his second 100-yard rushing game of the season, with his 19-yard touchdown with 3:21 to play capping a career-high 111-yard night.

“This win is absolutely huge,” Winjum said. “We’ve had this game marked on our calendars for a while. We just played great. Our defense really stood up strong. It was just a great win.”