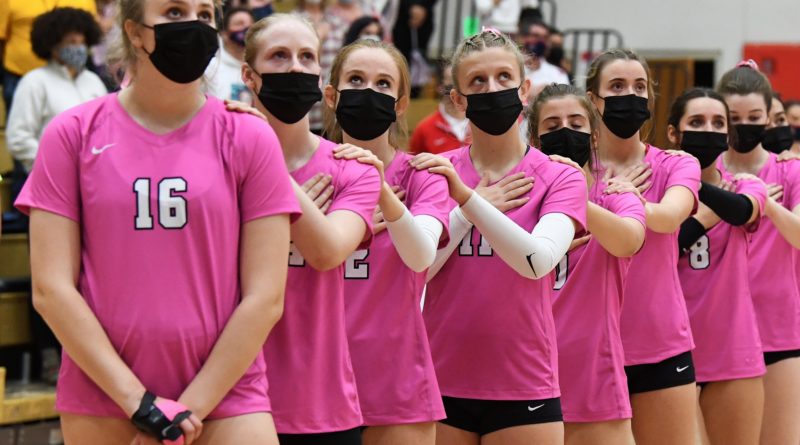 Tess Masingale has gone from fresh-faced freshman to grizzled veteran during her four seasons with the latest iteration of a Jesuit volleyball dynasty that has endured for more than two decades.

Since making their first appearance in a state championship match in 1999, the Crusaders have reached the final 12 times, winning seven titles — including the past two contested before the pandemic. They’ve made the tournament every year since, failing to bring home hardware only once.

Masingale starred for the JV team when the Crusaders (22-2, 11-0) bounced back from that 2017 season, in which they failed to trophy at state, to win the school’s sixth championship. She then joined older sister Ella on the 2019 team that held off Central Catholic in five thrilling sets to repeat, making the all-tournament first team that year.

She understands what it means to uphold the tradition that is Jesuit volleyball.

“There is definitely a lot of pressure,” said Masingale, who notched five of her match-high 14 kills during a closing run that saw Jesuit erase a 20-17 deficit in the final set. “We try not to let it affect us too much. It’s a lot of pressure, and I think our team is doing pretty well with it.

“Handling pressure is something that’s kind of like a skill, and I think we’re getting better at it as the season goes on.”

A program that has sustained success as long as Jesuit has develops plenty of traditions that connect the past with the present.

Those traditions foster an environment “that really pulls the team together,” Masingale said. “It really makes a difference playing next to someone that you enjoy being with and playing next to. You’re playing on the court with some of your best friends.”

Crusaders coach Teresa Zimmerlee, who has led the program since its inception in 1993 when the Southwest Portland Catholic school went co-ed, lauded the work the six seniors on the roster — including Masingale (a Cal Poly San Luis Obispo commit), defensive specialist/setter Hannah Nguyen (the only player who saw action for both the 2018 and 2019 title-winners and who is headed to Harvard next fall) and Maisie Alexander (a second-team all-tournament pick as a sophomore) — have done “bringing along the younger kids. They’re very positive and supportive of them, and I think that really helps.”

One of those youngsters is freshman setter Jackie Carle, who a year ago was at St. Thomas More, whose CYO season was wiped out by the pandemic. The Athena Volleyball club product started the season splitting time at setter with Nguyen, but she quickly seized the full-time job, which came as no surprise to Zimmerlee.

“Her personality lends itself to being a very aggressive player,” said Zimmerlee, who likened Carle to all-state setter Alison Buchholz, who graduated in June. “Jackie doesn’t worry about making mistakes, and she’s getting better and better about getting a quicker ball to the hitters.”

Carle acknowledged being overwhelmed at first “because I’ve never set so many different things and different people,” with a wealth of options at her disposal — Masingale and sophomore Lily Lansing in the middle, juniors Izzy Patterson and Ceanna O’Loughlin to her left, and junior Avery Packard to her right.

Her teammates have taken the freshman under their wing, however, and made the learning curve less steep.

“There’s definitely some pressure, but my teammates are really good about helping me,” said Carle, who had 33 assists Tuesday night. “They all know that I’m this freshman coming into this, and they have helped lift me up. It’s really nice to have them all there for me.”

Masingale can appreciate how intimidating it is to be a newbie taking over from two setters who are now playing in college — Buchholz (Washington and Lee) and Peyton Griffin (Cal State East Bay) — and joining a championship-level program while learning on the fly.

“It was kind of unexpected, but she’s doing an amazing job, especially as a freshman,” Masingale said. “She’s doing a really good job with the pressure. That’s kind of a hard thing to do, especially being a freshman, but we’ve been working hard in practice with the setter-hitter combinations, and I think it’ll continue to progress into the state tournament.”

Ah, yes, the state tournament. It’s almost a given that Jesuit will make it back to Liberty High School in 2½ weeks, considering it last missed qualifying for the final site in 1997.

The Crusaders hoped last fall to become the first team to win three consecutive Class 6A titles since Central Catholic from 2009-11, but the pandemic spoiled those plans. Instead, they settled for going 14-0, dropping only four sets and winning the culminating-week tournament with a 3-0 victory over West Linn.

“It was kind of the state tournament, but not quite the same,” Masingale said. “So, it was kind of a three-peat, but you can’t really call it that.”

Their quest for an actual three-peat this season has hit only one speed bump — that same West Linn team, which clinched the Three Rivers title last week, has defeated the Crusaders twice this month, at the Clearwater Classic in Bend and in last weekend’s West Linn Tournament final.

Tuesday’s victory was Jesuit’s first match since that two-set loss, and Zimmerlee already saw an improvement in defense and serve receive that will be critical in the postseason.

“There’s a few things that we’re changing up,” she said. “Our defense was pretty stellar tonight, and our serve receive was really good. When we play our game, I think we can play with anyone.”

If a third West Linn-Jesuit meeting is to take place, it would be in the semifinals or final at Liberty, depending on how the final rankings shake out when they freeze this weekend before the 32-team field is set.

Jesuit and West Linn (22-2) also will have to contend with the likes of Central Catholic (19-2), which has cruised to another Mt. Hood title, Mountain Valley champion Bend (19-2) and Southwest champion Sheldon (19-7), among others.

“We’re hoping to see them again,” Masingale said of a rematch with the Lions. “We just need to make less mistakes on our side of the net and control what’s happening on our side rather than look across from it. That’s going to be the most important thing for us during the state tournament — relying on our teammates and staying positive.”