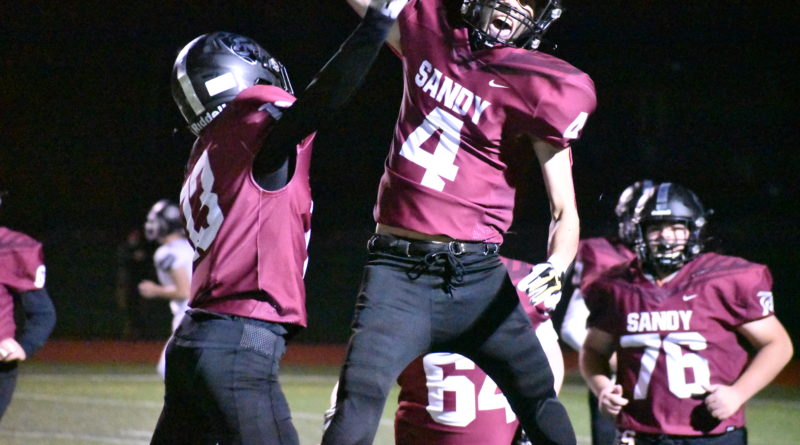 The Sandy football team is putting together a historic season, and when it comes to a close this pack of Pioneers wants to be number three.

“Only two teams have won a playoff game in school history — we want to be team number three,” Sandy coach Josh Dill said.

It has been more than 20 years since Sandy’s last playoff win, which came in the final season of Don McCarty’s seven-year run from 1993-99.

Dill took over at Sandy late in the summer of 2019. The team went 3-6 his first season. The Pioneers followed with a 1-3 record during the abbreviated COVID spring season with a schedule that had them taking on 6A powers Sunset, Central Catholic and Clackamas.

“We knew something special was happening last spring when we went up against some top-10 teams,” senior captain Ethan Lucore said. “We put in so much work during the offseason — we were together pretty much every day.”

“It was a great opportunity for us all, freshmen to seniors, to all mingle together,” added co-captain Robert Burns. “I guess you could say we are homegrown out here.”

Behind the scenes, the Pioneers were bonding between a steady flow of offseason workouts and trips to area high schools for 7-on-7 games.

“In a lot of ways this feels like my first season here,” Dill said. “We’ve been able to lay down a foundation for why we do what we do, and our seniors have been here and bought in. These are the best leaders I’ve ever had.”

That buy-in relates to Dill’s F.A.C.E. of the Program mantra that focuses on Family, Accountability, Citizenship and Earn It.

“We talk about those things all of the time,” Dill said. “We spend a lot of time together and have built a culture of joy and love. It’s a positive environment, and the kids are responding to that.”

That positive culture is boosting the team’s turnout — a key for the smallest public school in the Mt. Hood Conference.

“We run a smoke-and-mirrors offense with a lot of counters and jet sweeps out of some tight formations,” Dill said. “We share the ball. You might be able to take a guy or two out, but you are not going to take us all out.”

Sandy highlighted its early-season run with a 14-7 home win over Barlow, snapping a 21-year losing streak to the Bruins.

Clemmer’s favorite play of the night was a much simpler one.

“We went into victory formation, I took a knee, and we rushed off the field,” he said. “That win proved to ourselves that we can play.”

“That week in practice, everyone was laser focused,” Lucore said. “That game meant something to everyone here, to our parents and to the whole town.”

The Pioneers hit a midseason hiccup with a 41-0 loss to reigning state champion Central Catholic, which has spent the season toward the top of Oregon’s 6A media poll.

“We are at 6-1, and we’ve taken some huge steps in the right direction,” Dill said. “But we aren’t there yet; we still have some work to do. Contending with those top teams is that next step.”

The Pioneers have rebounded from that setback with another three-game win streak that included Friday’s 46-14 home win over newcomer Nelson.

Sandy took quick command of the game by going ahead 18-0 early in the second quarter after freshman Ethan Lamphere returned an interception 17 yards for a touchdown. The Pioneers grew the lead to 32-7 when Hayden Thomas returned a fumble 23 yards for a score on the first play of the second half.

“We all play selflessly and as a family,” Clemmer said. “We are playing for each other. Our chemistry is so good.”