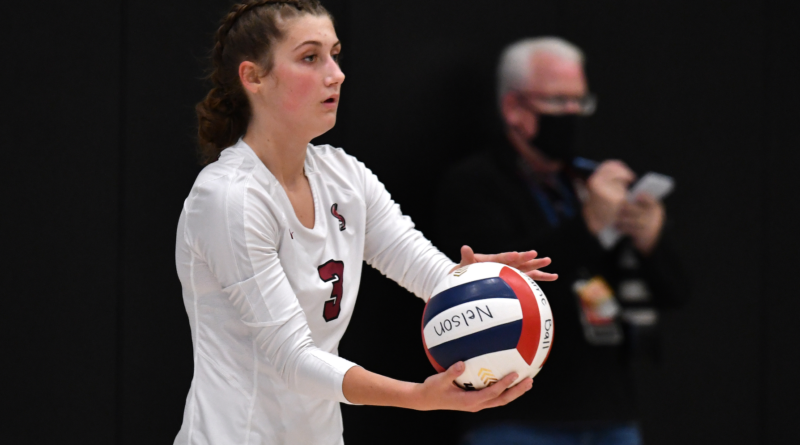 Over the next week, we’ll be taking a position-by-position look at some of the top players in Oregon high school volleyball. Our second list focuses on the liberos and defensive specialists. (Setters)

There are hundreds of standout volleyball players in Oregon and these lists are not intended to be comprehensive! Let us know about any other liberos/defensive specialists you think should be added.

Alexander has been one of the state’s top liberos each of the past three seasons. As of midseason, the AVCA preseason All-American led the Crusaders in digs with 96 (2.9 per set) and aces with 19 (.922 serving percentage). “Maisie has superb court awareness and reads the attackers very well,” Jesuit coach Teresa Zimmerlee said. “She is our back row phenom, and we count on her precision passing to run our offense.”

Hawks coach Lisa McBee called Bergers “a glue player” who excels in tight matches. She had more than 125 digs, 21 aces and 25 assists through the first month of the season. “Avery is dynamic and fun to watch,” McBee said. “She is cool under pressure and can find the hitter around the block.”

Brawley, a first-team all-state selection during the spring, never ceases to surprise Crusaders coach Melissa Holman. “She is all over the floor, picking up balls you never thought could be saved and destroying her jersey a little more with every dive and sprawl,” Holman said. “Whenever I check with her after she’s taken a brutal dive, I ask, ‘Hey, AB, are you OK?’ and she replied with a big smile, ‘I’m great, Coach!’ She is a true leader with more grit than any athlete I’ve ever worked with.”

Bruegman looked like she might become the Irish’s next great hitter with her performance on the JV team as a freshman, but she moved to libero when she joined the varsity in the spring and has thrived in the role. “Elle is the first to volunteer for anything,” Sheldon coach Martine Wodke said. “She works hard and competes to do her best. She understands the game and supports her teammates.”

Chan grew up in Germany and is fluent in German. She moved back to the United States a couple of years ago and since joining the Mavericks program has become a leader at an early age. She had a team-high 184 digs (4.5 per set), 21 assists and 10 aces with a 2.49 serve receive rating through the first month of the season.

Ewell has played a significant role in the Honkers sitting near the top of the Class 2A Southern Cascade League. She has 269 digs in 16 matches and leads the team in quality passing rating. “Tayla has incredible court awareness and ability to read the defense to be in the right place at the right time most of the time,” Lakeview coach Anneke Griffith said.

Fraser leads the Guardians in digs (289) and aces (89 with a .928 serving percentage) in helping them to a 17-5 record and a share of the PIL lead with two matches remaining. “Avery has been playing lights out,” Wells coach Mark Mendak said. “Her attitude, leadership and focus have been an engine for the team this season.”

Hellem is new to being a libero this season but has taken to the position like a shark to the ocean — not that she’d know, since she’s terrified of them and won’t go into the ocean for fear of encountering one. She has a team-high 163 digs (10.9 per match, 4.3 per set) and is serving at a .934 clip. “She has an energy that is unmatched from any other player I have seen so far,” said Bulldogs coach Megan Wallace. “You can feel her energy while you watch her play. She brings a level of intensity and excitement that helps drive our team forward and stay focused.”

Keightley played alongside all-league libero Abby Bareksten the previous two seasons, earning second-team all-Three Rivers recognition as a defensive specialist in the spring. She dons the libero jersey this fall and is ranked as the No. 6 prospect in the Class of 2023 by PrepDig Oregon. “Samantha is the heart of our defense in the back row,” Pioneers coach Erica Frafjord said. “She’s a solid passer and defender who leads our defensive strategy with her great reads.”

King was an all-Cowapa selection during the spring and has committed to Trinity University in San Antonio, Texas.

Lee has made the all-PIL team twice during her career, receiving honorable mention as a sophomore and making the first team in the spring. Mountain Lions coach Kyla Henry credited Lee as one of the players who “keeps the team going with their leadership on and off the court.”

Paterson has been a defensive leader for the Raiders this season, leading the team with 126 digs (4.1 per set) and serving 94.1 percent with 10 aces.

Rewers has worked on her game to become a reliable back-row presence for the Valiants, someone coach Becky Kemper feels comfortable using anywhere on the court. “She is such a smart player and knows the game very well,” Kemper said. “She is consistent on both serve receive and defense and is also a very tough server.”

Rietdyk became the Vikings’ starting libero during the spring season after playing defensive specialist as a freshman. She made the all-Skyline first team and the all-defensive team as a sophomore, when she had 137 digs (2.03 passing average) and 15 aces. She also is a Level 6 gymnast who drives 140 miles round-trip to train with her club, Southern Oregon Gymnastics Academy in Medford. Mazama coach John Downey called her “a competitor who watches her film and is constantly seeking ways to improve her skills. Her exponential growth rate is a result of this dedication.”

Rockwell is like a metronome on the back row, making perfect passes over and over again, said Banks coach Stephanie Wahne. “She is able to move past things and stay positive while focusing on what needs to be done,” Wahne said. “She wants to be coached. She is constantly hungry for feedback on how to improve, and her eagerness to better her skills is the personality a coach dreams of.”

Sangermano was a second-team Class 4A all-state selection in the spring and made the all-Sky-Em first team, tallying 263 digs and 82 assists. “One of the best passers and defensive players I’ve had the pleasure to coach,” said Tigers coach Gary Meininger.

Starley has played every position for the Pioneers over the course of her career, and coach Alyssa Perreira described her as “the epitome of a team player. She is selfless, has heart, and is a competitor to the max. She impresses us every day with her will to step in wherever the team needs it most.”

Street transferred over the summer from crosstown rival Corvallis and “has been making a huge impact in the back row,” said Raiders coach Troy Shorey. “She has a never-give-up attitude and believes that she can touch every ball.” Her 68 digs rank second on the team to senior Kara Peterson.

Szczesniak teams with libero Avery Bergers to form a solid back line for the first-year Hawks. Coach Lisa McBee said Szczesniak’s modest stats (30 digs, .970 serving percentage) belie the “incredible saves” she makes seemingly every match. “Zoe is here, there, everywhere,” McBee said. “She reads, anticipates and makes quick adjustments that help her read the game fast. She will do whatever it takes to keep the ball off the ground.”

Tashima has also hit from the outside this season, but her specialty is as a steady back-row presence who “has taken on this role with tenacity and an eagerness to learn,” Aardvarks coach Nikole Weir said. “She is a level-headed athlete who consistently plays calm and relaxed under high-pressure situations.” Tashima plans to attend college in Japan.

Taylor transferred from Central Catholic over the summer and has allowed the Falcons not to miss a beat defensively after the graduation of all-league libero Maggie Rasch. “Mal brings an intensity to the court in her current role,” La Salle Prep coach Anna Dillard said.

Cheung is a three-year varsity player for the Wildcats who has helped them vault into second place in the Metro League standings this fall. She averages a team-high 15 digs per match, and Westview coach Janelle Brandt calls her “the heart and soul of our back row, a very strong server and one of the best liberos in the state.”