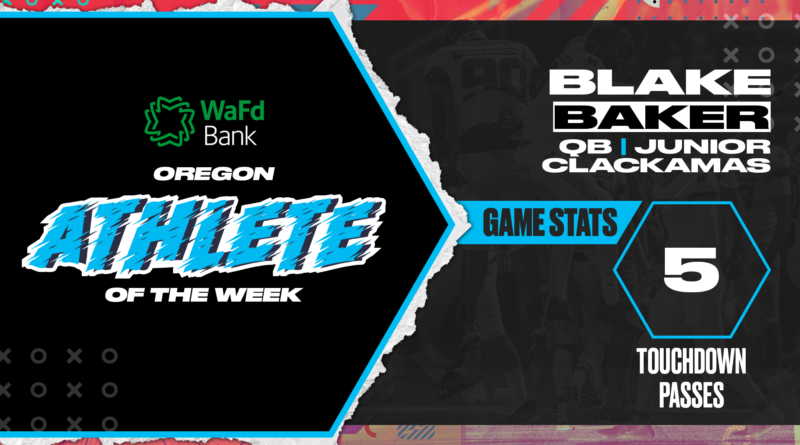 The junior fired a season-high five touchdown passes in the Cavaliers’ 48-14 win over Grant.

Baker received 37.41% of the vote, beating out Mazama’s Kaylea Rietdyk who finished second with 23%. Canby’s Tyler Konold finished third with 14.19% and Ridgeview’s Eric Pendergrass finished fourth with 10.36%. There were over 24,000 votes tallied this week!

Kaleb Bartel, Seaside football: Bartel kicked a 37-yard field goal in the fourth quarter to lift the Seagulls to a 16-14 win over Milwaukie.

Ryles Buckley, Hood River Valley football: Buckley scored three touchdowns — rushing, receiving and on an interception return — as part of the Eagles’ 54-6 victory over The Dalles.

Lonnie Burt, Jesuit football: Burt, who entered the game with 29 yards rushing this season, gained 90 yards with three touchdowns, giving the Crusaders a boost en route to their 49-13 win over Beaverton.

Darrius Clemons, Westview football: Clemons returned the opening kickoff for a touchdown, and after the defense forced a punt, Clemons returned it for another touchdown. He scored for a third time, on a one-yard pass from Sam Leavitt, in the second quarter, sending the Wildcats on their way to a 35-0 win over Southridge.

James Crabtree, Sherwood boys cross country: Crabtree won at the Nike Hole in the Wall Invitational in Lakewood, Wash., in a course-record time of 14:45.5.

Hiro Diamond, Liberty football: Diamond passed to Mike Campos for a touchdown on the final play and then ran in the two-point conversion to carry the Falcons to a 50-49 win over Newberg. Diamond accumulated 469 yards of total offense and factored in seven touchdowns (four passing, three rushing).

Avirey Durdahl, Nelson football: Durdahl had four touchdown passes as the Hawks won their second in a row, this one a 28-7 victory over Reynolds. Durdahl, a 6-foot freshman, has passed for seven touchdowns in the past two games.

Chloe Foerster, Jesuit girls cross country: Foerster finished in first place at the Nike Hole in the Wall Invitational in Lakewood, Wash., with a time of 17:01.1, winning by 12 seconds.

Ashton Foster, Dallas football: Foster had three rushing touchdowns and completed 6 of 9 passes for 93 yards in the Dragons’ 27-10 homecoming win over Crescent Valley. He also was on the homecoming court.

Imarion Kelly, Roosevelt football: Kelly ran for one touchdown and passed for two, including a 30-yard go-ahead score with less than two minutes left as the Roughriders notched a big 28-22 win over rival Jefferson. (STORY)

Caden Lasater, Crater football: Lasater ran for a touchdown in overtime and forced a fumble on the Eagles’ possession in Crater’s 17-10 win over Eagle Point.

Kyle Liscom, Pendleton football: Liscom (nine carries, 126 yards) scored three touchdowns and was a massive presence on defense in the Buckaroos’ 48-0 rout of McDaniel. He had one sack and three tackles for loss while being in on 11 tackles. (PHOTOS)

Brody MacMillan, La Grande football: MacMillan rushed 16 times for 161 yards and three touchdowns to lead the Tigers to a 55-16 win over Nyssa.

Calvin Macy, Lake Oswego football: Macy rushed 15 times for 101 yards, including the game-sealing 15-yard touchdown late in the fourth quarter, as the Lakers knocked off top-ranked Tualatin with a 35-26 road win. (STORY)

Tyler Mahlman, Century football: Mahlman passed for 387 yards and five touchdowns, leading the Jaguars to a 43-24 win over Glencoe. (STORY)

Jordan McCarty, Silverton football: McCarty factored in all seven of the Foxes’ touchdowns, passing for five and running for two, in a 47-7 rout of Central. His five touchdown passes broke his career high of three (set in 2019 and matched in his junior season), and his two touchdown runs matched his career high. His seven total touchdowns are a career high.

Luke McNabb, Scappoose football: McNabb passed for three touchdowns and ran for three to power Scappoose to a 47-13 victory against McKay.

Cayden Palmeri, Century football: Palmeri made a game-high nine tackles and intercepted two passes on his birthday, helping the Jaguars earn a 43-24 victory over Glencoe. (STORY)

Eric Pendergrass, Ridgeview football: Pendergrass rushed for three touchdowns in the Ravens’ 30-0 shutout of Parkrose. Pendergrass has at least one touchdown in each game this season and has a total of 11. (PHOTOS)

Logan Person, Dallas football: Person rushed for more than 100 yards with a touchdown in the Dragons’ 27-10 homecoming win over Crescent Valley. On defense, he had 11 tackles and three pass breakups. He also was on the homecoming court.

Austin Rapp, McMinnville football: Rapp carried 25 times for 136 yards, his second consecutive 100-yard game, in the Grizzlies’ loss to Sherwood. He scored two touchdowns — one rushing and one receiving.

Austin Ratliff, Silverton football: Ratliff had seven catches for 185 yards and two touchdowns in the Foxes’ 47-7 win over Central. He set a season high in receiving yards and matched his season high in touchdown catches.

Jermaine Richards, Willamette football: Richards had two of the Wolverines’ five interceptions, returning one for a touchdown, in their 20-14 victory against Ashland.

Kaylea Rietdyk, Mazama volleyball: The junior libero helped the Vikings sweep Hidden Valley and North Valley to improve to 15-0. For the week, she had 13 aces, a 94.8 serving average, 17 digs, a 2.79 passing average, one kill and a .250 hitting percentage. She has 28 aces and 187 digs this season.

Nick Sakys, West Linn football: In his first start, the sophomore led the Lions to a thrilling 28-27 victory over Lakeridge. He finished 18 of 25 for 173 yards and two touchdowns, including a nine-yard touchdown pass to Gus Donnerberg with 22.6 seconds remaining. (STORY)

Tomás Veliz, Woodburn football: Veliz made two interceptions that led to touchdowns, ran for one touchdown and caught a pass for another for the Bulldogs in their 44-7 rout of Newport.

Andrew Walker, South Medford football: Walker broke a school record with a 95-yard interception return for a touchdown in the Panthers’ 31-19 victory against Grants Pass.

Sayre Williamson, Mountain View football: Williamson totaled 222 yards on the ground and wound up in the end zone on four of his 11 carries, helping the Cougars cruise past Aloha for a 63-0 win.

John Wolfe, Vale football: Wolfe caught six passes for 128 yards and two touchdowns and returned a kickoff 95 yards for another touchdown, powering the Vikings to a 34-13 win over Baker.

Juan Zaragoza, West Albany football: Zaragoza was 3 for 3 on field goal attempts in the Bulldogs’ 21-7 win over Lebanon.