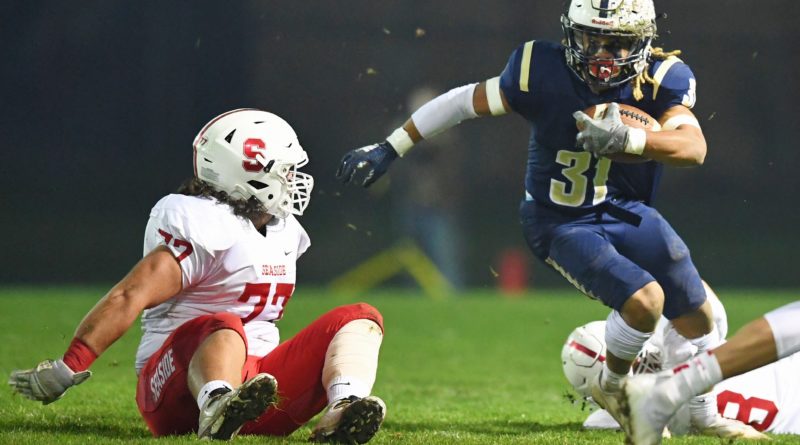 Five weeks ago, when Banks traveled to Estacada and got trampled by the Rangers’ veer offense in a 33-7 defeat, the Braves fell off some radars as a Class 4A title contender.

It turns out that suits the Braves just fine.

“I think this team is exactly where they should be,” senior Charlie White said after his team’s 38-0 home victory Friday over Seaside put Banks in the driver’s seat for the Cowapa League title.

“We’re getting a lot better each week, and we have the potential to be one of the best teams in 4A, but we’re not quite there yet. We’re still working on putting the pieces together, figuring out who’s going to be our guys, so I like where we’re ranked. It doesn’t give us overconfidence, but we’re still confident going into each week.”

The Braves (6-1, 3-0 Cowapa) showed they’d learned some lessons from that Week 2 loss, when the Rangers rolled up 378 yards on the ground with a punishing veer attack that took advantage of what Banks coach Cole Linehan said was a lack of discipline from his defense.

Facing a Seagulls wing-T attack that averaged 245 rushing yards per game, the Braves stuck to their assignments and held Seaside to 90 yards on the ground — 74 coming on the game’s final series against a mix of first- and second-string defenders — and 113 yards of total offense.

“We knew if our linebackers played well, we’d be able to put it together,” said White, who had three tackles for loss and a sack. “Tonight, we were filling holes and knowing where the pressure was coming from rather than getting washed. Our line got better penetration, which slowed them up and allowed our backers to make plays.”

That was especially true late in the first half when the Seagulls (4-2, 2-1) had a chance to get back into a game they trailed 17-0.

Cooper Rogien blocked a punt and recovered the ball at the Banks 20. A 14-yard pass from Carson Kawasoe to Tanner Kraushaar gave Seaside first-and-goal at the 2. A bad handoff on first down cost the Seagulls six yards, followed by White getting a sack by forcing Kawasoe to slip on the muddy turf. The possession ended with a fourth-down interception by Christian Lyda just before halftime.

The Seagulls threatened once more early in the third, with a 27-yard rumble by senior fullback Lawson Talamantez getting them inside the Banks 15. White came up big on third down, tackling Talamantez for a 2-yard loss, and an overthrow on fourth down gave the ball back to the Braves.

Cooper Gobel’s 48-yard pass to Jack Lyda got Banks out of trouble, and seven plays later, Gobel connected with White on a 9-yard touchdown to push the lead to 24-0 with 4:09 left in the quarter.

“We were able to get some turnovers tonight that we haven’t been able to do the last couple of weeks,” Linehan said. “Our offense is so explosive, we just need to get them the ball, so it was nice to see us actually get the ball back for them.”

The Seagulls tried to counter Banks’ explosiveness by sending blitzers on almost every down, and while they made a few big plays, the Braves also were able to burn them when their protection held.

“We knew Seaside was going to come hot,” said Gobel, who was 10 of 18 for 179 yards and two touchdowns. “They just threw guys at us, but there’s not a lot of defenses you can use to stop our offense.”

Friday’s game was the first of three over the final three weeks of the season that figure to decide the Cowapa title. The Seagulls dropped this one, but they still have a big game against Tillamook (3-0 in league play) next week before finishing with their rivalry game against Astoria.

They’ll go into the Tillamook game with the status of two key players unknown. Senior running back Kaleb Bartel went out on Seaside’s opening series with a knee injury and didn’t return, costing the Seagulls their most dynamic player in the backfield.

Rogien was disqualified midway through the fourth quarter and would miss next week’s game if his appeal of a one-game suspension is denied.

Still, coach Aaron Tanabe was quick to remind his players after the game that “all of our goals are still in front of us,” and that a win in either of their final two games would secure one of the league’s three Class 4A playoff berths.

“This game was huge,” he said. “But sometimes, we get so caught up in winning a league title and all these other things, and we’ve got to remind ourselves, football is fun. So, we just need to go back to basics and focus on doing our jobs and having fun.”

The Braves will enjoy a stretch of home games after playing three of their first four on the road. They started a four-game homestand by beating Amity in a hastily arranged game after Valley Catholic forfeited due to injuries decimating the roster, and after Milwaukie next week, they’ll play host to Tillamook in a de facto league championship game.

“Our field was so trashed from the pandemic that we were road warriors there for the last two years,” Linehan said. “We’ve missed this place. It was nice to come home and get to play on this field.”

It’s looking more likely that they’ll get a fifth consecutive home game to open the 4A playoffs, and while the Braves know there’s still plenty of work ahead, they like their chances.

“I feel very comfortable with the team I have around me,” Gobel said. “I feel like there’s not a lot of losing ahead of us, and I think we’re going to make a deep run in the playoffs. I think we’re very underrated, but Marshfield, Cascade, those teams deserve the hype they’re getting, but we’ll see them sooner or later, and we’ll show them what we’re about.”