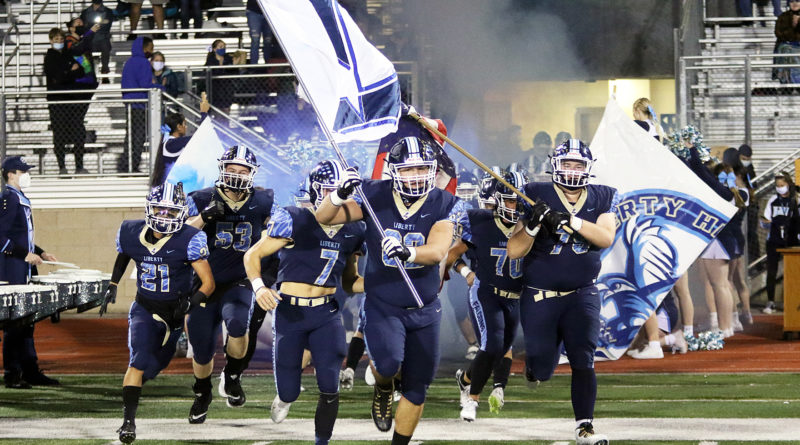 But, still, the Liberty football team is anything but satisfied — even with the imposing numbers.

The Falcons, playing the role of perfectionists, are still looking to get better, despite rolling up 558 yards of total offense in their 52-34 win over McMinnville in a Pacific Conference game played Friday in front of a homecoming crowd at Liberty High School in Hillsboro.

“After playing through that game, there were definitely a few ups and downs,” said senior quarterback Hiro Diamond, who accounted for five touchdowns in the victory. “There were parts where we were playing the best we could, and parts where we were kind of slowing down. But overall, I think it was pretty good.”

“It was pretty good. It was a little rough at the end,” said Liberty senior Ethan Jones, who had four touchdown receptions. “We didn’t do too good on the defensive side of the ball, not as good as we hoped. But in the end, we pulled through and got the win. It definitely was a learning game, especially on defense.”

The Falcons know they have to keep upping their game if they’re going to reach one of their goals — winning the Pacific Conference championship.

With the wild win over McMinnville, Liberty improved to 3-0 in conference play (5-2 overall), putting the Falcons in a tie with Sherwood for first place in the standings, with each team having two conference games left.

“It means a lot,” Jones said of the 3-0 start to Pacific play. “I want to win the league title. That’s what I want. All the seniors got together and said that’s what we wanted. We’re going to win league this year. It’s going to take effort. We need to come together on defense and pull it together.”

“Obviously, being 3-0, we have the league championship in mind,” Diamond said. “But right now, we’re just looking at the next game ahead of us, which is Century.”

McMinnville, which had some impressive offensive numbers of its own in Friday’s contest, moved to 1-2 in conference games (3-4 overall), putting the Grizzlies in a tie with Century and Newberg for third place.

“We could have played better, but I think we played hard,” said junior running back Austin Rapp, who had three long touchdown runs for the Grizzlies. “We kept battling and kept driving the ball, but it was just some little mistakes that we made. That just kind of killed us.”

“That’s been the main thing for us this year. Our offense has been dominating,” Jones said. “I think we have the best offense in the league. It’s because of my quarterback and my offensive line — everyone on the offense. Our offensive line (including senior George Lyman, junior Ryan Berger, junior Elijah Markowitz, senior Isaac Bland and senior Liam Mulvey, among others) is one of the best lines I’ve ever played behind.”

Another big reason for the potent Liberty offensive attack seems to be the connection between Diamond and Jones. Against McMinnville, they teamed up for seven pass completions for 161 yards and three touchdowns.

“I’d say he’s my closest friend,” Diamond said of Jones. “We’ve known each other for more than a decade. It comes down to the off-field chemistry, and it translates for us onto the field.”

“We’ve been playing together since third grade,” said Jones, who also had a touchdown catch on a halfback pass from Keenan Frye. “We’ve been best friends all throughout that.”

Despite all of Liberty’s offensive exploits, it was McMinnville — and Rapp — who had the first big play of the game.

On the Grizzlies’ third play from scrimmage, Rapp broke free for a 42-yard touchdown run, giving the visitors a 7-0 lead with 9 minutes and 13 seconds left in the first quarter.

It didn’t take the Liberty offense long to kick into high gear after that.

On the Falcons’ ensuing possession, Diamond connected with Jones on a 42-yard touchdown pass down the left sideline, tying the score at 7-7 with 7:54 remaining in the opening period.

Liberty soon struck again. A 14-yard run by Frye helped set up Diamond’s 3-yard touchdown run, which gave the Falcons their first lead, at 14-7, with 2:08 left in the first quarter.

From there, touchdown passes of 22 and 48 yards from Diamond to Jones pushed the score to 28-7 with 4:26 remaining in the second quarter.

But persistent McMinnville answered in a hurry. On the very next play from scrimmage, Rapp broke through a hole on the right side of the line and sprinted 80 yards for a touchdown, making the score 28-14 with 4:13 left in the half.

The next time the Grizzlies had the ball, Rapp ran 73 yards for a touchdown, making it 28-21 with 1:59 remaining in the second quarter.

“I have to give it to my O-line,” Rapp said of his three long first-half touchdowns, referring to the group that included junior Jesse Jones-Nguyen, senior Rylee Charter, senior Alexis Paloblanco, senior Mark Hartzell and senior Isaac Barajas, among others. “They blocked really well for me, and I can’t do it without my wide receivers. They make those seal blocks, so I can cut outside and get to the end zone.”

Liberty was able to answer before halftime. Falcons senior Kane McNabb, who also went 7 for 7 on extra-point kicks, drilled a 45-yard field goal from the right hash mark with 5.8 seconds left in the second quarter, giving Liberty a 31-21 advantage at the intermission.

The offensive fireworks continued early in the second half. Diamond scored on a 4-yard run to give Liberty a 38-21 lead with 7:25 to go in the third quarter.

McMinnville answered right back. Grizzlies senior quarterback Ky Hoskinson threw a pass to senior receiver Bryan Blank, who, after leaping high to make the catch, powered his way to the end zone to complete a 21-yard scoring play, trimming the deficit to 38-28 with 4:07 left in the period.

But McMinnville couldn’t get any closer.

Frye’s 16-yard halfback pass to Jones upped the Falcons’ lead to 45-28 with 2:28 to play in the third quarter. On the first play of the fourth quarter, Liberty junior running back Michael Campos scored on a 4-yard run, making the score 52-28.

McMinnville got a 2-yard touchdown run from Hoskinson with 8:32 to go, making the final score 52-34.

“It’s fun to win, but this was definitely hard,” Jones said. “We thought the score would be a little different.”

Diamond completed 17 of 23 pass attempts for 261 yards and three touchdowns, with no interceptions. He ran for a team-high 109 yards on 24 carries, with two more scores.

“We didn’t do anything too tricky,” Diamond said of the offense. “We had a few trick plays that we tried, because of the circumstance of the game, but other than that we were just doing our bread-and-butter plays — plays that come to us as second nature.”

Campos ran for 73 yards on 10 carries. Frye had 49 yards on eight carries, and sophomore Mitchell Denniston ran for 32 yards on his only carry.

Jones had eight catches for 177 yards. Frye, sophomore Tanner Steinbach and Campos each had two receptions for the Falcons.

For all the yards and points Liberty compiled, the totals might have been even bigger if it weren’t for two lost fumbles inside the 10-yard line.

“Any time I step on the field, it’s fun. But tonight was definitely a learning experience,” Diamond said. “Tonight, we learned that we need to finish drives, finish games, and just play disciplined.”

Rapp had a huge game for McMinnville, rushing for 216 yards on 11 carries. He had seven carries for 201 yards and three touchdowns in the first half. Rapp also had kickoff returns of 49 and 46 yards in the second half, in addition to making a leaping 33-yard reception to help set up the Grizzlies’ final touchdown.

“I don’t think about it,” Rapp said of his big plays. “I just think about the next one and try to help my team win.”

Hoskinson completed 7 of 17 pass attempts for 86 yards with a touchdown and no interceptions. He rushed for 26 yards.

McMinnville senior receiver Braden Woods had three catches for 21 yards. Rapp, Blank, junior Tyler Mishler and Charter each had one catch, with Charter’s reception coming off a deflection early in the contest.

For the McMinnville defense, senior Alton Dean had two fumble recoveries. Senior Jose Tavera, junior Mason Yochum and Rapp each had a tackle for a loss.

“This is going to make us better. We’re going to come back Monday, have a hard week of practice, and bounce back next Friday,” Rapp said. “We have a lot of talent. With a new coach and a new offense, we just keep learning. And we’re also trying to build a new culture here. We should build off of this next year. I’m excited for what the future holds.”