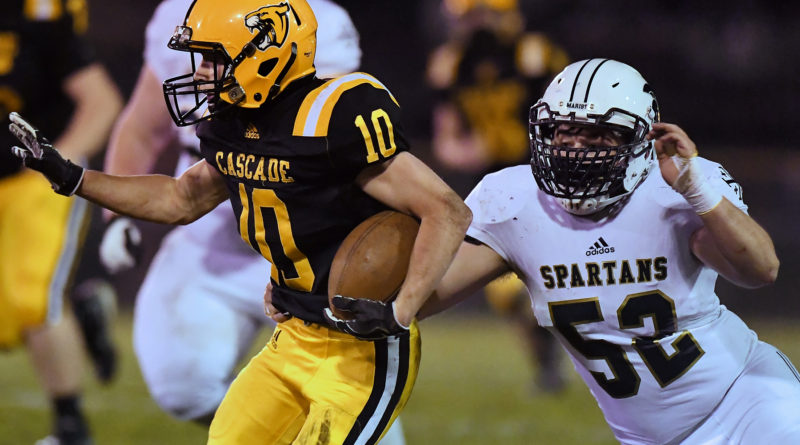 The Rangers have played second fiddle to Gladstone the previous four seasons in the Tri-Valley Conference, but their 43-14 rout of the Gladiators in Week 5 was the latest in a series of impressive victories — including trouncing Banks and La Grande, the teams that met in the 2019 state final — that has Estacada on track for its best season since 2016, when it went 9-2 and reached the semifinals.

Not the pandemic itself, but the effect it’s had on the Class 4A schedule, where it has wreaked havoc on a number of teams’ plans this season. Nearly every team has had at least one game canceled, either because it went into quarantine or an opponent did. Keep your fingers crossed that the final seven weeks are untouched by the pandemic’s effects, because the 4A playoffs figure to feature some outstanding matchups.

The Cougars pointed to this season with this senior class as the year they would climb back atop the 4A mountain after their last state title in 2015. They already had a victory over last season’s 4A Showcase champion (Mazama), and last week’s win in Eugene over the Showcase runner-up Spartans cemented Cascade’s status as one of the title favorites.

The Marshfield signal-caller has nearly double the passing yards of any other player in 4A, having thrown for 1,661 yards and 27 touchdowns with just three interceptions through six games. The Pirates will ride his hot right hand as far as they can — they hope to win the program’s first state title since 1992.

Waterman makes it a clean sweep of the midseason awards for the Pirates. The two-time all-state selection is having another fabulous season, with his 58 tackles second in 4A through Week 6 and 13½ tackles for loss third in the classification, to lead a defense that has allowed 9.3 points per game, second-fewest in 4A.

What we’re looking forward to down the stretch: The 4A playoffs

Class 4A is loaded, going seven or eight teams deep in terms of contenders. The top tier includes Marshfield, Cascade, Estacada and Marist Catholic, but there’s not much of a drop to the next tier of teams — Hidden Valley, Mazama, Banks, La Grande and Seaside. This classification also seems to have at least one surprise semifinalist every year. In 2015, it was 9-seed Cascade. The following year, it was Cascade again, this time as a No. 15. The next year, No. 7 Ontario. In 2019, No. 10 The Dalles. Only twice in the past decade did chalk hold and the top four seeds get through.