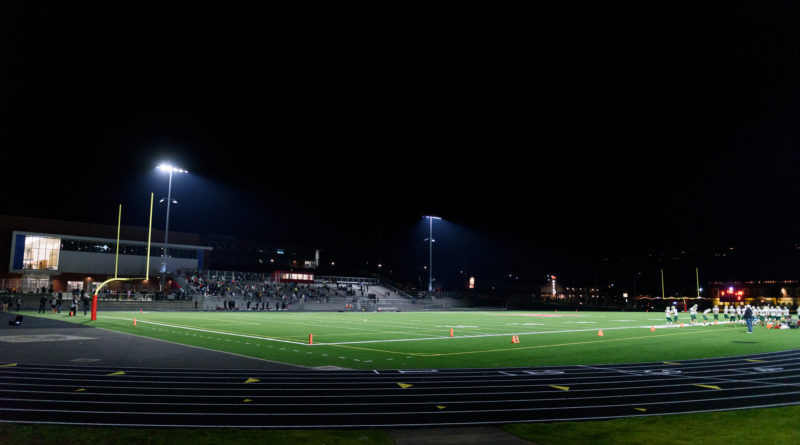 Here’s what stood out during the sixth weekend of action.

Roosevelt downs one North Portland rival; another awaits with PIL title on the line this week

This is Roosevelt coach Ryan McCants’ second season at the helm of the North Portland program, meaning there are aspects of the job he’s still learning on the fly.

One important lesson might just net the Roughriders a PIL title.

The Roughriders were coming off a 1-5 spring season during which opportunities to scout opponents were limited. They took a similar approach for their opener this season against North Salem, and the results were similar — a 48-28 defeat that extended their losing streak to six.

McCants and his staff examined how they prepared for that game and determined their prep work was lacking.

“Starting as a coaching staff, we learned how to scout an opponent better and bring what we’ve learned to our practice plans,” he said. “And as a team, starting with our seniors, we have started to buy into the process more each week and understanding the importance of a quality practice.”

Putting their regimen into practice has led the Roughriders to win their past five games, capped with a 28-22 victory over North Portland rival Jefferson last Thursday that set up a critical showdown this week with two-time reigning PIL champion Grant.

A victory over the Generals would virtually cinch Roosevelt’s first outright PIL championship since 2013. A loss, and the Roughriders would need help to end up with a share of the crown as they did in 2018.

“I honestly don’t know what the math says about the league title,” McCants said. “We are focused on Grant. Grant is tough because they do a great job of playing relatively mistake-free football. They spread you out but do a great job in the run game.”

McCants knows his team must clean up the mistakes that nearly cost it victory against the Democrats. A fourth-quarter fumble led to the tying score, and a holding penalty wiped out a potential go-ahead touchdown before Jackson Flatner caught a 32-yard touchdown pass with 1:37 remaining.

“We can’t have the turnover issues that we had last game,” McCants said. “We have to limit those, keep the chains moving offensively and get stops on defense. It should be a good game.”

After starting the season 0-3, many people wrote off Mountainside.

Three weeks later, and reports of the Mavericks’ demise appear to have been premature. A 27-26 overtime victory over Sunset on Friday evened their record at 3-3, and after a home game against winless Southridge, they’ll play host to seven-time defending Metro League champion Jesuit with an eye toward earning the school’s first league title.

“We started the season with a whole new lineup of guys new to varsity football,” coach John Mannion said. “That coupled with our early schedule (Lake Oswego, Westview and Tigard) provided our guys with a steep learning curve.”

Mannion said that during film session the day after the 30-13 loss to Tigard that dropped Mountainside to 0-3, nearly every player spoke up about things they could improve upon to turn things around.

“While we are far from a finished product, I am incredibly proud of the heart and commitment these guys have displayed toward each other,” Mannion said.

They have demonstrated that heart the past two weeks, rallying from double-digit deficits against Beaverton and Sunset, which speaks to the “resilience and scrappiness” (Mannion’s words) that Mannion has infused into the program’s DNA since its first varsity season in 2018.

The Mavericks could have folded when Sam Harker’s 35-yard field goal for Sunset sent last week’s game to overtime after they’d rallied from a 10-0 third-quarter deficit. Instead, senior quarterback Brian Mannion scored on a 1-yard run to put the Mavericks back ahead, and they survived when the Apollos missed the PAT following an 11-yard touchdown pass from Grady Newsom to Hayden Hurley.

Coach Mannion knows that all the work to get back to .500 would be for naught if Mountainside looks past a Skyhawks team that has been shut out in its previous two games and instead looks toward its Week 8 showdown with the Crusaders.

“I told the kids today that winning the past three games has made the next three games incredibly important,” he said. “Southridge is a very capable team from a couple of miles away. We need to continue to practice with the same passion and focus, and then battle and scrap on Friday night. That has been the identity of our program since we opened, and these guys are embracing that identity.”

‘A winner and a leader.’ Liberty QB Hiro Diamond leads another comeback to put Falcons in Pacific hunt

As Liberty took the field with one minute remaining against Newberg, having given up a late lead and fallen behind 49-42, coach Eric Mahlum gathered his offense.

“I looked at the guys and said, ‘One minute and three timeouts. You guys got this, no problem,’” Mahlum recalled. “Remember Grant?”

Mahlum referenced a 2019 Class 6A first-round playoff game in which quarterback Hiro Diamond, then a sophomore, led the Falcons back from a 21-point deficit to stun Grant, 52-49.

Diamond, now a senior, and a couple other players who were on the team that game smiled at the end of Mahlum’s words. Diamond then went out and led another game-winning drive, capping it with a touchdown pass to Mike Campos on the final play and running in the ensuing two-point conversion for a 50-49 victory.

“He’s a winner and a leader,” Mahlum said of Diamond, who finished 15 of 26 for 242 yards and four touchdowns and added 227 rushing yards on 25 carries. “He has definitely proven himself to be the most clutch player I’ve coached. He’s also one of the most competitive players I’ve ever coached. He really does believe if we have enough time, we can win the game.”

And that confidence, Mahlum said, filters through the huddle and along the Falcons sideline.

“There is a belief among all our players with Hiro behind center that we will find a way,” he said. “But I also think that Hiro believes in the guys around him and trusts more than just one player to make the play that is needed. On the game-winning drive, he completed balls to four different receivers. This gives guys lots of confidence knowing that Hiro trusts them and that on any play, they could be the guy Hiro finds.”

The Falcons have had a roller-coaster season, winning their first two, dropping two in a row, and now winning their first two Pacific Conference games. They have winnable games the next two weeks — home Friday against McMinnville and at crosstown rival Century the following week — although the status of standout middle linebacker Nate Smith, who went out with an injury after two plays against Newberg, is up in the air.

However, it’s looking increasingly like the Falcons’ Week 9 home game with Sherwood, also 2-0 in conference play, could decide the conference title.

Mahlum isn’t looking that far ahead, though.

“Our goals are the same as they’ve always been — get better each week and focus on beating the upcoming opponent,” he said. “If we take care of ourselves and respect the opponents we play each week, good things will happen. We just want to be playing our best ball at the end of the season.”

‘Our team is still behind.’ Imagine how good Thurston will be when it catches up with rest of Class 5A

Thurston coach Justin Starck still feels his team is behind schedule after missing the first two weeks of the season while in COVID quarantine.

If that’s the case, that news should scare any Class 5A contender looking to end the Colts’ two-year run as state champions.

The Colts knocked off Churchill 42-32 last Friday in their sternest test since returning to the field in Week 3. They held the Lancers to nine rushing yards, Kellen Humphries had two interceptions, and linebacker Vaun Halstead had nine tackles, including 4½ for loss.

The offense rolled up 504 yards of total offense, with Gavin Knights and Bryce Indell running for two touchdowns apiece and combining for 287 rushing yards.

Starck, though, looks at the team’s unsettled quarterback situation — he rotated junior Darien Witham and seniors Alex Boring and Cael Stewart behind center against the Lancers — and the rustiness of several other players and concluded, “Our team is still behind. For some of our kids, this was only their second game, and we didn’t get to participate in a jamboree. We are not where we’d normally be by Week 7, but we are trying to get caught up.”

They’ll need to sharpen their focus this week as they contend with Homecoming activities and a matchup with Midwestern League leader Crater, with which the Colts have had some spirited battles the past few seasons — including the 2019 Class 5A state final, which Thurston won 14-10 for its second consecutive blue trophy.

“We are very excited to play Crater,” Starck said. “Our schools have had a great football rivalry the past three to five years, and we expect Friday will be another great game. Crater is well-coached, and we are especially impressed with Caden Lasater and Jimmy Jordahl.”

Any remaining doubts about Cascade’s status as a Class 4A title contender dissipated Friday night when the Cougars held off Marist Catholic 38-33 in Eugene.

The Cougars avenged a 35-21 loss to the Spartans in Week 2 of the spring season to improve to 6-0 this fall.

Coach Brandon Bennett said the seven days between their Oregon West Conference-opening victory against Woodburn and their game at Marist Catholic “felt like the longest week ever. The boys felt that, too. I asked them Wednesday how they felt, and they responded with, ‘We are ready, Coach.’”

After settling for a short field goal on their opening possession, the Cougars went on a 98-yard drive to grab a 10-0 lead. They scored on six of their seven possessions and survived after Lucas Tuski’s 1-yard touchdown run (his third score of the game) pulled the Spartans within 38-33 with 4:19 to play.

Cascade recovered the ensuing onside kick and got a key fourth-down conversion late in the game to hold on.

“We still have a lot to clean up after that game,” Bennett said. “But I challenged the linemen all week. I told them, ‘This game is on you,’ and they showed up and played physical football all night. They controlled the line of scrimmage. It was a full team effort.”

The Cougars now have their sights set on a third consecutive OWC title. Their last three opponents are a combined 5-13, but Bennett isn’t counting any chickens quite yet.

“The next goal on the docket is a league title,” he said. “It started with Woodburn, and now it’s at Newport this week.”