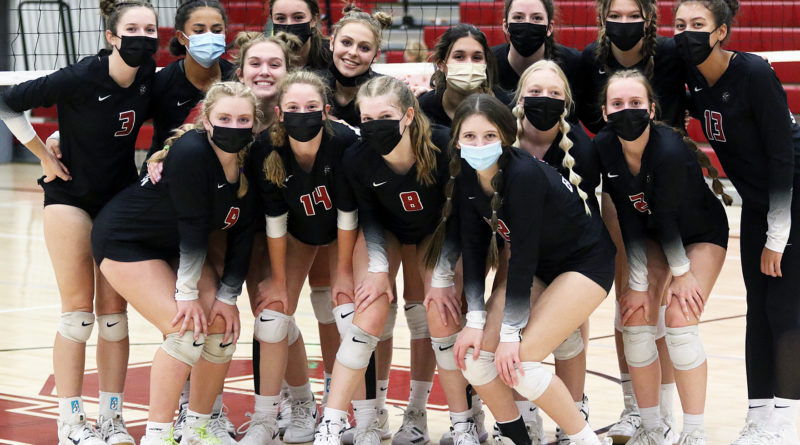 The Sherwood volleyball team got its conference championship.

But clinching that title was anything but easy.

The Bowmen, after getting off to a roaring start, watched Glencoe gain momentum — in a big way — before rallying in the decisive fifth set to get a dramatic 25-14, 25-15, 19-25, 18-25, 15-13 win over the Crimson Tide in a Pacific Conference showdown played in front of an enthusiastic Senior Night crowd Wednesday at Sherwood High School.

“It means so much to me,” Sherwood senior libero Gianna Friendy said during the Bowmen victory celebration. “I’ve played with these girls since I was 11. It’s really big to finish first in league. It’s really big for us. Wow, to win in five — after we won the first two. It’s really great.”

“This was really important, because it shows how we can play as a team,” Sherwood senior setter Alyssa Kapuniai-Ryan said. “When we get down, we know that our team chemistry is so strong that we can come back and win anything. It was an amazing way to end here on Senior Night.”

With the win, its 14th in a row, Sherwood improved to 10-1 in Pacific Conference play (17-3 overall), while also giving the Bowmen their first league championship since 2012, when Sherwood played at the Class 5A level.

“It’s really big to me, that we were able to come together as a team and win on Senior Night,” Kapuniai-Ryan said. “To me, it’s really important.”

“We had good communication, and we have great chemistry with the team,” Friendy said. “They’re all amazing girls. All the wins that we’ve gone through, we’ve gotten so close, and I love all these girls to death.”

With the setback, Glencoe moved to 7-4 in Pacific Conference matches (10-9 overall), putting the Crimson Tide in third place in the conference standings, behind Sherwood and second-place Newberg, which is 7-3.

“It was so much fun. After losing to them in three (sets) last time (on Sept. 20), going to five was a highlight,” said Glencoe sophomore right side Elisabeth Levick, who had a big performance for the Crimson Tide, both at the net and in the back row. “We had a lot of motivation, with it being our last away game.”

Speaking of motivation, Sherwood seemed to have plenty at the start of Wednesday’s match, looking to clinch the conference title on Senior Night. And the Bowmen rode that motivation to a fast start.

Sherwood, getting a kill by senior Emma Wagner off a set by Kapuniai-Ryan, and a couple points off of serves by sophomore Emily Fulton, sprinted to a quick 3-0 lead in the opening set.

Glencoe rallied to take a 6-4 lead, but Sherwood came back to reclaim the lead, at 8-7, on a point on serve by senior Savannah Cedillo — and the Bowmen wouldn’t trail again in the set.

With Kapuniai-Ryan serving, Sherwood got two kills each from junior Liv Van Austen and Fulton, all coming off sets by Kapuniai-Ryan, to open an 18-9 advantage.

Another kill by Van Austen would wrap up a 25-14 Bowmen win in the opening set.

Sherwood kept rolling in the second set. After getting a sideout kill by junior Rylee Perlmutter, the Bowmen trailed Glencoe 6-4, but that deficit wouldn’t last long.

With sophomore Hannah Brown serving, Sherwood scored 10 consecutive points. Fulton had a tip and a kill, Perlmutter had a tip and a block, senior Anyston Cuthbertson had a kill and Brown had an ace during the scoring spree, which ended with the Bowmen holding a 14-6 lead.

Glencoe closed the gap to 17-13 on a point on serve by sophomore Macie Schwinof, but the Crimson Tide wouldn’t get any closer. With Friendy serving, Sherwood got back-to-back kills from Perlmutter and Van Austen to close the 25-15 second-set victory.

Early in the third set, Sherwood, getting three kills by Perlmutter and a block by sophomore Kaylin Van Fleet, jumped out to a quick 6-1 lead, and it looked like the Bowmen were on their way to a sweep. But Glencoe had other ideas.

A sideout kill by Levick cut the Sherwood lead to 16-13. With junior April Jones serving, Glencoe continued to rally. Jones served back-to-back aces while senior Hannah Willard and Levick each had a kill, helping the Crimson Tide take an 18-16 lead. Glencoe pulled away from there. Kills by Willard and Levick and a set-point tip by junior setter Reese Morgan helped the Crimson Tide get a 25-19 third-set victory.

Sherwood tried to rally, cutting the deficit to 22-17 on a block by junior Caitlin Kirkpatrick, but Glencoe, getting a kill by Jones off a set by Morgan and a set-point ace serve from Levick, won the fourth set 25-18.

“I was very fired up,” Levick said. “I just wanted to give our seniors a win.”

“We knew that we had nothing to lose, so we just went all out,” Levick said of Glencoe’s performance in the third and fourth sets. “We just didn’t let the ball drop, and we all trusted each other.”

Momentum seemed to be on Glencoe’s side going into the fifth set, but Sherwood was determined not to let the match, and the chance to clinch the conference crown at home on Senior Night, slip away.

“I was a little nervous, I’m not going to lie, but I knew we’d pull through,” Kapuniai-Ryan said. “I knew we’d come together as a team and make it work.”

Sherwood, behind back-to-back kills by Kirkpatrick and Van Austen, grabbed a 3-1 lead early in the fifth set. Glencoe rallied to take a 9-7 lead when Levick had a back-row kill off a set by Morgan. The Crimson Tide pushed the margin to 12-9 when Willard had a kill off a Morgan set.

But Sherwood would respond with one last rally — a big one.

After getting a sideout following an out-of-bounds Glencoe serve, Friendy had serving duties for Sherwood, which was trailing 12-10.

“It was very stressful. I hate doing that,” Friendy said. “I always get stuck serving at the end of games, and I hate it. It’s very stressful, but I’m glad that I was able to pull it out at the end for my team.”

Following a Glencoe hitting error, Friendy had an ace, followed by a block by Perlmutter and a kill by Van Austen, giving the home team a 14-12 lead.

Levick, not letting up at all, scored on a tip, cutting the Sherwood lead to 14-13. On the next point, match point for Sherwood, Kapuniai-Ryan, at the net, hit a tip that rolled on the top of the net before dropping to the hardwood on Glencoe’s side of the court, giving the Bowmen a 15-13 fifth-set win.

“Oh my gosh. So many things were going through my head,” Kapuniai-Ryan said of that last point. “I was just hoping that it was going to go over.”

When the ball hit the floor, Sherwood’s championship celebration began.

“It was just an energy rush,” Kapuniai-Ryan said. “It was like, ‘Oh my gosh!’ It was just a really lucky shot.”

Sherwood will finish its Pacific Conference schedule Oct. 19, when it plays at Liberty. The Bowmen will then open the Class 6A state playoffs with a first-round match Oct. 27, very likely at home.

“It’s really exciting, knowing that we have a chance, and that we can pull through,” Kapuniai-Ryan said of the playoffs.

Glencoe will finish its Pacific Conference slate Oct. 21, when it hosts Liberty. The Crimson Tide will also look to benefit from the thriller at Sherwood as it gets ready for a possible postseason berth.