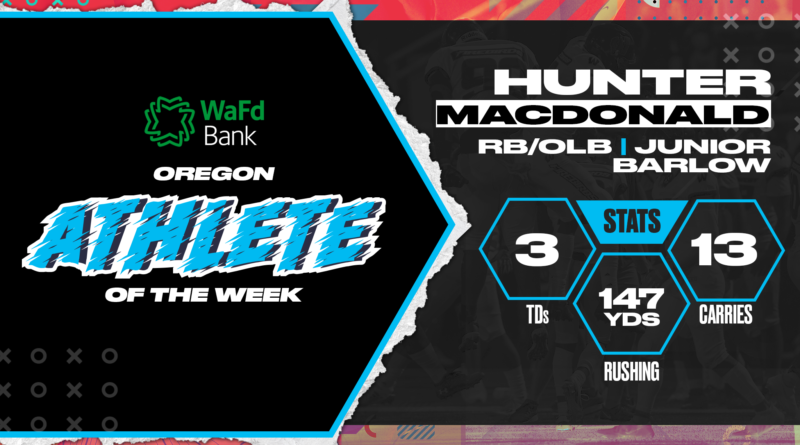 The junior gained 147 yards on 13 carries and scored three touchdowns in the Bruins’ 48-0 shutout of rival Gresham.

Alex Briseno, Silverton football: Briseno carried 17 times for 185 yards and three touchdowns as the Foxes cruised to a 48-8 victory over Crescent Valley.

Brayden Burton, Lebanon football: Burton rushed 20 times for 189 yards and three touchdowns to power Lebanon to a 37-27 win against Corvallis.

Hiro Diamond, Liberty football: Diamond carried 18 times for 269 yards and four touchdowns and passed for another score, pacing the Falcons to a 56-21 win over Glencoe.

Avirey Durdahl, Nelson football: Durdahl had three touchdown passes to Max Kirsch to help power the Hawks to the first win in program history, 27-12 over Centennial.

Trenton Hughes, Hood River Valley football: Hughes ran for four touchdowns, passed for two, blocked two extra points and had an interception to lead the Eagles to a 44-29 win over Redmond.

Caleb Kim, Sunset football: Kim rushed for 173 yards and three touchdowns on nine carries (more than 19 yards per carry) for the Apollos in their 39-2 win over Heritage of Vancouver.

Brock Mackey, Pendleton football: In the Buckaroos’ 70-6 rout of The Dalles, Mackey carried the ball six times — and turned four of them into touchdowns.

Colton Marsters, Roseburg football: Marsters ran for four touchdowns — including scores of 82 yards and 69 yards in the first half — as Roseburg improved to 5-0 with a 56-14 victory over Grants Pass.

Dom Montiel, Marshfield football: Montiel passed for 368 yards and six touchdowns with no interceptions, leading the Pirates to a 57-0 rout of Stayton.

Cole Prusia, Tualatin football: In Saturday’s 1-vs.-2 showdown against West Linn, Prusia made eight catches for 188 yards and three touchdowns, helping to power the Timberwolves to an emphatic 49-14 victory. (story)

Noah Stone, Hidden Valley football: Stone passed for three touchdowns, ran for one and returned a punt 45 yards for another, helping the Mustangs cruise past Phoenix for a 45-0 win.

Brock Thomas, Sheldon football: Thomas passed for four touchdowns and ran for two for the Irish, who earned a 54-37 win over South Medford.

Max von Arx, Grant football: von Arx did a little of everything in the Generals’ 35-20 win over Lincoln, finishing with 106 yards and two touchdowns rushing, a touchdown catch, a blocked punt and a fumble recovery.