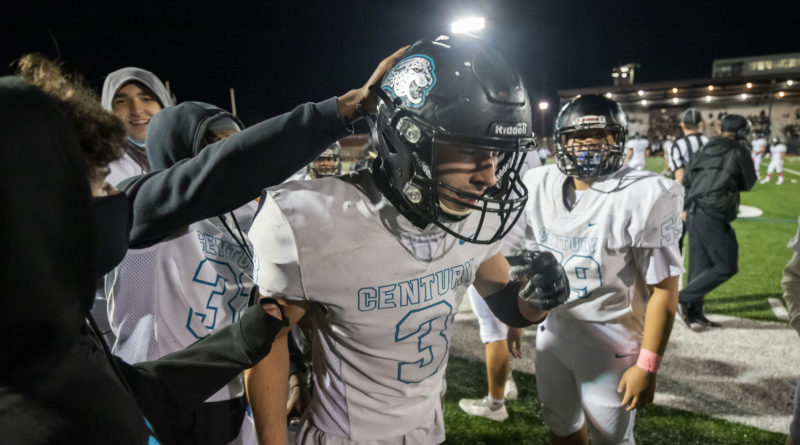 Thursday turned out to be a perfect birthday for Cayden Palmeri.

The Century senior linebacker made a game-high nine tackles and intercepted two passes to help the Jaguars secure their first win of the season, beating crosstown rival Glencoe 43-24 in a Pacific Conference matchup at Hare Field in Hillsboro.

His teammates’ boisterous rendition of Happy Birthday! in the postgame huddle made the day complete.

“That’s perfect,” Palmeri said. “I got to spend the day with my family.”

The Jaguars (1-5, 1-1) went 4-2 during the spring season and felt as if they’d built some momentum coming into the fall. While they entered Thursday’s game winless, they’d come close the past two weeks, losing by six to Oregon City and a single point to McMinnville in their conference opener.

“I mean, going from winning most of our games last year and then having an unfortunate season this year, it feels good to get this one,” said senior quarterback Tyler Mahlman, who threw for 387 yards and five touchdowns.

Mahlman picked on a young Glencoe secondary that featured a couple of sophomores at the corners, first by hitting on a series of quick hitches and outs, then exploiting speedster Kyle Hamnes, who burned the Crimson Tide with four catches for 212 yards and two scores.

“I can make any throw on the field, so it was just about finding the holes in the defense and doing what I can,” Mahlman said.

No throw was bigger than the one that followed Donovan Gallardo’s fumble recovery at the Century 5. Jaguars coach Danny Kernan eschewed a conservative play call deep in his territory, sending Hamnes on a skinny post.

He tested that faith by nearly overthrowing Hamnes around the 40, but the receiver stuck out his right arm and deflected the ball into his hands as he split two defenders, outracing them to the end zone for a 95-yard touchdown.

“I thought it was going to be an overthrow, but I caught up to it, snagged it and was gone,” Hamnes said.

Late in the half, Palmeri dropped into a deep zone right into the path of a pass by Royce Fasel, returning his first career interception 50 yards to the Glencoe 5. The Jaguars cashed in three plays later with a 1-yard pass from Mahlman to Jalen Ellis to lead 29-6 at halftime.

“That was when the momentum shifted, and we’ve got to learn as a program that that’s where you can’t jump ship,” Crimson Tide coach Ian Reynoso said. “We’ve got a couple of seniors that know how to do that, and then we’ve got a bunch of young guys who haven’t quite been there yet.

“We had some young guys playing positions for the first time tonight. They knew where our weaknesses were, and they did a great job attacking them.”

Glencoe (3-3, 0-2) turned the ball over six times, and while the Jaguars converted only two into points, the miscues meant the hosts couldn’t sustain any fluidity to their offense despite Fasel rushing for 280 yards and four touchdowns.

“I don’t care what your team is like, you have six turnovers, you’re losing the game,” Reynoso said. “That’s just too many mistakes.”

Century and Glencoe still must face the conference’s favorites in Sherwood and Newberg in the season’s final three weeks. The Jaguars head to Sherwood next week, and Mahlman believes his team can build off Thursday’s win and still make the playoffs.

“I’m ready to get more wins,” he said. “Go get some league wins, get to the playoffs, then go see what we can do.”