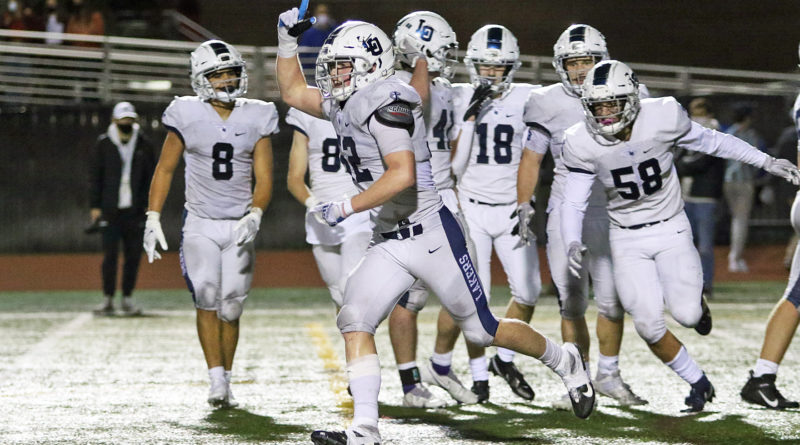 The Lake Oswego football team entered with a perfect 5-0 record.

Something had to give.

And the Lakers weren’t about to concede a thing.

Lake Oswego, jumping out to an early lead, and then fighting off a persistent Timberwolves squad the rest of the way, posted a 35-26 victory in a Three Rivers League battle of unbeatens played Friday in front of a large, enthusiastic crowd at Tualatin High School.

“This was fun. This is what you live for, these type of games,” said Lake Oswego senior quarterback Jack Layne, who passed for 270 yards and a touchdown. “Live for the big wins. Two good teams going at it. We stuck together, and it was awesome to come out on top.”

“This is great. It’s a great team win,” said senior Gabe Olvera, who rushed for 100 yards and two touchdowns, while also having an interception on defense. “That was a great team we played, and it was a great game. Everyone just stepped up and balled out.”

“It’s a big win, but we expected it coming in,” said senior receiver Dylan Layne, who had 108 receiving yards and a 2-point conversion catch. “We had a great week. We’ve got great coaches and great senior leadership. It was a fun game. It’s fun when you play a really good team like this.”

Lake Oswego, which came in ranked No. 3 in the Class 6A SBLive media poll, improved to 6-0 overall and 2-0 in TRL play, putting the Lakers alone atop the league standings.

“This is what it’s all about — Friday nights, the crowd was going crazy. It was awesome,” Dylan Layne said. “We were expecting a battle. Coach (Steve Coury) said to stay poised. They’ve got some good players over there, but we’ve got good players, too.”

Tualatin, which was ranked No. 1 in the SBLive media poll, moved to 5-1 on the season and to 1-1 in TRL games, putting the Timberwolves in a tie with Lakeridge, Tigard and West Linn for second place in the league standings.

“This will wake us up a bit. You get this feeling, and it’s not a feeling you like,” said Tualatin senior receiver Peter Burke, who scored two touchdowns. “It’s a great team over there. And we’ve got a great team. That’s a great LO team. They’re always great. I think we’ll see them again, for sure — late November or early December.”

After a scoreless first quarter, Lake Oswego broke through first, capitalizing after senior lineman Gavin McGuire recovered a Tualatin fumble on the final play of the opening period.

Olvera capped a 64-yard drive, scoring on an 8-yard run on a direct snap, giving the Lakers a 7-0 lead with 7 minutes and 53 seconds remaining in the second quarter.

Tualatin answered, getting a 5-yard touchdown pass from senior quarterback Jackson Jones to Burke, who ran a fade pattern to the right side of the end zone. A 2-point conversion pass attempt failed, leaving Lake Oswego with a 7-6 advantage with 3:38 before halftime.

The Lakers were able to add to their lead before the intermission.

A 23-yard pass from Jack Layne to Dylan Layne helped set up a 2-yard touchdown run by Olvera, again coming on a direct snap. The extra-point kick failed, leaving Lake Oswego with a 13-6 lead with 34 seconds left in the first half.

“It was very exciting,” Olvera said of his two first-half touchdown runs. “I have to give all the credit to my line. They really opened things up. Those were wide-open holes.”

The Lakers carried their momentum to the second half. In the opening possession of the third quarter, they moved 70 yards in 11 plays for a score. Jack Layne capped the drive, scoring from 15 yards on a quarterback draw, giving Lake Oswego a 21-6 advantage with 6:17 left in the period.

Things would get even more dramatic after that.

On the first play of the fourth quarter, Tualatin senior Malik Ross scored on a 1-yard run, tying the score at 20-20.

Now, it was Lake Oswego’s turn to answer — and the Lakers did just that.

On their ensuing possession, Jack Layne teamed with senior receiver Justius Lowe for a 39-yard touchdown pass. That put Lake Oswego back in front, 27-20, with 9:18 remaining.

Tualatin, again, had a quick response.

Four plays later, Jones hooked up with Burke on a 48-yard scoring pass. The extra-point kick failed, leaving Lake Oswego with a 27-26 lead with 8:32 to play.

“It was good,” Burke said of the touchdown play. “Jackson put it in a perfect spot. I couldn’t ask for a better ball. I just went up and grabbed it, and do what I do.”

The Timberwolves had a chance to take their first lead after their defense stopped the Lakers on fourth down at the Tualatin 21-yard line, but they weren’t able to get a first down.

Lake Oswego capitalized on its next possession, getting a 15-yard touchdown run by junior Calvin Macy. Jack Layne threw a 2-point conversion pass to Dylan Layne, giving the Lakers a 35-26 lead with 2:56 left.

The Lake Oswego defense again stopped Tualatin from getting a first down. The Lakers, with Jack Layne sneaking for a first down on a fourth-and-1 play, were then able to run out the clock, wrapping up the win in the battle of unbeatens.

“It was just relief. It was pure joy,” Jack Layne said of his feelings at the end of the game. “You work so hard for this, and then you see it come to fruition. It’s awesome.”

“I was ecstatic,” Dylan Layne said. “I love my team. We’ve got some great guys. It was really nice to get this one.”

The Timberwolves also came away with some positives, especially how they kept battling throughout the contest.

“I think it was because of the guys up front,” Jack Layne said of the group that includes senior Matteo Tagliabue, senior Austin Leykam, senior Paul Stephens, junior Grant Onaitis and McGuire, among others. “We knew it was going to be a battle. The coaching staff did an awesome job all week, and I think we played as a team.”

“It was pretty intense. We had to calm down a couple times, but we kept our energy up. It was a good fight,” Olvera said. “We kept our heads up. When bad things happened, we just kept our heads up and continued to play hard.”

“I was able to make some plays,” he said. “Jack made some great throws to me, and the coaches had a great game plan.”

For the Lake Oswego defense, McGuire had a fumble recovery, and Olvera had an interception.

“You have to live in the moment. You have to play the ups, play the downs, don’t get too high, or too low,” Dylan Layne said. “We were expecting a battle. We were on the road, there were packed stands, and it was hard to hear out there. We knew there would be ups and downs.”

For Tualatin, Jones completed 16 of 29 passes for 234 yards. Ross ran for 106 yards on 21 carries. Burke had four catches for 67 yards, and senior Cole Prusia had four receptions for 51 yards.

For the Timberwolves defense, Ross had an interception. Senior Brandon Chin and junior Bodan Griffith each had a tackle for a loss.

“We have to focus in practice,” Burke said. “We took too long to get to the line, and that cost us. We have to keep practicing hard and working hard. That’s going to help us out down the road.”

Both teams return to action Oct. 15. Tualatin will travel to Lakeridge and Lake Oswego will face Oregon City at Pioneer Memorial Stadium in Three Rivers League contests scheduled to start at 7 p.m.