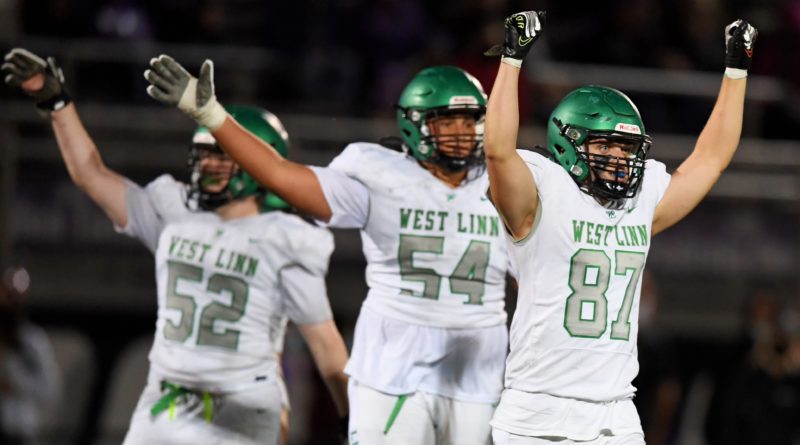 Nick Sakys felt a few butterflies fluttering in his stomach before the West Linn sophomore took the field for his first career start Friday night at Lakeridge.

But when he took the field with 2:15 remaining, his team trailing by six and needing to traverse 38 yards for a winning score?

“I didn’t really feel that nervous,” Sakys said. “You’ve just got to come out and execute.”

After converting a third-and-17 to keep the drive alive, Sakys hit sophomore tight end Gus Donnerberg on a 9-yard seam route in the back of the end zone to lift the No. 4 Lions to a 28-27 Three Rivers League victory over the No. 7 Pacers.

“This is probably one of the best nights of my life,” said Sakys, who finished 18 of 25 for 173 yards, two touchdowns and two interceptions. “We were able to pull it off. It’s so awesome.”

Sakys learned Sunday he would take first-team reps during the week. On Wednesday, he learned he’d take over for Chase Harmon, the senior who had beaten him out to start the season but had struggled in the Lions’ 49-14 loss to Tualatin last week.

“I had so much support from all these guys,” Sakys said. “I mean, I was nervous to come out here and try to lead everybody, but at the same time, I was super excited. It was one of the biggest opportunities in my life, and I’m so thankful.”

Lions coach Chris Miller acknowledged he had a few qualms throwing the sophomore into the fire against the undefeated Pacers but thought Sakys would be able to overcome any nerves he might have felt.

“He’s a really poised kid, and I didn’t think the moment would be too big for him,” Miller said. “That last drive, he was extremely poised. He threw the ball away in the right spot when we didn’t get what we wanted on second down, and then made a good pass to Gus on third down.

“He made some great plays, something we can build off, and it’s nice to be able to build off a big win. The future for Nick is really bright.”

Sakys received help from an offensive line that took last week’s loss personally and resolved to make life easier for the first-time starter.

“We didn’t want him on the turf at all,” said senior left tackle Braylon Cornell. “We were so determined and just had that mentality of not letting him get sacked.”

They came close to meeting that goal — the Pacers sacked Sakys once. Cornell and his linemates also opened gaping holes all night for junior running backs Ben Winjum and Koffi Kouame, who stepped in for injured senior Jaxon Steinhauer (ankle) and each went over 100 yards rushing.

“We were nonexistent last week … but we bounced back,” Cornell said. “All week at practice, it was just a different mentality. We just needed to outbully everyone, outmuscle everyone, and we did that tonight.”

Yet with three minutes remaining, it looked as if the Pacers would end a seven-game losing streak to the Lions and improve to 6-0 for the first time since the undefeated 1987 state championship season.

Nui Tovey and Jake Reichle combined to stop Earl Ingle on fourth-and-inches at the Pacers 6-yard line to close the third quarter. Lakeridge then took a 24-21 lead on Keaton Emmett’s 30-yard field goal with 8:17 remaining.

Reagan McDowell recovered a fumble on the ensuing kickoff at the Lions 27, and after gaining a first down, the Pacers (5-1, 1-1) looked poised to take a two-possession lead.

Instead, the Lions defense stiffened, forcing Lakeridge to settle for a 25-yard field goal by Emmett with 5:44 left.

“That’s one of the best defenses in the state. Their front seven is just so good,” said Pacers coach Spencer Phillips. “So, I felt comfortable with our kicker, and I knew we would be up six. I trusted our defense that they could come up big.”

Indeed, they did, with Zachary Larson staying stride for stride with his man down the right sideline and intercepting a pass at the Pacers 6 with 3:23 to play.

One first down would’ve likely sealed the deal for Lakeridge. Instead, the Lions (5-1, 1-1) got the three-and-out they needed, giving them one final chance with a short field and plenty of time left.

Reichle and Ethan Biondine combined to sack Sakys on first down, and the Lions gained nothing on second down. Sakys eluded pressure on third down and threw the ball toward the 6-foot-3 Donnerberg, who reached high to make a leaping grab right at the first-down stick.

“He just went up and made a great catch,” Sakys said.

Winjum then turned a screen pass into another big gain, breaking two tackles to get the Lions to the 9.

Three plays later, Donnerberg got between defenders down the seam and hauled in the winning pass.

“Before the game, we told the players, ‘You guys have got to be the ones to make the plays in the big moments,’ and they did tonight,” Miller said.

“We were planning for those seam plays all week,” Kuenzi said. “We were in position, but they’re great players, and they made a great play, so respect to them.

“They’re a tough team. I just hope we see them again.”

The Lions made sure there would be no repeat of a week ago, when their offense was kept out of the end zone for the first time in the past four years. They took the opening kickoff and marched 74 yards in 13 plays, with Ingle scoring on a 2-yard Wildcat run.

The Pacers needed 2½ minutes to answer, with Ryan Oliver hitting Joey Olsen on a 48-yard pass to set up Reichle’s 4-yard touchdown run.

Kuenzi gave Lakeridge a 14-7 lead with an electrifying 74-yard interception return for a touchdown. West Linn responded with a quick drive consisting of four runs of 10 yards or more, with Kouame bursting 19 yards for the tying score.

The Lions took a 21-14 lead to the locker room on Sakys’ 24-yard touchdown pass to Barret Brundage. The Pacers forged a 21-21 tie midway through the third quarter on Oliver’s 60-yard pass to Olsen, who had three catches for 162 yards.

“Ryan had that one ball picked, but otherwise, he and Joey were able to connect several times,” Phillips said of his junior quarterback, who finished 7 of 13 for 205 yards. “I haven’t had to ask Ryan to win a game yet this season, but he made some big plays tonight and played well.”

In the end, though, it was the sophomore on the other side of the field who came up with the biggest play of all.

“Nick definitely exceeded all of our expectations coming in here,” Ingle said. “He had a 5-0 team to go up against, and they were obviously no joke, and he definitely did well for what we put him up to do. I was very, very proud of him.”