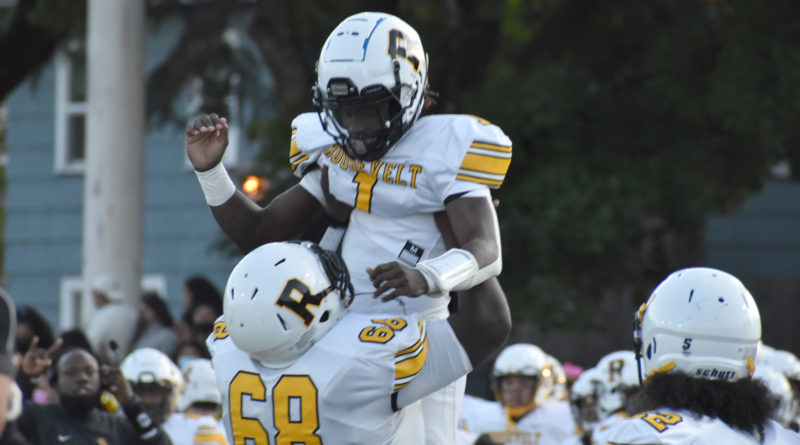 NORTH PORTLAND — The Roosevelt Roughriders scored a 28-22 road win over Jefferson on Thursday night to put themselves in position to play for the PIL football title next week.

Roosevelt appeared to have delivered the knockout blow late in the third quarter when quarterback Imarion Kelly slipped a quick screen pass toward the sideline for running back Lindell Betts, who zipped down the sideline for a 23-yard touchdown on fourth-and-long.

The Roughriders had punted on the previous play, but a holding penalty against Jefferson gave the Roosevelt offense a second chance.

Fernando Cortes-Cruz booted the extra point, and the Roughriders took a 22-6 lead to the fourth quarter.

The Democrats made it a one-possession game midway through the fourth when Jeray Mott Jr. scored on a short run and Jeremiah Matthews added the two-point conversion.

Needing a quick three-and-out, Jefferson’s defense did one better when Matthews recovered a fumble on Roosevelt’s side of the field.

“We knew we were not out of the game — it was all about putting in the effort,” Jefferson quarterback Dondrae Fair said.

Fair immediately ripped off a 17-yard gain around the left side, then scrambled again to convert third-and-7 and put the Democrats on the doorstep.

Facing another third down, Fair kept the ball and raced around the right side, only to absorb a big hit at the line of scrimmage. But just as the tackler made impact, Fair managed to shovel the ball outside to Mott Jr., who zipped ahead and made a headfirst Superman dive over the goal line for the 10-yard touchdown.

“The linebacker came to me, so I made a quick reaction to get the ball out,” Fair said.

Fair fired a short pass to Matthews on the two-point try that tied the score at 22-22 with little more than three minutes remaining.

It took only a matter of seconds for Roosevelt to put itself in position for the winning score.

Izaya Laguardia, one of the up men on the kick return team, snagged a line-drive kick and ducked and dodged his way inside the Democrats’ 20-yard line.

The Roughriders nearly squandered the opportunity when back-to-back holding penalties took a touchdown off the board and moved the ball back outside the 30. Roosevelt responded with Kelly sending a short pass toward the sideline for Jackson Flatner, who turned upfield in a flash and cut back to the middle at the 10-yard line to find the end zone for the winning 32-yard touchdown.

“It was a blur after I got the ball — I was just going on instinct,” Flatner said.

Jefferson’s hopes ended with Fair being pulled down short of the marker on fourth-and-10.

“We had to trust that we had put in the work to execute at crunch time, and that turned out well for us,” Roosevelt coach Ryan McCants said.

“We look at it one week at a time, so we’ll enjoy this one, then we’ll talk about Grant when we meet as a team on Saturday,” McCants said.