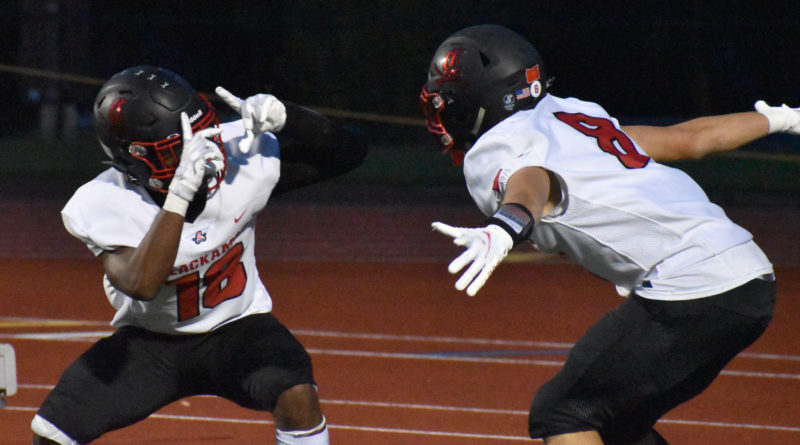 The Clackamas football team can strike pay dirt any number of ways. Senior receivers K.J. Johnson-Gibson and Miles Williams are proof of that.

The two breakthrough stars have combined for 11 touchdowns this season. Eight of those have come through the air, while Johnson-Gibson also has a pick-six, and Williams has a rushing touchdown and has taken a punt return to the house.

“K.J. is not afraid of contact. He’s a skill player, but he plays with an edge. Anytime he touches the ball, he’s a threat to go the distance,” Clackamas coach James Holan said. “Miles is an explosive player. We could throw him the ball every single time if we wanted to. He’s dangerous — an absolute playmaker.”

Johnson-Gibson ranks second in the Mt. Hood Conference with 324 receiving yards, averaging a whopping 30 yards per catch. He has the speed to beat defenders deep, but many of his long gains come after making a short catch and juking his defender, relying on the moves he picked up as a running back in youth leagues.

“I want the same expression every play,” Johnson-Gibson said. “I don’t make eye contact, and I run my routes with the same effort, so the defender can’t tell any difference.”

Williams ranks third in the conference with 293 receiving yards. He needed the first quarter and a few extra seconds to find the end zone three times in last week’s 47-0 win at David Douglas.

“The mentality is that it is my ball, so when I see it up there, I go and get it,” Williams said.

It is pretty much a certainty that they will find the end zone every game. The question is which of them gets to star in ‘Showtime.’ That’s the celebration planned for whichever of them scores first on a given Friday night.

Last week at David Douglas, Williams got his number called on an end-around run, flashing around the corner from five yards for the touchdown. He slapped some high-fives and waited for Johnson-Gibson to race from the far side of the field. The two met under the goalpost, where Johnson-Gibson pantomimed a photographer, while Williams posed for the pretend camera.

“We always try to come up with something different and have fun with it,” Johnson-Gibson said. “It’s only for that first touchdown, though. After that, it’s just back to the sideline.”

On the defensive side, K.J. gives the team a shutdown corner and Williams is in on many tackles from his safety spot. Johnson-Gibson leads the league with four interceptions.

“He’s an absolute ball hawk,” Holan said. “He’s a guy who takes away the whole side of the field.”

The duo is part of a tight wide receiver/secondary unit made more so by the fact that each has a brother on the team.

K.J.’s brother, junior Keontae, often lines up on the opposite side of the field at cornerback.

“There is not telepathy or magic dust, but they are both really good football players — it’s pretty much like having 1A and 1B out there,” Holan said.

The Johnson-Gibson brothers are known for a competitive streak that shows itself whether going against each other on the practice field or at home with a marathon session of board games.

“They are brothers. No one wants to lose. They get after it, but it’s always in the right spirit. They are always trying to make the other one better,” Holan said. “They feed off each other — you definitely know they are brothers when they are out there together.”

Miles has a fraternal twin in Mason, who sees most of his action on the special teams unit. The two are never far apart, often sharing time playing video games or watching television.

“We’re really close, and we do everything together,” Miles said.

Clackamas (6-0) has rolled through its early-season schedule, going to the mercy-rule running clock three times. The only challenge came in a 38-30 road win against Washington power Camas — a game in which Miles swiped an interception to ice the victory.

The Cavaliers face their biggest tests ahead with games at PIL-leading Grant on Thursday night, followed by another road test the following week at Barlow — a 6A semifinalist in 2019.

The regular season ends with what has become an annual clash for the Mt. Hood Conference crown when Clackamas goes to Hillsboro Stadium to face No. 2-ranked Central Catholic on Oct. 29.

“We are focused on whoever the team is that week, and we want to go 1-0 for that week,” Williams said. “But you do remember that Oct. 29 date — it’s a motivator.”

Johnson-Gibson and Williams both figure to provide plenty more fireworks down the stretch as Clackamas looks to prove itself worthy of mention among this year’s 6A title contenders.

“They are great football players and great people — they are making me look like a great coach right now,” Holan said.

‘I’m a playmaker. That’s what I am.’ Miles Williams walks the walk for Clackamas in thrilling season-opening win at Camas

First meeting between Clackamas, Nelson offers early glimpse at what rivalry will become: ‘aggressive and chaos’ but ‘all love’