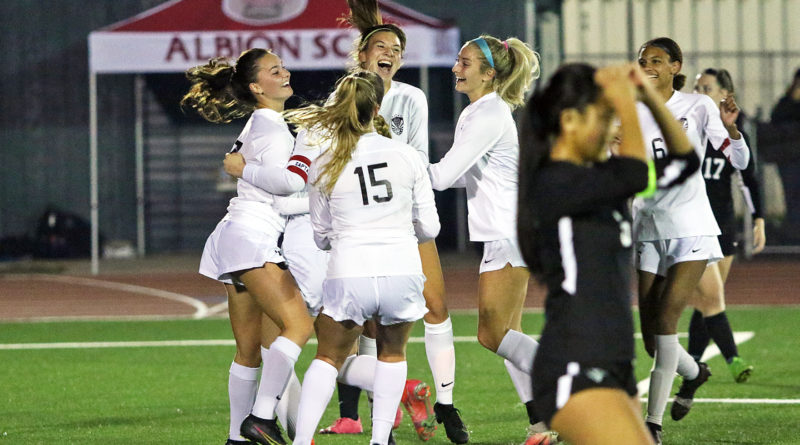 The Tualatin girls soccer team was ready for battle.

The Tigard squad was also prepared for a battle.

That’s exactly what it turned out to be — a battle.

And, when that 80-minute battle came to an end, the Timberwolves got to celebrate a hard-fought victory.

Tualatin, scoring once in each half, came away with a 2-0 win over the rival Tigers in a spirited Three Rivers League opener Monday at Tigard High School.

“Oh yeah, it was a fight out there,” said Tualatin junior forward Olivia Brunson, who scored the first goal. “This is great. It’s a huge rivalry between us and Tigard, so, obviously, we were super excited about it.”

“It was obviously super competitive, all across the line, from back line to front line,” said Tualatin junior defender Avery Porter, who scored the Timberwolves’ second goal. “Everyone was out there fighting and scrapping. It was a really fun game.”

“It was so fun. It was definitely a battle, but it’s always like that when we play our rivals,” Tigard senior forward Avery Alderman said. “It will always be a battle, but at the end, we always shake hands.”

Tualatin improved to 4-2-2 on the season. Maybe more important to the Timberwolves is that they got off to a 1-0 start in Three Rivers League play.

“It was just a huge game for us, going into league and getting a win,” Porter said. “It’s a great start for us, and hopefully we’ll continue that trend.”

“This was a real important match,” Bronson said. “It started us off with a win, and hopefully it will set us up for more success.”

Tigard moved to 2-6. But, the Tigers say, the strong performance in Monday’s match is a good sign for the future.

“We had so much effort. I’m so proud of my team,” Alderman said. “We couldn’t have played any better. It was a really good game. For sure, we can build on this.”

“I think we played really well. And, today, I think Tigard really showed up to play our best,” said Tigard sophomore Maya Hawks, who had a huge game in goal for the Tigers. “We were definitely fired-up for this match.”

So were the Timberwolves — all they had to do for motivation was look back to the revised 2021 spring season, when they fell 1-0 to the rival Tigers.

“This was a huge game,” Porter said. “Last year, we lost to Tigard, after beating them for a while. That was definitely motivation. We had a lot of returning players, and we knew that last year, we had the ability to win, and we let ourselves down. So, this year, we came out and made sure that didn’t happen, and we got the result we wanted.”

The motivated Tualatin squad went on the attack right away, getting shots on goal from junior Maya Loudd, senior Brook Burke and senior Sophia Aldinger in the opening 10 minutes and 30 seconds of the contest. But Hawks, and the Tigard defense, including senior Arly Tercero Simon, junior Claire Shelby, junior Isabella Jett and freshman Kiera Grant, withstood the attack, with Hawks making the save on all three of those attempts.

“I think the back line has been working a lot better over the course of the season,” Hawks said.

Despite Hawks’ best effort, Tualatin was able to break through.

Loudd, who kept the pressure on Tigard all game, fired a line-drive shot from 20 yards on the right side. Hawks, diving to her right, was able to block the shot. But Bronson, reading the play, and being in the right place at the right time, knocked a follow-up shot from close range into the back of the Tigers goal, giving the Timberwolves a 1-0 lead with 26 minutes and 4 seconds to play in the first half.

“That was really exciting,” Bronson said. “Maya had a great shot, and the keeper hit it, and I just finished it. That felt great.”

Tualatin, trying to build on its momentum, got two shots on goal from both Burke and junior Avery Pratt, and one from sophomore Jalissabeth Moreno, in the final 22 minutes of the first half, but Hawks made the save on each of those attempts.

Meanwhile, the Tualatin defense, including Porter, Pratt, junior Peyton Howard and junior Grace Richmond, allowed Tigard just one shot on goal in the first half, a free-kick attempt by Tigers sophomore McKenna Eggleston with 32:35 before the break, with Timberwolves senior goalkeeper Cate Van Valin making the save.

“We have a really strong back line,” Porter said. “We have a lot of versatile players. We communicate well together. We’ve all been playing together for years and years, and it’s just fun to play with everyone.”

Tigard, facing the 1-0 deficit after the first 40 minutes, came out with plenty of enthusiasm to start the second half. And the Tigers tried their best to turn that enthusiasm into an equalizing goal.

With 32:30 left, Alderman, breaking into the clear on the right side, fired a hard shot, which was blocked by Van Valin. Less than a minute later, Tigard junior Abigail Hergert hit a hard ground shot from 12 yards, with Van Valin having to dive to her right to make a save.

“We were so fired up,” Alderman said. “During halftime, we had a talk. We knew that we were in the game, but we just couldn’t get any opportunities.”

Later in the second half, Tualatin got a prime opportunity, and the Timberwolves took advantage of it.

With 23:54 remaining, Tigard was whistled for a handball in the penalty box. Porter, taking the ensuing penalty kick, knocked the ball past a diving Hawks, into the left side of the Tigard goal, upping the Timberwolves’ lead to 2-0.

“We practiced penalty kicks for the first time the other day, in practice,” Porter said. “I knew I had to step up and take it. I just had to place it, and I put it away. It was great. Obviously, it always feels good to score a goal, especially off a PK. Those are always stressful.”

With the Tualatin defense keeping the Tigers in check the rest of the way, the Timberwolves were able to close out the 2-0 league-opening victory over their rivals.

“We did really well connecting with the midfielders and forwards,” Bronson said. “And we stayed collected, and we kept ourselves together in the back to get the shutout. This was really fun.”

Tualatin had 22 shots on goal and four corner kicks.

For Tigard, Hawks had an incredible 19 saves.

“I was super fired-up for this match. I was visualizing it all weekend,” Hawks said with a smile. “I had a couple great saves in the second half. I had this good corner, and I knocked it out with my fingertips. That had me really excited. I had a lot of fun. I love it when I get a lot of action.”

Tigard had three shots on goal and one corner kick.

“It was really intense. There were so many fouls, but we all pushed through it,” Alderman said. “This was really fun, and I’m playing against a lot of my friends. Sure, it’s a rivalry game, but after the game, you can still say hi to your friends, and that’s really fun.”

“My goal was just to be aggressive out there, and to talk with the back line, and I really think we completed our goals, even though the score didn’t reflect it,” Hawks said. “We’re definitely going to build on this match. Thursday, we’ve got St. Mary’s, and I think we’re going to take this match and grow and use it to win more games.”