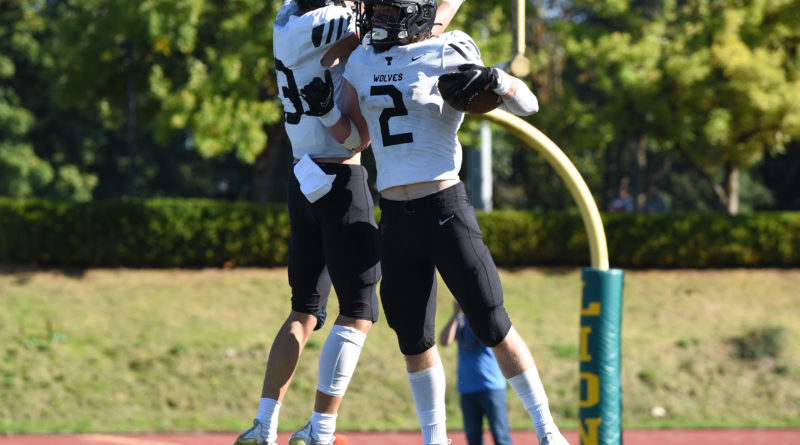 It’s not just a random day.

It is a day that meant a lot to the Tualatin football team. It was a day — more precisely, it was what happened that day — that provided the Timberwolves with so, so much motivation.

March 5, 2021, was the opening day of the revised 2021 spring high school football season. On that day, the Timberwolves started their season with a 37-6 loss to West Linn in a game played at Tualatin High School.

That game was on Tualatin’s mind — and it especially was on Cole Prusia’s mind — during Saturday’s rematch between the powerhouse squads.

The Timberwolves, with a dominant performance, and getting a huge game from Prusia, got some revenge with a 49-14 win over the Lions in a Three Rivers League opener played under warm, sunny skies at Wilsonville High School.

“Heck yeah, that was motivation,” Prusia said with a smile as he celebrated with classmates following the victory. “The COVID year was an iffy year for everyone, but this year, it showed that we really put in the offseason work.”

“I know that this rivalry means a lot, and it’s great to be on top,” Prusia said. “It means everything. I think it’s been 15 years since we beat them. We put in a solid four days of practice — no, it was five — and we just kept building every day. We built the team chemistry and worked hard together, and it showed. It paid off, and it was a great time.”

Prusia, who transferred to Tualatin from Clackamas, made an impact right from the start of his high school football career with the Timberwolves. In his first varsity game for Tualatin, as an unknown sophomore receiver, Prusia threw a 31-yard touchdown pass off a reverse, and he booted a 34-yard field goal in a 53-7 home win over Lakeridge.

He’s been a force for Tualatin ever since. However, in last spring’s season opener, West Linn limited Prusia to five catches for 32 yards in its victory.

There was no limiting Prusia in Saturday’s rematch.

“Oh my God, it wasn’t a good game last year, and I just wanted to build from that,” Prusia said. “And so did the team, and we showed that we did, because we came out on top.”

The 6-foot-3, 202-pound Prusia, a Princeton commit, seemed to be unstoppable throughout Saturday’s game. He had eight receptions for 194 yards and three touchdowns. He had a monster first half, making seven catches for 132 yards with two scores.

Prusia’s third catch was a 24-yard touchdown reception from junior quarterback Jack Wagner, tying the score at 7-7 with 6 minutes and 26 seconds left in the first quarter.

He also pulled in a 42-yard scoring pass from senior quarterback Jackson Jones, who, while falling backward, found Prusia open deep up the middle, giving the Timberwolves a 28-14 lead with 2:29 remaining in the second quarter.

Prusia was even on the front end of a hook-and-ladder play in the first half, catching a short pass from Jones and quickly pitching the ball back to senior running back Malik Ross, resulting in a 21-yard gain for the Timberwolves. The Jones-to-Prusia touchdown pass came on the very next play.

Prusia had one catch in the second half, but it was a big one.

Catching a quick pass from Jones on a bubble screen to the left side, Prusia followed a bevy of Tualatin blockers up the field for a 62-yard touchdown, giving the Timberwolves a 35-14 advantage with 5:16 to play in the third quarter.

“It was fun,” Prusia said of his three-touchdown day. “All I can say is that my team really pulled through. (Senior lineman) Lucas Edwards, with that block on the last touchdown, was big. It was a team effort.”

And that Tualatin team got to celebrate a huge win on the Wilsonville High School turf.

“This was the most fun of our lives — seriously,” Prusia said with a smile.

‘We showed them what’s up with our Tualatin team.’ Timberwolves defense answers the bell, posts ‘shutout’ of typically high-scoring West Linn