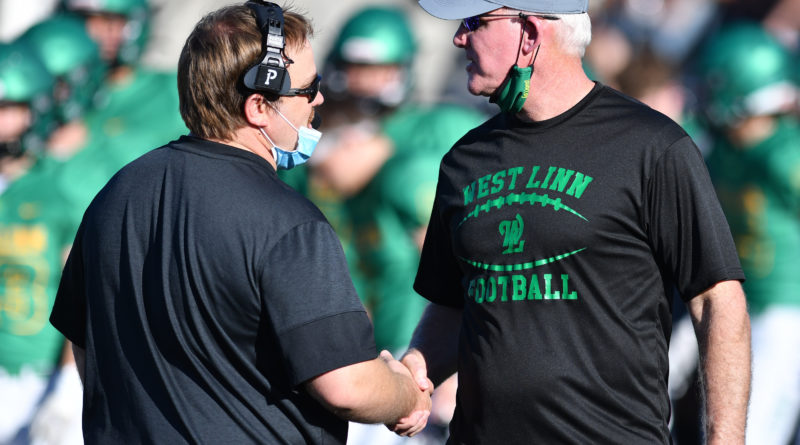 Top-ranked Tualatin no doubt made a believer of anyone who saw the Timberwolves’ demolition of No. 2 West Linn on Saturday — among those believers, the opposing head coach.

“The better team won,” Chris Miller said after his team’s 49-14 loss at Wilsonville High School. “We tip our hats.”

It wasn’t just any loss for the Lions; it snapped the program’s 10-game win streak dating to the spring season, and, shockingly, it ended with a running clock in the second half. The game also marked the first time since Week 6 of the 2017 season that West Linn was held without an offensive touchdown. Both Lions touchdowns came on fumble returns in the first quarter.

“We’ve all been humbled,” Miller said. “Sometimes in life, not everything is warm and fuzzy. So now, we’ll go back to work. We don’t have that margin for error like we did in the spring, so we just have to clean up a lot of the details and fundamentals, our decision-making.”

Miller, who knows a thing or two about winning state titles, said the Timberwolves have the look of a team that could be the last one standing come December.

“That’s what a championship group looks like,” Miller said. “They’ve got two really good quarterbacks, talented athletes all over the field, and they’re big. They look the part.”

Despite the lopsided defeat, however, fans should know better than to count out the Lions.

“It’s only one week. We’ve still got a long season to go,” said senior linebacker Zeke Viuhkola, who forced the first fumble that Earl Ingle returned 60 yards for a score and returned the second fumble 34 yards to give West Linn a 14-7 lead.

“This was definitely a wakeup call. That’s a really good team over there. We’ve just got to learn from this, and hopefully we can build some toughness from this moving forward.”

‘We showed them what’s up with our Tualatin team.’ Timberwolves defense answers the bell, posts ‘shutout’ of typically high-scoring West Linn