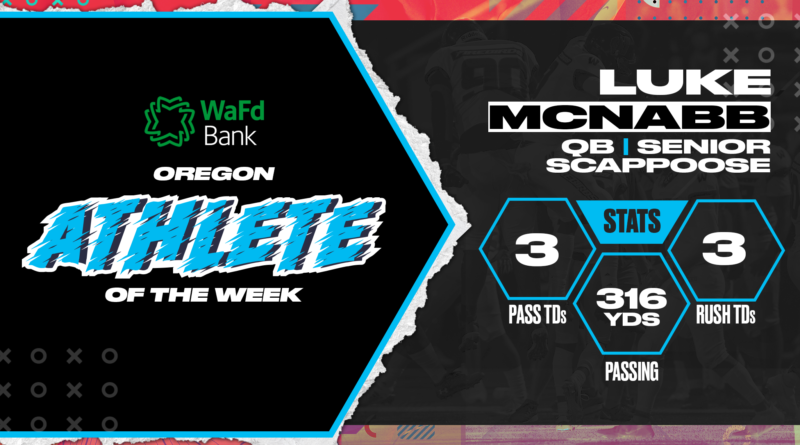 The senior passed for three touchdowns and a season-high 316 yards in a 52-41 loss to Wilsonville. He rushed for three more touchdowns, setting a career-high by accounting for six touchdowns. (story, photos)

McNabb received 31.59% of the vote, beating out La Salle Prep girls soccer’s Emelia Warta who finished second with 27.47%. Centennial’s Haiden Taylor finished third with 15.55% and Canby’s Tyler Konold finished fourth with 8.35%. There were over 36,000 votes tallied this week!

Kenneth Bae, Lincoln boys soccer: Bae headed home a free kick from the top of the penalty area midway through the second half for his second goal of the season, lifting the Cardinals to a 1-0 victory over Wilsonville. (story)

Karson Boschma, Tigard football: Boschma had a touchdown catch and came up with the game-sealing interception with about a minute left, helping Tigard hold on for a 27-23 win over Newberg.

Alex Briseno, Silverton football: Briseno, a backup who entered with fewer than 10 carries all season, ran 15 times for 141 yards and three touchdowns to help lift the Foxes to a 42-7 victory over Dallas.

Bryce Dyer, North Medford football: Dyer caught two touchdown passes and made two interceptions — including a clinching takeaway at the goal line with less than 30 seconds left — as the Black Tornado fought off Liberty for a 31-27 win. Dyer piled up 123 yards on six catches.

Danny Johnson, Lakeridge football: The backup quarterback got the start in place of Ryan Oliver (injury/illness) and led the Pacers to a 30-7 win over South Medford. Among his highlights was a 65-yard touchdown pass to Joey Olsen.

Blake Lewis, Cascade football: Lewis had 14 carries for 210 yards and four touchdowns for the Cougars, who defeated Tillamook, 62-20.

Caleb Paler, Mountainside football: Paler rushed for 175 yards and a touchdown in the Mavericks’ 28-14 win over Sherwood.

Jeffery Rogers, Sherwood boys cross country:Rogers finished second in the elite Danner Boys race (No. 1 among Oregon runners) at the Nike Portland XC with a time of 14:59.1. (photos)

Zack Schlottmann, Glencoe football: Schlottmann had seven catches — some of them highlight-reel quality — for 143 yards and a touchdown in the Crimson Tide’s 28-7 win over Reynolds.

Haiden Taylor, Centennial football: With the help of a stellar offensive line, Taylor racked up 205 yards rushing — including a 98-yard run — in the Eagles’ 34-21 win over rival Gresham.

Jack Wagner, Tualatin football: In his second game starting in place of injured star quarterback Jackson Jones, Wagner completed 16 of 19 passes for 247 yards and rushed for 81 yards. He accounted for two touchdowns as the Timberwolves cruised past West Salem for a 41-7 victory. (story, photos)

Emelia Warta, La Salle Prep girls soccer: Warta had two goals and an assist as the 5A Falcons stunned Bend for a 3-2 win, improving to 6-0 overall and 4-0 against 6A opponents. (story, photos)

Jaxon Watson, South Salem football: Watson caught a touchdown pass in the second quarter and returned a fumble 70 yards in the fourth quarter for the Saxons’ final score in their 42-35 victory over Mountain View.