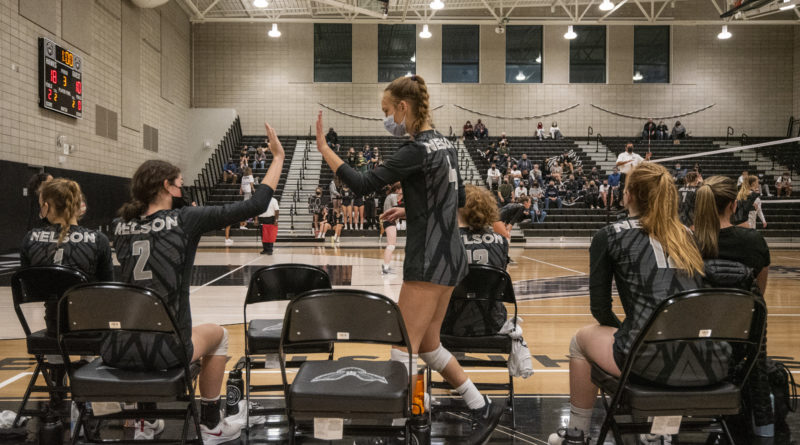 HAPPY VALLEY — The new kid on the block is supposed to take some lumps before settling into a measure of success. The Nelson volleyball program did not get that memo.

The Mt. Hood Conference has a storied tradition when it comes to volleyball, crowning more big-school champions than any other league in the state. It hasn’t taken the Hawks long to show that they are a good fit.

Head coach Lisa McBee followed the migration to Nelson from Clackamas, where she had been head coach since 2017 and an assistant for several years previously.

“I was at Clackamas a long time, and they were really good to me,” McBee said.

“But this was an opportunity to set a tradition — to start a program from the beginning.”

She also mentioned the draw of getting to work with Nelson athletic director Vicki Nelms.

Clackamas seniors were given the choice whether to finish as a Cavalier or make the move to the new school. A tight-knit group of three seniors elected to switch schools, giving the upstart Hawks an influx of experience.

“There were friends who I had been playing club with forever, and they had to move schools,” said middle blocker Ava Sciulli. “I wanted to have a fun time with them in my last year.”

“I wanted to keep playing with the girls I grew up with. I knew we would have great chemistry, and I would feel supported,” added libero Avery Bergers. “We are all good friends on and off the court, and that transfers to how we play.”

That team bond showed signs of promise right from the beginning of the season. The volleyball team earned the first win in the school’s history with a three-set sweep at Sandy in its season opener.

“I was watching the things that happen in between plays, when they weren’t attacking the ball. I saw their synergy, and I was like, ‘Oh yeah!’” McBee said. “They are all determined and focused, but it’s how they value each other. They really connect, and that is a beautiful thing to watch.”

A few weeks later, the Hawks held their own as part of an elite field at a tournament hosted by Central Catholic. Nelson split four matches, knocking off Mountainside and Summit — teams that reached the 6A tournament in 2019.

“I think we’re surprising some people,” Bergers said. “Teams still aren’t sure who we are or what to expect from us.”

Nelson’s marquee victory came in a five-set comeback win over Gresham, historically one of the most decorated programs in the conference. The Gophers took the first two sets on their home floor only to see Nelson respond by claiming the final three games, outscoring their opponent 65-51 down the stretch.

“It came down to not wanting to have to tell people that we lost,” Nelson junior outside hitter Kalista Lukovich said. “We know how to play; we just had to calm down and come back.”

“It took us a minute in that fifth set, but once we started getting points and keeping a lead, it made us more confident,” Sciulli said.

And the wins have kept coming.

The Hawks enter this week 9-1 in league play, holding the inside track for a second-place finish in their inaugural season. Nelson’s only setback came against perennial 6A contender Central Catholic — those teams meet again at 6:30 p.m. Monday at Nelson.

“It’s good to see where you are at, but you can’t get too far ahead of yourself. You still have to put in the work to get to your goals,” McBee said. “We serve really tough, and we have some pretty talented hitters. But it really comes down to that all-out hustle. They really have that drive.”

The Hawks use a rotation that goes more than 10 deep, getting contributions from a whole mix of players. Lukovich, a 6-foot-1 outside hitter, is a focus in the front row, bringing a big swing often from the left side.

“We are working on a high simple set that gives us consistency, and it makes it easier for me to see the block,” Lukovich said.

Sophomore Ava Maciag is another who plays above the net in the middle, while Kaylie Christopher and Maddy Abraham also are solid finishers up front, with Sciulli bringing a left-handed presence to the attack.

“I know when the ball gets pushed the other way, we have people who can do the job and get the ball down,” Lukovich said.

Of their nine league wins, six have come by way of a sweep. That includes the Hawks’ most recent decision — a 25-21, 25-10, 25-13 home win over Sandy that had the student section on its feet shouting cheers and holding up homemade signs.

“I really like to cheer on the varsity and get them hyped up — we’re a new school, so that’s important,” said junior Sicily Hitchcock, a player on the Hawks’ JV squad. “We want them to know that the rest of the school is behind them.”

Players also have noticed a special buzz on game days when they wear their jerseys to class.

“The teachers will ask us about the match and get excited about it — that gives us a boost,” Bergers said.

The Hawks are just outside the top 10 in the OSAA rankings and need just a few more wins to lock up one of the MHC’s three automatic playoff berths.

“As a new school, you start with nothing, and now to be on to the playoffs — that would be pretty cool,” said senior setter Ellie Wallace.

The wins are piling up in a historic season for the Hawks, as this first class of volleyball players build the foundation for fantastic seasons in the future.

“One of the most exciting things is seeing the girls take ownership in that culture they are building,” McBee said. “I enjoy watching them take the lead in establishing what they want to see happen here.”