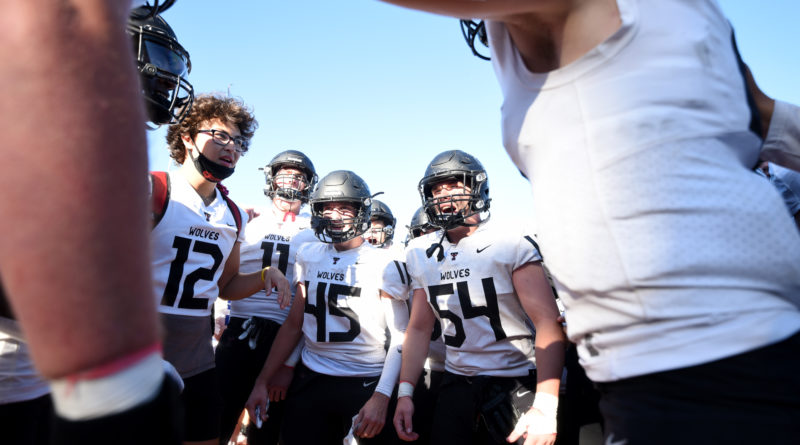 As the final horn sounded, and as the Tualatin football team began celebrating, the scoreboard at Wilsonville High School read Tualatin 49, West Linn 14.

But the Tualatin defense read it totally differently.

The Timberwolves are calling it a shutout — and, maybe, rightfully so.

Tualatin, with a dominant performance on defense, held the West Linn offense without a point, as both of the Lions’ touchdowns came on fumble returns by the West Linn defense, during the Three Rivers League-opening showdown played under warm, sunny skies Saturday.

“We look at this as a shutout,” said Tualatin junior linebacker Will Wilson, who had a sack and two other tackles for loss. “Yeah, our defense, I’m so proud of us. We did great. Every big play that happened, I knew we’d be OK, and I trust all my teammates that we’re going to step up the next play and shut them down.”

“Oh yeah, this is a shutout, completely,” said Tualatin junior defensive end Richie Anderson, who had a fumble recovery. “Our offense struggled on a couple of plays, but that’s OK. We came back on defense and shut them out. We showed them what’s up with our Tualatin team.”

“Oh, for sure, this was a shutout,” said Tualatin senior defensive back Kellen Hale, who had two interceptions. “This was a big step up for our defense. It was a big turning point. We had a shutout against Aloha (a 43-0 road win Sept. 17), and last week, our varsity defense had a shutout (a 41-7 home victory over West Salem), so we’re just putting our name at the top.”

With the win, the Timberwolves improved to 5-0. West Linn moved to 4-1.

The Lions were averaging 29.5 points per game through four games, but they found the going a lot tougher against the Tualatin defense. West Linn had 283 yards of total offense on 46 plays, with 68 of those yards coming on the final play. And, as the Timberwolves will point out, the Lions’ offense didn’t put any points on the scoreboard.

“It’s a shutout. A shutout, yes,” said Tualatin senior defensive back Cole Prusia, who had three receiving touchdowns on offense in addition to shining on defense. “Oh my gosh, the defense was huge. Sure, the offense did some things, but the defense really came together as a team. Turnovers, sacks, tackles for losses, pass breakups — everything was there. It was awesome.”

For the Timberwolves, it certainly was.

Tualatin seemed to come through on defense throughout the game. A third-down sack for a 12-yard loss by senior lineman Brandon Chin helped set up a 24-yard touchdown pass from senior quarterback Jackson Jones to Hale, giving the Timberwolves their first lead, at 21-14, with 5 minutes and 10 seconds left in the second quarter.

West Linn, in the opening possession of the third quarter, tried to battle back, steadily moving the ball. The Lions, getting a 42-yard pass from senior quarterback Chase Harmon to sophomore receiver Wiley Donnerberg, had a first-and-goal situation at the Tualatin 3-yard line.

On the next play after the big pass, Wilson tackled West Linn junior Earl Ingle for a 3-yard loss. Two false start penalties, a 3-yard pass and an incomplete pass left the Lions facing fourth-and-goal at the Timberwolves 13. On fourth down, Noland knocked a pass away from West Linn junior receiver Mark Hamper in the end zone, keeping the “shutout” intact.

From there, the Tualatin defense kept coming up with opportunity-creating plays, and the Timberwolves’ offense took advantage of them.

Early in the fourth quarter, Hale came up with his second interception of the game.

“I watched a lot of film. I knew where they were going to throw,” Hale said. “I just read the quarterback’s eyes, I kind of lurked, and then I just jumped up and got it.”

Two plays after that turnover, Jones threw a 25-yard touchdown pass to senior receiver Peter Burke, wrapping up the scoring in the Timberwolves’ 49-14 victory.

“We just flew around,” Hale said. “We knew their weaknesses, and we took advantage of them, and we got back to their quarterback and forced some bad decisions. That gave us the ball, and our offense took it down and scored.”

The Tualatin defense forced another turnover when Interian sacked Harmon, forcing a fumble that Anderson recovered.

Also for the Tualatin defense, sophomore Ryder Jones had a sack and Chin had a tackle for a loss.

“We’re just physical. We fly around every play, and we don’t mess up a lot,” Wilson said of the Tualatin defense. “I think that’s the key to us having a great defense and shutting teams down. This is a great West Linn team, and to shut them out on defense, I just loved every second of it.”

“We can do anything. We can cover, we can rush, we can blitz, we can get interceptions. I don’t think there’s a thing this defense can’t do,” Anderson said. “Our pass rush, on both the inside and outside, is great, and we have corners who can guard anyone. If we can get to the quarterback and help them out, that’s what we want to do.”

“It says a lot,” Prusia said. “We’re an offensive team, but we can really shoot the guns on defense.”

That Tualatin defense will face another prime challenge next week, as the Timberwolves will play unbeaten Lake Oswego on Oct. 8 at Tualatin High School.

Coming off the impressive win over West Linn, the Timberwolves surely must feel like they’re ready for anything.

“We just showed that we’re No. 1,” Hale said. “This is the most fun I’ve had in a long, long time. It was great beating West Linn.”

“We showed that we’re not scared of anyone. We can play anybody. We can do what we want. We can scheme. There’s no one that’s going to beat us,” Anderson said. “This was so much fun. They’re a great team, and to play against great players and still do good — that’s what it’s all about.”