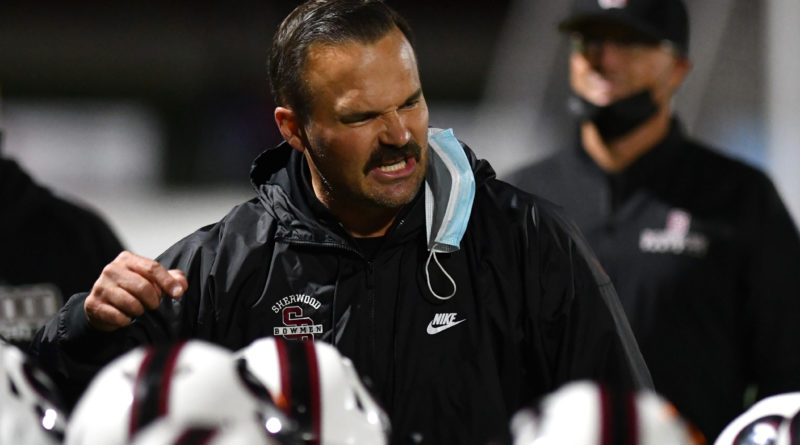 The Sherwood players had seen the chatter on social media all week leading up to their Pacific Conference opener Friday night against Newberg.

Sherwood coach Kevin Hastin left the Tigers over the summer to switch sides in the Highway 99W rivalry, and the Bowmen couldn’t help but read the posts from his former players.

“They were pretty pissed off,” senior running back Seth Glenn said. “They had revenge on their mind.”

But the Bowmen denied their rivals the revenge they sought, with Glenn delivering the decisive blow with a 17-yard touchdown run with 25.5 seconds remaining to lift the hosts to a 23-17 victory.

“We won this game for him,” said sophomore Keaton Fried, who pressured Levi Durrell into a hurried pass on the final play to spark a frenzied celebration. “We did it for Coach Hastin.”

When Hastin heard what his players said, it left him a bit touched.

“It means they’ve got my back,” he said, his voice catching slightly. “They laid it all out on the field tonight. Both sides of the ball just poured their hearts out, and the Bowmen came through in the end.

“I mean, it means a lot that we were able to beat Newberg. We know the players on the other side of the ball, and we have a lot of respect for them, a lot of love for them. It was a hard-fought game all night and a good football game.”

Besides the backstory of Hastin’s move from Newberg to Sherwood, there also was the matter of Friday’s conference opener matching 0-4 teams that believe they’re much better than their records indicate.

“This game was seen as for the league title almost,” Fried said. “Newberg is the best team in our division, so to come out and beat them is big.”

The Bowmen felt that after losing a couple of games to unbeatens Lake Oswego and Lakeridge, they’d let a couple of winnable games slip away. They also felt the sting of losing last spring’s game to Newberg, 14-9, and didn’t want to lose again to their rivals.

“We went into that game last year and didn’t think it was that big of a deal,” Glenn said. “But that loss empowered us for the rest of the season.”

The Bowmen finished the spring 5-1, as did the Tigers, so even with their 0-4 starts, there was no lack of confidence on either sideline.

“These are the best two teams in our league right now, so I felt like that was our league championship right there,” Glenn said. “That’s what we’ve been talking about all week. So, going forward now, we’re just going to win league and go on to the playoffs.”

The Tigers suffered their fourth loss of six points or fewer this season.

“It’s really frustrating,” said senior safety Gavin Korkeakoski, who had eight tackles. “We’ve just got to come out and play football and forget what happened last year. It’s history. We need to look forward to beating the rest of the teams in the league and make a good playoff run.”

To do that, Korkeakoski said, means making plays in the final quarter. Friday’s loss was the third in which the Tigers gave up the lead in the fourth quarter or overtime.

“We’re just not finishing games like we should be,” he said. “We’re fighting hard for all four quarters, but we need to dig deep in the fourth and find something that we haven’t found yet.”

The Bowmen were known for the wing-T they ran under Hastin’s predecessor, Greg Lawrence, and Hastin also ran the run-heavy offense during his tenure at Newberg.

But on this night, they turned to their passing game, showcasing senior receiver Cody Hall, who caught a school-record 14 passes for 176 yards and two touchdowns.

Hall had been hampered by injury during the first month of the season, and Hastin said this was the first week he didn’t play with a limp.

“We’ve missed his speed, and he really turned it on tonight,” Hastin said. “He was a game-changer. I’m really proud of him.”

Hall’s second score, a 7-yard fade to the right corner where he did a toe-tap to get his feet down before heading out of bounds, put Sherwood up 17-10 early in the first quarter.

He then made a heads-up play as the Tigers appeared ready to tie the score on their next possession, scooping a live ball on a backward pass and racing 71 yards before getting stopped at the Newberg 10.

“That turnover affected us,” Tigers coach Jeremy Johnson said. “We weren’t able to score there when we had a chance.”

The Tigers’ defense rose to the occasion, though, forcing Sherwood into a missed field-goal attempt. Newberg promptly drove for the tying score, going 80 yards in 10 plays, with Hudson Davis’ second touchdown, on a bruising 15-yard run over right tackle, knotting the score at 17-17 with 10:46 to play.

Sherwood drove to the Newberg 25 before turning the ball over on downs, then forced a three-and-out to get the ball back near midfield with 2:42 left.

The Bowmen converted on fourth-and-1. Facing third down from the 17, they sprang a misdirection play straight out of the wing-T playbook, with Glenn bursting through a big hole on the left side and extending the ball toward the goal line as he got into the clear.

“That was a great team effort there,” Glenn said. “The whole game, we’d been running power to the left side, but this time, we caught them off guard.”

Newberg still had a chance, getting the ball back at its 38. After Fried sacked Durrell on first down, the senior hit Davis for 28 yards on a screen pass, with a personal foul tacking on 15 more yards.

Durrell then found Cameron Buck on a short out to set up one final chance from the Bowmen 23, but Fried came off the left side untouched and forced Durrell to throw off his back foot, with the ball landing harmlessly at the 10 as the Sherwood players began their celebration.

“We knew they were a really good team, and the coaches were saying all week how they’re even to us,” Fried said. “But we came out and showed them who’s boss, you know? We punched them in the mouth.”