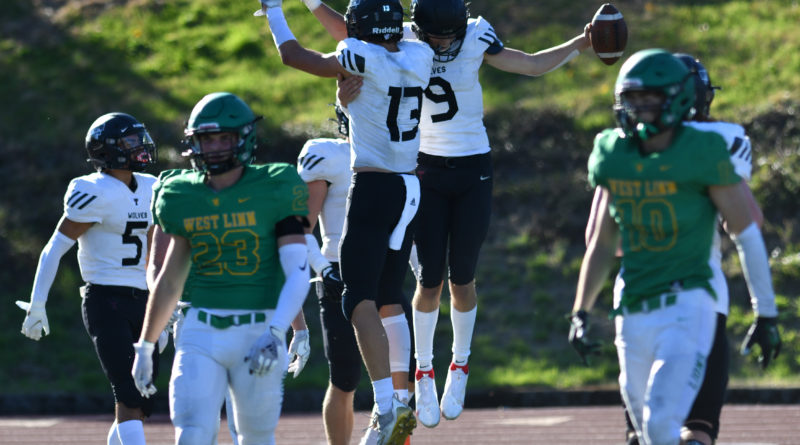 To be a Tualatin football supporter the past couple of years meant enduring a big tease.

The Timberwolves always had plenty of talent, but they always seemed to come up short in the big games.

Take their series against Three Rivers League rival West Linn. The Lions had won seven in a row against Tualatin since the Timberwolves joined the league in 2014, and fifth-year coach Dan Lever could recall each one since he’d come on board in 2017.

“My first year, it was a two-score ballgame, and we had a very solid team, but it was year one, and we were so basic,” Lever said. “Then the following three, we go into those games with our heads pretty big, and we had terrible weeks of practice. I’m talking stop practice and go home bad.”

Coming into Saturday’s 1-vs-2 showdown with the Lions at Wilsonville’s Randall Stadium, the Timberwolves again had a terrible Tuesday of practice, but unlike previous years, they rebounded with what senior Cole Prusia called “one of the best weeks of practice we’ve had all season.”

The result was the Timberwolves earning their first victory over the Lions since 2005, romping to a 49-14 win that finished with a running clock after Tualatin scored 42 unanswered points and kept West Linn’s offense off the scoreboard.

“This was a statement game, not for us, but just the whole state of Oregon,” Prusia said. “Because everybody’s thinking West Linn’s the best, West Linn has always been the best, but that was not the case today.”

When asked the difference in this year’s team from previous seasons, Prusia summed it up to one factor.

“Our team chemistry is there,” said the reigning Gatorade state player of the year, who caught eight passes for 194 yards and three touchdowns. “We’re doing things off the field, after practice, and we’re all bonding together. I think the chemistry is really what was missing a few years ago, but we have it now.”

Another difference? A suffocating defense that forced four turnovers Saturday and has allowed one touchdown over its past 12 quarters.

“I think we can do it all,” said junior defensive end Richie Anderson. “We can cover the best guys in the state, and we can rush the best tacklers. We can blitz. I … think there’s nothing we can’t do, to be honest with you.”

Saturday’s defeat marked the first time since Week 6 of the 2017 season that West Linn was held without an offensive touchdown. Both Lions touchdowns came on fumble returns in the first quarter.

“It’s only one week. We’ve still got a long season to go,” said senior linebacker Zeke Viuhkola, who forced the first fumble that Earl Ingle returned 60 yards for a score and returned the second 34 yards to give West Linn a 14-7 lead.

“This was definitely a wakeup call,” he continued. “That’s a really good team over there. We’ve just got to learn from this, and hopefully we can build some toughness from this moving forward.”

The Timberwolves welcomed back senior quarterback Jackson Jones, who missed the previous 2½ games with a right (throwing) shoulder injury.

“It feels amazing,” Jones said. “I was going to PT two, three times a week, just trying to get back for this game, to get back out here to beat West Linn for the first time in most of our lives, so it feels great.”

He overcame his two first-quarter fumbles to throw for 377 yards and four touchdowns, the last a 25-yarder to Peter Burke with 11:12 remaining to trigger the running clock.

Junior Jack Wagner, who capably took over in Jones’ absence, also received time under center, throwing for a touchdown and running for a score.

Could Jones have imagined handing the Lions their worst defeat since a 42-7 loss to Central Catholic in the 2014 Class 6A quarterfinals?

“In film, we saw some points that we could attack them,” Jones said. “So, yeah, I feel like this is what we should have done, and this is what we’re going to do every week.”

The Timberwolves quickly answered Viuhkola’s touchdown, with Malik Ross bursting 25 yards to tie the score at 14-14 with 11:15 before halftime. Jones then hit on touchdown passes of 24 yards to Kellen Hale and 42 yards to Prusia to give Tualatin a 28-14 halftime lead.

The Lions had a chance to claw back into the game to start the second half, with a long completion setting them up at the Tualatin 3. From there, a tackle for loss by Anderson and a couple of false start penalties eventually led to a fourth-down incompletion in the end zone.

On the ensuing possession, Prusia turned a short pass in the left flat into a 62-yard score, and the rout was officially on.

“That’s what a championship group looks like,” Lions coach Chris Miller said. “They’ve got two really good quarterbacks, talented athletes all over the field, and they’re big. They look the part.”

Miller then recounted some of the blowout losses he’d experienced during his playing career as a quarterback at the University of Oregon and with three teams in 10 NFL seasons.

“We’ve all been humbled,” he said. “Sometimes in life, not everything is warm and fuzzy. So now, we’ll go back to work. We don’t have that margin for error like we did in the spring, so we just have to clean up a lot of the details and fundamentals, our decision-making.

“But you know what? It’ll be fun to go back to work and work hard. We’ll see how we respond and if we can get a W against Lakeridge — 5-1 after six games with this group, 15 new starters, that’d be good.”

The Timberwolves, meanwhile, get another big test next week against a Lake Oswego team that improved to 5-0 with a shutout of Tigard to open TRL play.

“The TRL in my opinion is the most difficult league to play in the state,” Prusia said. “We played West Linn today, and we get LO next week and then we get Lakeridge. But we’re focused on LO now because they are a heck of a football team, and we’re hoping to do the same thing we did today.”