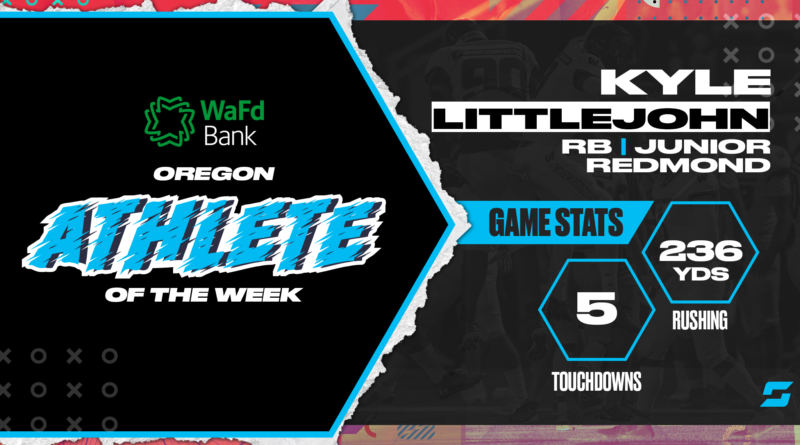 Congratulations to Redmond running back Kyle Littlejohn for being voted SBLive’s WaFd Bank Oregon High School Athlete of the Week for Sep. 13-19!

The junior rushed for 236 yards and five touchdowns in the Panthers’ 76-12 victory against The Dalles.

Littlejohn received 43.78% of the vote, beating out Sandy’s Leithan Thompson who finished second with 29.52%. David Douglas’ Jaden Poulshock finished third with 11.13% and Beaverton’s Hunter Borter finished fourth with 10.58%. There were over 29,000 votes tallied this week!

Bryan Blank, McMinnville football: Blank kicked three second-half field goals — including the game-winner from 19 yards — to send the Grizzlies to a 23-21 win over Oregon City.

Hunter Borter, Beaverton football: Borter completed 24 of 28 passes for 378 yards and five touchdowns in the Beavers’ 50-49 loss to Glencoe.

Brayden Burton, Lebanon football: Burton had 14 carries for 194 yards and three touchdowns, including an 85-yard scoring run down the sideline that cemented Lebanon’s 32-21 win over Central.

Darrius Clemons, Westview football: Clemons had five catches for 138 yards and three touchdowns in the Wildcats’ 55-7 rout of Century.

Royce Fasel, Glencoe football: Fasel’s fifth rushing touchdown, a three-yard score with 14 seconds left, and ensuing conversion pass powered the Crimson Tide to a thrilling 50-49 win over Beaverton. Fasel carried 31 times for 241 yards. He was 10 of 14 for 142 yards passing, with one touchdown and two interceptions.

Konner Grant, Tigard football: Grant ran the ball 24 times for 180 yards and three touchdowns as the Tigers posted their first win of the 2021 fall season, 30-13 over Mountainside.

Trenton Hughes, Hood River Valley football: Hughes factored in all four of the Eagles’ touchdowns (three passing, one rushing) and batted away a pass on a two-point conversion try in overtime to preserve a 27-26 win over Ridgeview.

Caleb Lakeman, Tualatin boys cross country:Lakeman set a personal record at the Meriwether Classic — 14:50.5, a top-five time in the country.

Sam Leavitt, Westview football: Leavitt passed for five touchdowns — three to Darrius Clemons — to power the Wildcats to a 55-7 win over Century.

Colton Marsters, Roseburg football: Marsters ran for three touchdowns and connected with Landyn Dupper on a 60-yard scoring play to lead Roseburg to a 34-12 win over Southridge and a 3-0 start. He finished with 177 yards on 13 carries.

Jacob Newell, Thurston football: In the Colts’ first game of the season after a COVID pause, Newell had four catches for 137 yards and three touchdowns in a 58-0 win over Springfield.

Cru Newman, Central Catholic football: Newman threw for 320 yards and three touchdowns — including the game-winner to Jordan King in overtime — as the Rams traveled to Tumwater, Wash., and outlasted the Thunderbirds, 42-35.

Jaden Poulshock, David Douglas football: Poulshock rushed for 252 yards and one touchdown on 17 carries, had a touchdown catch and 88 yards receiving, and had an interception and eight tackles on defense for the Scots, who defeated Gresham 58-30.

Jake Reichle, Lakeridge football: Reichle ran for two touchdowns, caught a scoring pass and returned an interception for a touchdown to highlight the Pacers’ 42-13 win over Liberty.

Brock Thomas, Sheldon football: Thomas threw for three touchdowns, ran for two and caught a scoring pass for the Irish in their 42-28 win over Newberg. He has been responsible for 16 touchdowns through three games.

Leithan Thompson, Sandy football: Thompson scored both Sandy touchdowns — including an 83-yard catch-and-run play late in the fourth quarter — and intercepted a pass at the end to preserve the Pioneers’ lead in a 14-7 win over Barlow.

Jack Wagner, Tualatin football: Filling in for star quarterback Jackson Jones, who was sidelined with a shoulder issue, Wagner had four touchdown passes in the Timberwolves’ 43-0 rout of Aloha.

Sayre Williamson, Mountain View football: Williamson finished with 214 yards and three touchdowns on 24 carries in the Cougars’ 31-28 win over Sprague.

Johnny Withers, West Salem football: Withers had 18 carries for 164 yards and three touchdowns, helping the Titans fight off South Salem for a 36-28 victory.