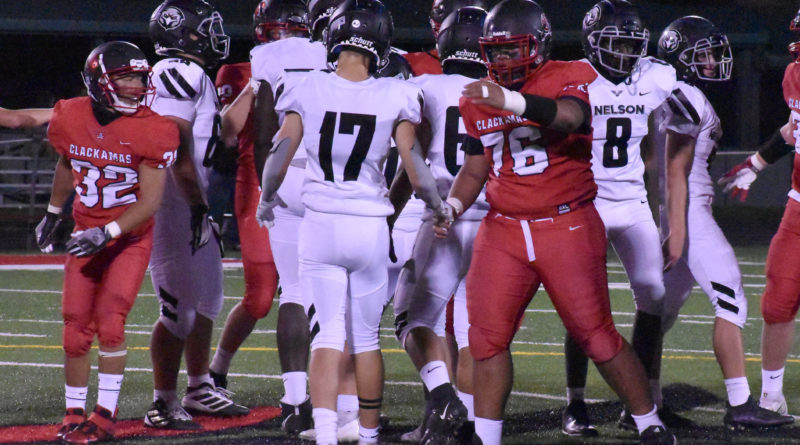 There were many reasons the crowd went five deep around the track for Friday’s early-season game at Clackamas High. The unbeaten Cavaliers are a contender for the big-school crown, and it was homecoming night.

Perhaps the biggest draw, though, was people wanting to be on hand for the historic first meeting between upstart Nelson High and established Clackamas — schools set just a few miles apart along Sunnyside Boulevard.

The first installment of this rivalry featured more pleasantries than trash talk. During pregame introductions, the public address announcer offered a ‘welcome to our friends from Happy Valley.’

Remember, last season these players were suiting up in the same colors.

“We want to play the game the right way. We want to win with class and lose with class,” Clackamas coach James Holan said. “Those guys on the other side are still a part of our family, and we are pulling for them.”

Clackamas senior lineman Logan Chastain pointed his fingers skyward as he led his team through an inflatable Cavaliers helmet and onto the field to start the night.

“It felt like being at the beginning of a piece of history,” Chastain said. “I expect this to be a big rivalry in a few years, and I’m glad to have been here when it started.”

As expected when matching a state contender against a new school with one senior on the roster, the game turned quickly as the Cavaliers cruised to a 52-0 victory.

Clackamas running back Luke Ash took the Cavaliers’ first play 37 yards to the end zone. He would add another score two drives later.

By the end of the first quarter, Clackamas was in charge, 28-0.

“This week we came with the intensity in practice — no mistakes,” Johnson-Gibson said.

Despite the lopsided numbers on the scoreboard, the game played through with sportsmanship and respect.

During the first quarter, Nelson quarterback Alex Nita got rid of a screen pass just as Chastain came crashing through to bury him into the turf. Chastain helped his opponent back to his feet, and the two playfully slapped helmets.

The pass went for a Hawks first down.

“I had to get a lick in on him, but Alex is a good guy, so I picked him up and told him good job and it was onto the next play,” Chastain said. “Honestly, it was really fun. It was like a scrimmage with my boys — we had a great time.”

Clackamas scored four more times in the second quarter, and fans started seeing unfamiliar numbers trot onto the field. The second-stringers were getting their chance under the lights.

All of the scoring came in the first half, as the Cavaliers took a 52-0 lead into the locker room.

The Hawks did reach the 1-yard line late in the second quarter only to see Clackamas’ Mateo Maehara intercept a pass in the end zone to keep the shutout.

The second half was played with a running clock, as set by OSAA mercy-rule guidelines.

“Our intensity didn’t change at all,” Clackamas sophomore Carter Wilcox said. “Off the field, the rivalry is all love. On the field, it’s aggressive and chaos.”

Wilcox was one of four quarterbacks the Cavaliers used on this night.

“The most exciting part was seeing our second string out there and everyone enjoying their time,” Johnson-Gibson said.

Clackamas improved to 4-0 heading to Friday’s game at David Douglas (3-1) — with the winner being the most likely candidate to challenge Central Catholic for this fall’s Mt. Hood Conference crown.

“Tonight it’s about us,” Clackamas coach James Holan said. “Whether you are first string starting the game or fourth string closing it out, we want to see us executing. Our goal is to go 1-0 every week, and we did that.”

Even the handshake line had a different feel with frequent stops to embrace a friendly face from the other side.

Johnson-Gibson made sure to find Nelson receiver Reid Gray, who missed out on the action while recovering from a hip injury. The two stepped away from the crowd and Johnson-Gibson offered some encouragement to the player who used to help him prepare during the week of practice.

“Last year, he was on scout team and we’d go against each other and always had a fun time,” Johnson-Gibson said. “I try to be a mentor, a big brother, to him.”

Long after the teams ended their postgame talks, players lingered around the field, some in Cavaliers red and others in road whites, laughing, sharing stories and catching up on a new school year spent in different buildings.