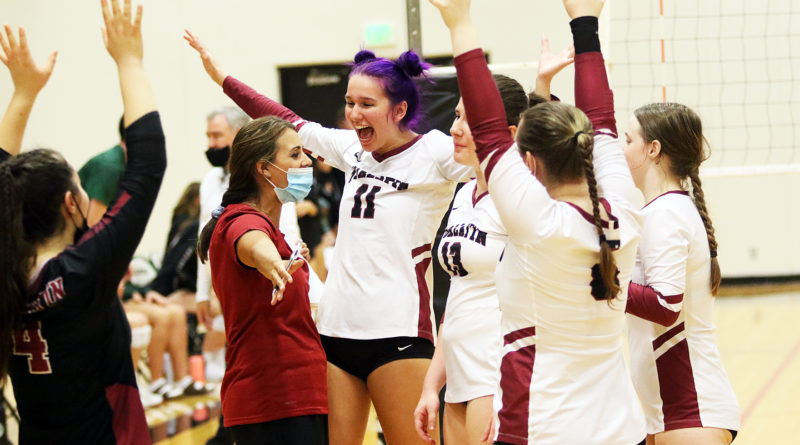 It might be an understatement to say the Tualatin volleyball team was motivated.

After all, the Tualatin squad wanted to play well to help their head coach, Tiffany Zwick, celebrate her birthday. And, if the Timberwolves needed even more motivation than that, all they had to do was look across the net to the other side of the court.

That’s where they saw their rivals from Tigard.

Fueled by all that motivation, the fired-up Tualatin team ran to an impressive 25-17 25-14, 25-21 win over the rival Tigers in a Three Rivers League match Thursday at Tualatin High School.

“It was definitely motivation,” Tualatin senior Sophie Biehler said of playing on Zwick’s birthday. “And, also, the big rivalry game. That’s always motivation for us. Oh yeah, it’s extra motivation playing Tigard. They’re our rivals, and we want to go out in every game and win and put out the best effort as possible. And we did that tonight. It was really great to see everyone play their hardest.”

“We had to play for her. It was her birthday wish,” Tualatin junior setter Sophie Fast said of Zwick. “We came in really excited for this game. They’re our rivals, and it’s the most fun game of the year, so we were ready.”

With the win, Tualatin evened its Three Rivers League record at 3-3 (4-6 overall), putting the Timberwolves in a tie with Lake Oswego and Lakeridge for third place in the league standings.

“This is so big, especially since we have six seniors on varsity,” Tualatin senior right side Josie Phillips said. “We were all pumped for this game, and it’s the last time we’re playing Tigard on our home court. So, we were just ready to do this and to come out strong and sweep them in three. We were so excited.”

“It’s a big win,” Fast said. “Beating Tigard, our rivals, is such a big goal every year, so this was really fun. If you lose, it’s not good.”

With the setback, Tigard moved to 0-6 in TRL play (0-8 overall), leaving the Tigers in eighth place in the league standings.

“I think that Tualatin played real well. They were good,” Tigard senior outside hitter Anna Follett said. “We made some little adjustments for them, and we still tried to keep figuring it out. We didn’t play the game we normally do. We had some hesitating, and we didn’t play as aggressive as we normally do, so that was a little frustrating, but I’ll give it to Tualatin. They played really good tonight.”

Tigard, like Tualatin, seemed to be fired up right from the start of the rivalry showdown. The Tigers, getting back-to-back kills from sophomore Helayna Sy and Follett, grabbed a quick 2-0 lead in the first set.

But Tualatin came storming back — in a big way. The Timberwolves took a 5-3 lead on an ace serve by junior libero Andie Valdes. That ignited a 4-0 run, which included a block by Fast and a kill by senior Stella Fetherston, coming off a set by Fast, which upped the Tualatin lead to 8-3.

“We were definitely ready,” Biehler said of the strong start. “We worked really hard in practice yesterday, and our coach was super great at showing us some specific drills so we could beat Tigard. It was a great game, and it was so great to see all the things we worked on in practice show up on the court.”

Tigard cut it to 16-13 following a kill by freshman Emma Fauth, but the Tigers wouldn’t get any closer. Tualatin, getting two kills and a block from Phillips and two blocks and a kill from Biehler, was able to pull away to get a 25-17 first-set victory.

The Timberwolves took charge again early in the second set. With Fast serving five consecutive points, including an ace to go with a kill by senior Mikayla Randels, Tualatin grabbed a quick 10-4 advantage.

Tigard tried to rally, getting a sideout kill by Follett, followed by back-to-back aces by Follett, to make it 12-9.

But, again, the Timberwolves responded.

Biehler came up with a sideout kill, and she followed by serving five straight points, including an ace on a jump serve, to increase the Tualatin lead to 23-14.

From there, a tip by Fast helped the Timberwolves close out a 25-14 second-set win.

But Tigard wasn’t about to go down without a fight.

“We had some good moments, but we just need to string them all together,” Follett said. “We’re still learning, but we’re there. We just need to execute a little more.”

Tualatin rallied to take the lead, 9-8, on a point on a serve by Phillips, and the Timberwolves fought off Tigard the rest of the way.

With Biehler and Phillips each having two kills, and with senior middle blocker Paige Lawton having a block and a kill, Tualatin opened a 17-14 lead.

Tigard, getting a kill by Frye and a point on a serve by Graham, closed within 18-16. But the Tigers wouldn’t get any closer.

With Biehler having two kills, both coming off sets by Fast, the Timberwolves notched a 25-21 third-set victory to wrap up the match.

“It was really good. We practiced so much on fundamentals, and it really paid off today,” Biehler said. “It was really fun. I try my best to work hard for all the girls on the court. They’re working hard, and I want to return the favor to them. Everyone is working super hard, and it’s paying off for us.”

“We had a lot of energy, and we were also very calm in everything we did. Everything we did was just calm and collected,” Fast said. “It was so much fun. The energy was great. The student section was humongous.”

“It was so fun. On the court, we were cheering after every point. Even when we weren’t serving or didn’t have the ball, we were still excited to work together, play together and be together,” Phillips said. “It’s our coach’s birthday, and this whole season, we’ve had so much excitement around it. Last season (the 2021 spring season) was a little weird, but we’re so excited to be together again and play teams like Tigard. I can’t even explain how happy and excited we are to be here.”

The Tigers also seemed to play with plenty of enthusiasm.

“I was ready to go. It’s my last time playing Tualatin here, so I was ready to go. I was pumped up. The energy was there. We’ve got it,” Follett said. “It was fun. Definitely, we wanted a different outcome, but there were some moments that we played really well, and I’ll remember that.”

The Tigers and Timberwolves will have their rivalry rematch Oct. 18 at Tigard High School.

“We had some nerves going — it’s our rival,” Follett said. “But we get to play them again, and it will be our Senior Night, so I’m ready.”