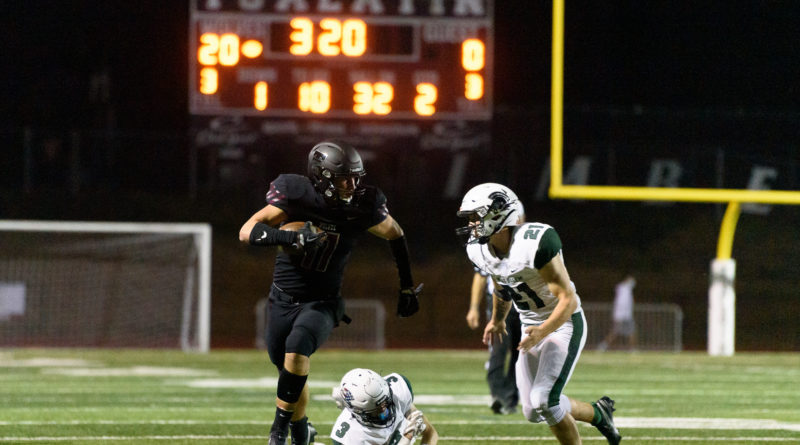 TUALATIN — Sure, Tualatin’s 41-7 rout of West Salem was another quick notch in the win column.

And another dominant showing on both sides of the ball by the Timberwolves, who are ranked No. 1 in the SBLive Oregon Class 6A media poll.

It was such an overwhelming performance in Friday’s nonleague contest that it left West Salem coach Shawn Stanley feeling a bit defeated.

A huge reason was Ross, who rushed for 72 yards on just 12 carries. The 6-foot, 190-pounder scored touchdowns in each of the first three quarters, including on two 13-yard runs in the first half and a 3-yard run to cap his night in the third.

“Honestly, it feels really good,” Ross said. “It was a great team effort. We played well together and we had a pretty good week of practice, so everything paid off.”

Tualatin junior quarterback Jack Wagner continued his remarkable play since replacing senior starter Jackson Jones two weeks ago midway through a win over Silverton. Jones, a 3-star prospect and ranked the top senior quarterback in the state by 247Sports, has missed the past two-and-a-half games because of a shoulder injury.

The Timberwolves haven’t missed a beat behind Wagner, who showcased his skills as a passer and runner. The 6-foot-4 Wagner was efficient, completing 16 of 18 pass attempts for 225 yards and a touchdown. On the ground, he had five carries for a team-leading 77 yards, including a 13-yard touchdown run in the first half and a big 35-yard scamper in the third quarter to set up another score.

“He reminds me of a little Lamar Jackson,” Ross said of Wagner for his dual-threat playmaking ability. “He’s different. He can do it all. I think people don’t understand how hard it is to come in and try to live up to one of the best quarterbacks in the state and the hype. … He’s special. I can’t say enough about him. He’s a really good player.”

Wagner credits Jones for all the offseason work they did together to help prepare him for this moment. From teaching him how to read defenses to help with understanding terminology and coverages, Wagner said Jones’ help has been undeniable.

Since stepping in, Wagner passed for four touchdowns in last week’s win over Aloha. He scored another on the ground against Silverton.

When Jones does return, Wagner said he’s happy to return to his reserve role.

“(Jones) deserves it, too,” Wagner said. “He’s a great quarterback. He goes out there and plays well, so I won’t take any hard feelings. I’ll go back to doing what I do and help him out.”

Tualatin coach Dan Lever said Jones remains “week-to-week” and could have played if it were an emergency. He acknowledged that opponents might have to game plan for both quarterbacks in the future.

“I think they both can do things that help us win, and people are going to be forced to prepare for both,” Lever said. “Jones is definitely the starter, but Jack can do some things. Just what he does for our team … he’s our starting safety, starting punter, he’s our holder, he can kick. He can play QB, he can play receiver. He’s just a fun talent to have because he’s whatever we need him to be.”

“I’ll tell you what, if that’s their backup quarterback, I’m glad we didn’t play against their starter because he hardly missed any throws,” Stanley said. “He puts it on the money where guys can run with it.”

Tualatin senior Cole Prusia added a 20-yard touchdown run in the first quarter. Senior Griffin Biggs scored on an eight-yard reception just before halftime to give the Timberwolves a 34-0 lead.

West Salem (3-1) saw its win streak dating to the spring season snapped at nine games. Senior quarterback Brooks Ferguson was held in check, completing 6 of 15 attempts for 52 yards. He had nine carries for 34 yards and scored the team’s lone touchdown in the fourth quarter.

Stanley said he’s confident his team will bounce back

“Our kids worked hard, they busted their butt,” Stanley said. “That doesn’t always mean you’re going to win the game. That’s the reality in life, too. I’ve had times where I thought I deserved a job, and sometimes it doesn’t happen. What are you going to do about that?

“Knowing our kids, they’re going to respond and come out better next week.”

For Tualatin (4-0), senior Kellen Hale had 77 yards on one catch. Senior Peter Burke added three catches for 39 yards, senior Noah Ogoli had four receptions for 34 yards, and Prusia had two catches for 31 yards.

The Timberwolves now look ahead to Three Rivers League rival West Linn next week in one of the biggest regular-season games of the season. The Lions have dominated the matchup, having won the past seven meetings since 2014, including a 37-6 victory in the spring.

Lever said his team needs to play mistake-free football to have a chance.

“In the past, we had a bunch of turnovers, a bunch of penalties,” he said. “It was silly stuff that can be cleaned up, so I’m hoping we can play really clean and give us an opportunity to be successful.”

Ross said he and his teammates are “looking forward to (the game) a lot.”

“It’s a great test for us to see how we battle against one of the best teams in the state,” Ross said. “They’re ranked No. 1 (in the OSAA rankings), so obviously our goal is knock No. 1 off. It’s going to be a championship-type battle, so we’re excited.”