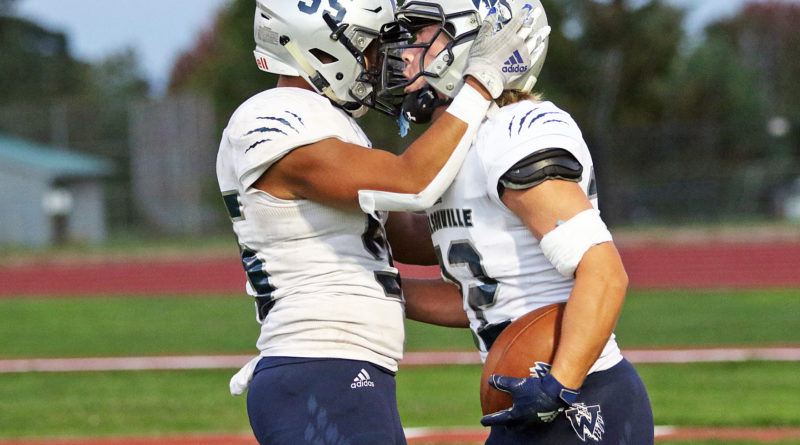 But, as it turned out, keeping that streak going was anything but easy — not even close.

The Wildcats, after jumping out to a super-quick 28-0 lead, had to fight off a furious Scappoose comeback attempt to get a thrilling 52-41 victory in a wild, back-and-forth Northwest Oregon Conference West game Friday at Scappoose High School.

“This is definitely a big one,” said Wilsonville senior quarterback Chase Hix, who had 306 yards of total offense while passing for two touchdowns and running in another. “They’re definitely a top team in 5A, and to come out here and have a battle, and get up early and have them battle back, it was a fun one. It was one of those games you dream of, going back and forth. It was awesome.”

“It was good, beating Scappoose,” said Wilsonville junior tight end/defensive end Tristan Davis, who had a touchdown catch. “They’re one of the top 5A teams, so we just wanted to come here and make a statement. I’ve never been in a game like this before.”

With the win, its 26th straight in conference play, Wilsonville, which is ranked No. 2 in the latest SBLive Class 5A media poll, moved to 2-0 in conference games and to 4-0 overall. What makes the Wildcats’ 4-0 start even more impressive is the fact that they graduated all but three starters from the revised 2021 spring season, when Wilsonville went 6-0.

“We’re a young team, but just seeing last year’s seniors, how they had just six games, that just motivates us,” Davis said. “We’ve got that on the board every day. We just think about them, and we had a really good team, and we’re just playing for them.”

“Tradition never graduates, as our coach (Adam Guenther) always says,” Hix said. “We graduated 19 starters from last year. It’s definitely hard to come back as a program, but, as our coach likes to say, we don’t rebuild, we reload, and we definitely have the guys to do that this year and make a run in the playoffs. I’m excited for this season. We’ve got a lot of talent.”

No. 9-ranked Scappoose, after seeing its amazing comeback effort come up just short, moved to 1-1 in conference play and to 2-2 overall.

“I think we started off weak, but we really battled back,” said Scappoose senior linebacker Austin Verbout, who had a fumble recovery. “I think if we could replay those first five or six minutes, then we win that ballgame. But that’s just something that we just game plan for, and play for, next week.”

Wilsonville got off to an absolute blazing start — in all three phases of the game.

The Wildcats’ defense, getting a sack by senior Donis Demonte, forced Scappoose into a quick three-and-out. Wilsonville senior Jack Johnson returned the ensuing punt 29 yards to the Scappoose 17-yard line.

Three plays later, Wildcats junior running back Jacob Ogden powered his way into the end zone from a yard out, giving Wilsonville a 7-0 lead with 9 minutes and 52 seconds to play in the first quarter.

The next Wilsonville drive lasted just one play but had the same result, as senior Rochne Beecham scored on a 26-yard run. The next Wildcats drive was also just one play — a 42-yard pass from Hix to junior receiver Cooper Hiday, making the score 21-0 with 7:05 left in the opening period.

The Wildcats weren’t done. The next time they had the ball, Hix capped a 10-play, 68-yard drive with an 18-yard touchdown toss to Davis.

“It was a perfectly designed play,” Davis said. “We saw the linebacker about to stunt. He read run, and I just found the open gap. Chase just threw me a great ball, and I caught it and scored a touchdown. It felt good. That was my first touchdown ever in football.”

“We were just ready from the jump,” Davis said of Wilsonville’s fast start. “We knew about Scappoose; we respect Scappoose. We knew we had to come out punching first.”

“We came out firing in the first quarter, on all cylinders,” Hix said. “But I think we got too relaxed too early. And they’re a good team, they’re a proud team, and they battled back for sure. We have to always expect the unexpected and play off of it.”

On the other side of the field, Scappoose found itself staring at an unexpected early 28-0 deficit. But the team wasn’t about to concede anything.

McNabb ignited the comeback with a 39-yard touchdown pass to senior receiving Colin Stoddard. Sophomore Megan Earl added the first of her five extra-point kicks, cutting the Wilsonville lead to 28-7 with 11:50 left in the second quarter.

“We noticed that they were playing down, so we could take some shots over the top,” McNabb said.  “Big plays always can change the outcomes of games. So, we started taking advantage of that, but it just wasn’t enough.”

Wilsonville responded with a 19-yard touchdown run by Beecham, upping its lead to 35-14 with 2:18 left in the second quarter.

Scappoose came storming right back. McNabb completed passes of 16 and 25 yards to Stoddard, setting up the quarterback’s 18-yard touchdown run, making the score 35-21 with 1:07 to go in the second quarter, which would turn out to be the score going to halftime.

“It was just a momentum-boost from our coaches, getting us riled up,” Verbout said of the rally. “And big No. 3 out there, Colin Stoddard, he’s a real team captain. He was just going crazy.”

Wilsonville, looking to slow the tempo in the second half, turned to its power running game. In the Wildcats’ first possession of the third quarter, that rush attack led to a 40-yard field goal by senior Joey Friedman, who also made all seven of his extra-point kicks, making the score 38-21 with 7:17 left in the third quarter.

The Wildcats increased the lead to 45-21 when Hix scored on a 22-yard scamper with 3:36 remaining in the period.

The teams then traded touchdowns. Scappoose got an 8-yard scoring run by McNabb. Wilsonville responded with a 4-yard touchdown run by junior Brennan Martin, giving the Wildcats a 52-28 lead with 10:31 remaining.

But even that lead wasn’t safe.

On the next play from scrimmage, McNabb and Stoddard hooked up on a 70-yard touchdown pass, making the score 52-35 with 10:10 to play.

But Wilsonville, behind its power running attack, featuring Martin, sophomore Jay Rummell-West and Hix — and with Hix also throwing a clutch 24-yard pass to senior Kellen Harford on a third-and-13 play — was able to eat the final 4:58 off the clock, wrapping up the hard-fought win for the Wildcats.

“This was awesome to come out here, in an away game, against one of the top teams in 5A, in one of those Friday Night Lights games you dream of, with perfect weather, a nice grass field, and just going back and forth,” Hix said. “It was awesome.”

Hix and McNabb engaged in a quarterback duel throughout the contest — a duel they both enjoyed.

“I’ve played against Luke in all sports. He’s a dog,” Hix said. “I love playing against that guy. I’ve been playing with him since freshman year. He’s a good player.”

“He’s a really good athlete, and a really nice guy, too,” McNabb said of Hix. “Yeah, definitely, it was motivation, going against one of the best QBs in 5A.”

Hix completed 15 of 27 pass attempts for 219 yards and two touchdowns with one interception. He ran for 87 yards on 13 carries.

Wilsonville rushed for 396 yards on 54 carries behind the offensive line of senior Keenan Sanford, Demonte, sophomore Mason Seal, senior Brock Arntson, senior Tim Phelps and senior Nick Cooper, among others. The Wildcats got 225 of their rushing yards in the second half.

Beecham led the Wilsonville rushing attack with 139 yards on 14 carries. Martin had 84 yards on 13 carries, and Rummell-West ran for 73 yards on nine carries.

Johnson led the Wildcats in receiving with four catches for 42 yards. Senior Carson Compton had two receptions for 31 yards. Nine other Wilsonville players had one catch apiece.

Davis, in addition to his touchdown catch, helped lead the way for the Wildcats on defense, having a sack and another tackle for a loss.

“I just came out, played hard, and did what I had to do,” Davis said. “I just wanted to make plays.”

Also for the Wilsonville defense, Demonte and Cooper each had a sack.

“You always want to get a win, but you always have to work on some things,” Davis said. “Our goal is to make it into the playoffs, and in order to get there, you have to execute everything.”

For Scappoose, McNabb completed 16 of 27 pass attempts for 316 yards with three touchdowns and no interceptions. He ran for a team-high 65 yards on 16 carries with three more touchdowns.

“I really wanted to win. I wanted to come back and win this,” McNabb said. “Our offensive line made some big holes, and I was able to take advantage of it.”

Stoddard had eight catches for 196 yards before leaving the game with an injury midway through the fourth quarter. Scappoose senior Malcolm Harrison added three receptions for 32 yards.

For the Indians’ defense, Verbout had three tackles for loss to go with his fumble recovery.

“That’s not just me. It’s my teammates, too,” Verbout said. “Trey Dieringer and Riley Gibson are big helps in that. Trey sets the edge really well, and Riley takes out two or three guys every play. They make it so I can get in that backfield and wreak havoc.”

Also for the Scappoose defense, junior Jonathan Clothier had an interception, and Dieringer had a tackle for a loss.

Now, the Indians are looking to build on their effort in Friday’s game.

“I think this says a lot about our team. We don’t just roll over and die. We battle back and fight to the bitter end, and that’s what we did tonight,” Verbout said. “It was a good learning experience. It was a fun game, and I learned a lot. It wasn’t fun to lose, but it was fun to learn.”

“It was definitely a lot of fun. It shows we can play with anyone, and it shows we have a lot of heart, too,” McNabb said. “If we started off a little better, I think we definitely would have had a shot to win. It took a little longer to realize that we could play with these guys.”