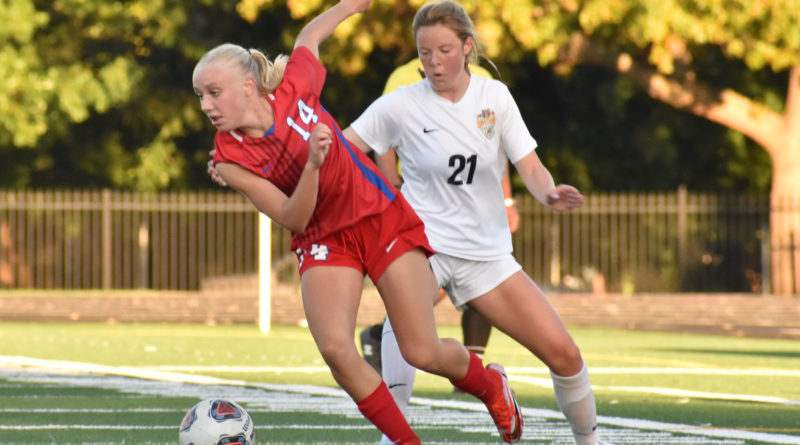 MILWAUKIE — The La Salle Prep girls soccer team found itself in uncharted territory, playing catchup most of the night before striking twice in the final minutes to surprise Bend 3-2 on Thursday night.

“It was our first time playing from behind, and it was a lot more stressful — it was a different feeling,” Falcons striker Emelia Warta said.

The visiting Lava Bears sent heavy traffic to the front of the goal early in the second half only to see La Salle Prep goalie Hannah Reddick scoop the ball out of danger — for the moment.

The Falcons were unable to clear the ball, and Bend came crashing in again.

This time striker Sydney Sventek played a give-and-go with Brianna Vidali-Rood in tight quarters before punching the ball into the back of the net to put Bend up 2-1.

La Salle Prep tried a similar strategy when Sydney Spotts and Gretchen Shea passed it back-and-forth to make a run down the left side only to have Spotts’ shot deflected wide of the goal.

Midway through the second half, the Falcons were awarded two free kicks from close range centered on the goal. Warta’s first blast hit the wall of defenders and was no threat, and her next attempt from near the same spot sailed over the cross bar.

The Falcons continued to chase the equalizer, keeping possession in the attacking zone for a steady 20 minutes. Natalie Pfleger made a run down the sideline that drew a loud cheer from the fans in the nearby grandstands before making a diagonal pass ahead for Shea, who was zipping down the center of the field. Bend goalie Alexa Fritz was quick to come off her line and intercepted the threat near the top of the box.

With less than 15 minutes to play, time was running out on the home squad.

But La Salle Prep was relentless.

Warta made four quick touches along the top of the 18-yard box before finding a window between defenders. Her low blast was on target, but Fritz was in position to scoop the attempt off the turf.

The next Falcons attack would pay off.

Warta sent the ball ahead to Spotts, who settled the ball along the right side about 15 yards out. Coming off the line to challenge, Fritz got tied up in traffic with one of her defenders. Spotts shifted to the center slightly and let loose with a low shot before another Lava Bears defender crashed the scene.

Tie score with 12 minutes to play.

“I’ve been skying the ball all year, so I told myself to relax and handle the pressure. The ball was right in front of me, and I knew I could take it,” Spotts said. “It felt really good to achieve something that I’ve been working on.”

La Salle Prep struck again with Warta finishing from about 12 yards for the winner with 7:01 on the clock.

“I took the ball inside and saw I had a really good angle toward the goal,” Warta said. “I saw the goalie cheating to the far side, so I placed it to the near post, and it was pure adrenaline after that.”

It was Bend pushing for an equalizer over the game’s final five minutes.

Kelsie Russell had the first opportunity, fending off a defender on the left side and hitting an off-balance shot that stayed wide of the near post. Teammate Jordan Welsh put a ball on target from 30 yards, but Reddick made a routine save in the center of the goal line.

“We just got tired,” Sventek said. “After being up most of the game, to go down a goal right at the end was hard, but we kept trying.”

Bend’s last chance was its best one.

Annika Evanitus carried the ball deep into the attacking zone before curving a ball inside for Russell, who was running full speed dead center at the goal. Reddick moved off her line and stepped in to take the ball with Russell just a stride away.

“There is a lot of decision making on the fly,” Reddick said. “It was one of the easiest balls to protect, but it was stressful because I knew the game was at a tipping point.”

Sventek put the Lava Bears in front less than 10 minutes into the match when she intercepted a La Salle Prep pass deep in the Falcons’ end and converted a 1-on-1 chance against the keeper.

“We definitely came in wanting to score first and set the tone for the game,” Sventek said. “We knew they were solid in the center, so we focused on playing out wide, passing the ball around and finishing chances calmly.”

La Salle Prep finished with a 6-3 edge in corner kicks with Warta cashing in on one with less than a minute to play in the first half to knot the score at 1-1.

“That definitely gave us energy and that spark to keep pushing,” Warta said.

“It’s great to keep winning,” Warta said. “We hold ourselves to a high standard and beating 6A teams gets us ready for the possibility of playing in a final game.”

The Falcons play host to another 6A contender in No. 7 West Linn at 7 p.m. Tuesday, while Bend (4-2-0) opens Mountain Valley play with a home match against McKay.