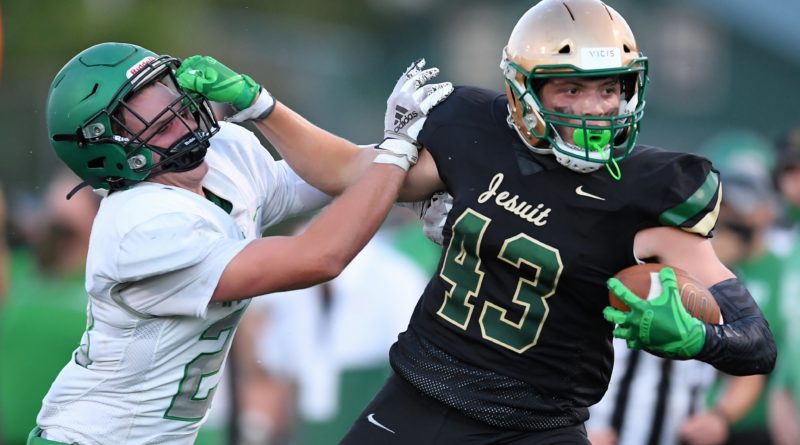 Over the next few weeks, we’ll be taking a position-by-position look at some of the top players in Oregon high school football. Our fourth list focuses on the tight ends. (Quarterbacks | Running backs | Wide receivers)

There are hundreds of standout football players in Oregon and these lists are not intended to be comprehensive! Use the comments section to discuss the other tight ends worthy of fans’ attention in 2021.

Find our team-by-team breakdowns for every 6A, 5A and 4A team in Oregon at this link

Pugliano, a 247Sports 4-star recruit ranked No. 2 in Oregon’s class of 2024 and No. 3 nationally among sophomore tight ends, shined as a freshman and recently picked up his first scholarship offer, from Oregon. Black Tornado coach Nathan Chin said the team will use Pugliano in a variety of ways. “He runs well, catches it well and is physical,” Chin said. “It will be fun to see him continue to develop.”

Waits is a big presence running down the seam, making 10 catches for 161 yards and a touchdown and making the all-Far West League team for the Class 3A Showcase champion Challengers in the spring. “Austin is a smart football player who you can give a lot of responsibility to,” Cascade Christian coach Jon Gettman said. “He’s a big-bodied receiver who has great hands, which allows him to make tough catches in traffic.”

The tight end position will be an integral part of the offense first-year Gophers coach James Allen is installing, and the 6-foot-4 Booze should help with his ability to run and catch the ball. Allen lauded Booze’s athleticism and toughness and said his work in the weight room has paid off.

Just how often is a tight end voted the offensive player of the year in a league? That’s the talent White possesses after leading Class 4A in receiving yards in the spring (32 catches for 604 yards and nine touchdowns). He had 11 catches for 185 yards and two touchdowns through two games this season. “He is our go-to guy, our workhorse,” Banks coach Cole Linehan said. “He catches everything. He does everything we ask him to do. He’ll catch a quick 10-yard slant and take it for 50 because he sheds off three tacklers. He’s so big and strong.”

McMaster can do a little of everything for the Fishermen, which allows coach Howard Rub to utilize him in multiple formations to create matchup nightmares for opponents. “Colton is, physically, a man amongst boys,” Rub said.

Lakers offensive coordinator Nick Halberg called Layne, who last season earned all-TRL recognition on offense (honorable mention at wide receiver), one of the team’s most versatile players. He has drawn interest from several schools, including offers from Eastern Washington and Valparaiso of the FCS. “He is a big, physical kid that really does a lot of things well,” Halberg said.

Jackman last season received all-TRL honorable mention on offense. A physical presence who can set the perimeter on either side of the ball, he has drawn interest from several Northwest Division II and III schools. “He just continues to develop and get stronger,” Tigers coach John Kemper said. “He needs to keep developing as a blocker, but he catches the ball well and runs routes well for a big guy.”

As a freshman, Ellison was first-team all-NWOC East at tight end and received honorable mention at linebacker. That’s part of what prompted first-year Falcons coach Dustin Janz to say Ellison has “crazy upward potential.” That Ellison has a projectable body doesn’t hurt, either. “He has just a tremendous mind, he’s a very hard worker, an amazing specimen of an athlete,” Janz said.

Biedritzky, an all-TRL honorable mention selection on offense as a junior, is a big target with soft hands who can run the seam.

Newell is one of the top players in Oregon and recently selected Nevada over offers from Arizona, Army, Colorado State and Fresno State, among others. He’s rated a 3-star recruit by 247Sports and ranked the No. 4 player in the state. He starred in the Les Schwab Bowl after catching 19 passes for 249 yards and six touchdowns as a junior, and he’s poised to do some serious damage to opposing defenses this season. “He’s obviously super high profile and plays at a really high level,” Colts coach Justin Starck said.

As a coach’s son, perhaps it should come as no surprise that Noah has developed into a student of the game and a very technical player, showing great improvement at both of his positions in the spring. “He has great hands and can run after the catch — we saw a lot of that last season,” Tigers coach Rich McIlmoil said.

Williams is perhaps the best-known player on the Rams among the college recruiting crowd — the top-ranked junior recruit in the state according to 247Sports and ESPN, with offers from Arizona State, Ohio State, Oregon and Georgia Tech among the dozen so far from FBS schools. He can line up at tight end or wide receiver on offense. “You might see him at quarterback in some packages,” Central Catholic coach Steve Pyne said, adding that Williams can run and pass. For all the attention Williams has gained already, Pyne said there’s room for growth: “I imagine he’ll be vastly improved from last spring.”

McKelligon started on both sides of the ball as a junior and was Jesuit’s second-leading receiver with eight catches (including both of the team’s passing touchdowns) for a team-high 147 yards. He had four catches for 52 yards through two games this season. “A very good athlete who will continue to play at the next level,” Crusaders coach Ken Potter said.

Wolfe is a critical two-way player for Lebanon. He was an honorable mention all-state tight end as a sophomore and caught seven passes for 90 yards and a touchdown as a junior. “We are not super big across the board, and Waylon brings us size and athleticism,” Lebanon coach Troy Walker said. “He’s got a defensive demeanor to him; he’s a guy who likes to hit people.”

Schlottmann is a triple threat in the Glencoe lineup, making the all-conference second team on the defensive line as a junior and receiving honorable mention at kicker and tight end. “He has grown so much this last season,” Crimson Tide coach Ian Reynoso said. “The spring season we got was huge for him, and he’s gotten a lot of exposure over the summer. I think he will be the top tight end in the state. He increased his physicality by moving to the defensive line, and he has great hands.”

Find our team-by-team breakdowns for every 6A, 5A and 4A team in Oregon at this link