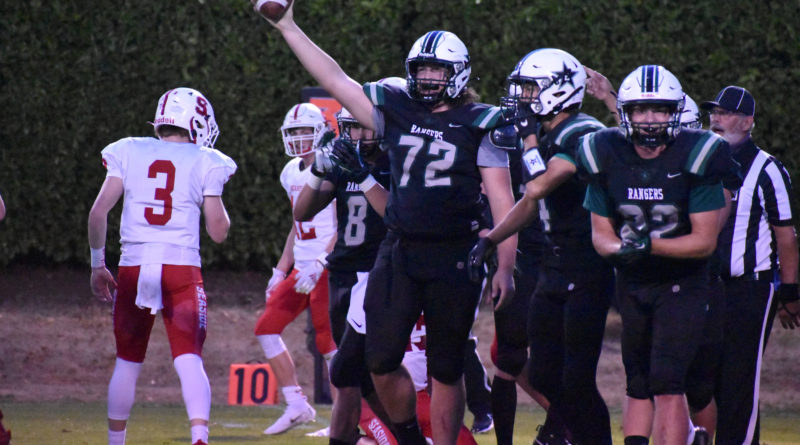 Estacada football fans are cheering on their goliaths this season with their giants pushing and shoving their way to the No. 2 spot in this week’s OSAA 4A rankings.

The Rangers have been unstoppable early this season with three wins — all against playoff qualifiers from 2019. The team’s impressive start has been powered by its offensive line, which averages 250 pounds per man across the front, dominating the point of attack against each of its top-tier opponents.

“The line is one of our strengths — we returned everyone from that short spring season and they are playing with a lot of confidence,” Estacada coach Andy Mott said. “They have put the work in, and they come out and execute every Friday.”

Guard Devin Gotchall is the only senior in the starting five that also includes a pack of juniors in center Mariano Martinez, guard Dominic Nacoste and tackles Cody White and Andrew Turner, who is playing with extra inspiration this year.

His older brother, Jackson Turner, went down with a hyperextended knee that caused ligament damage in the team’s preseason jamboree. That injury will keep him sidelined throughout his senior year. Andrew moved into his brother’s starting spot and has chosen to wear Jackson’s number (77) for the remainder of the season.

“He’s my brother, and I want to do well in his place and honor him. I wanted to wear his number as a show of respect,” Andrew said.

Junior Jacoby Fullerton is also a regular in the rotation, keeping players fresh for a unit that receives time on both sides of the ball.

“We want to get in there, punch them in the mouth and just keep going,” Gotchall said. “My teammates make everything great. We really push each other to get better.”

“Everyone hit the weight room hard over the summer, and we’re seeing it on the field on Friday nights,” Nacoste said. “We want to be physical. We are a four-quarter team. When we see the other team with their hands on their hips, we know they’ve stopped trying.”

In a 33-7 win over Banks in Week 2, that moment came early in the third quarter. The Rangers took over at their 5-yard line and put together a 10-play march — all runs — that ended in a 2-yard touchdown plunge by Waylon Riedel for a commanding 27-7 lead.

Estacada encountered only one third-down play while driving the length of the field. The offensive line paved paths like a bulldozer, setting up runs of 37, 16 and 12 yards along the way.

“They embrace our identity as an option team,” Mott said. “Being able to run the ball lets us control the clock and the pace of the game.”

The Rangers load up the backfield and line up mostly in tight formations, while using more shifts and fakes than a Three-Shell Monte street hustle.

In last Friday’s 30-14 home win over Seaside, the game-breaking moments came in the first half.

Three trips to the end zone, each followed by a two-point conversion. The Rangers have cashed in on more than half of their two-point tries with Mott at the helm, so he has made that the team’s default setting for point-after attempts.

On this night, Estacada’s line pushed the Seagulls defensive front into the end zone, setting up walk-across scores where the ball carrier went in untouched.

“If we can put 8s on the board, that’s a big hole to put a team into,” Mott said. “We get a good push up front from our big guys, and we feel like we should be able to pick up three yards on every play.”

While ground travel is the team’s preferred mode of transportation, the Rangers aren’t afraid of going to the air.

During Friday’s game with Seaside, the Rangers took possession in their end of the field with 1:38 left in the first half. A 30-yard air strike to Caleb McDonald quickly put the team in scoring position.

But McDonald wasn’t done yet.

With time for only another play or two, Estacada quarterback Cory James took the snap and rolled to his left. The defense gave chase, and McDonald found himself alone on the far side of the field. He gave a shout, and James stopped in his tracks, twisted his body and fired a spiral that found McDonald for an 18-yard touchdown with 0:09 on the clock.

The Rangers had the game in hand 24-0 heading to halftime and would extend that margin to 30-0 before Seaside scored two touchdowns late in the fourth quarter.

White is the biggest of the bunch up front, measuring in at 6-foot-7 and 270 pounds, leaving opposing rushers with a face full of jersey numbers all night long.

“I try to use my strength, and my size allows me to get more leverage, but you still have to get low and use good fundamentals,” White said. “I’ve learned so much from my coaches, and I put that into play.”

Nacoste, playing nose tackle on defense, is also a force at 6-foot-5, 265 pounds. He disrupts action in the middle of the field, coming up with two fumble recoveries in Friday’s win over Seaside.

“These guys are big and strong and smart, and they are out there getting double-teamed almost every play,” Rangers defensive line coach Jim Carey said. “That opens things up for our linebackers to come in and clean up the play. It can be frustrating, but I keep telling them that they pay guys a lot of money to draw double teams on Sundays.”

Said White: “On the defensive side, if we all do our job, teams can’t go anywhere.”