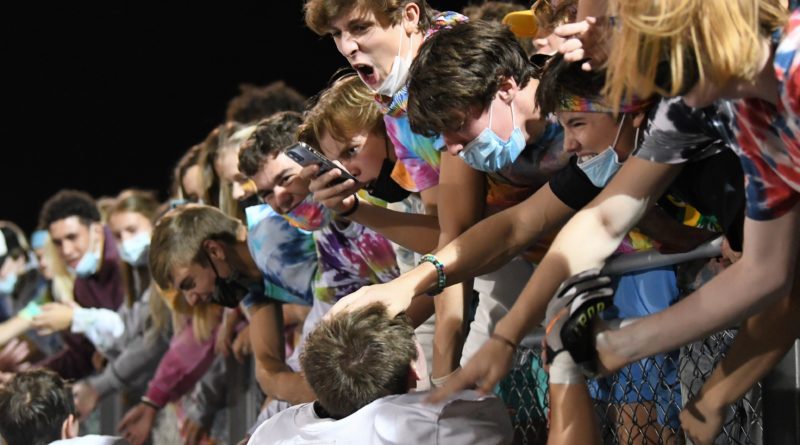 Here’s what stood out during the third weekend of action.

In the first three weeks of the season, I’ve had the opportunity to watch three of the top five teams in the SBLive Oregon Class 6A media poll:

All three of those teams showed they are capable of making deep postseason runs in November and December. They also showed such similarities that they are almost indistinguishable in terms of trying to separate which is the best of the three.

Each is breaking in a first-time starter at quarterback. While Rams sophomore Cru Newman received significant playing time during the spring season, questions remained as to whether he was ready to be a full-time starter at such a young age.

The Cavaliers and Lions turned to quarterbacks who hadn’t gotten much action under the Friday night lights before this season. Both junior Blake Baker of Clackamas and senior Chase Harmon of West Linn showed poise and stayed away from big mistakes, except for one play Harmon would love to have back from Friday’s win at Sunset — he tried to force the action on third down and watched Padraig Owens return his fumble for an Apollos touchdown.

All three teams also boast an overflowing abundance of skill-position talent that poses a pleasant problem for each of the coaches — how to get all those players touches.

Finally, each features an underrated defense that doesn’t get much attention because of how potent their offenses are.

“We’re young on offense, so our defense is going to have to make plays for our offense to make up for our mistakes,” Lions junior Mark Hamper said after West Linn held Sunset to 202 yards of total offense. “That’s exactly what we did tonight.”

What does all this mean going forward?

Clackamas and Central Catholic will have to fight complacency during their Mt. Hood Conference slates until they finally clash in Week 9. Sandy or Barlow will present some problems, but neither appears to have the offensive firepower or defensive personnel to match up with the Cavaliers or Rams for four quarters.

West Linn has one more nonleague game, against Camas this week, before it jumps into Three Rivers League play against No. 1 Tualatin on a Saturday afternoon. The Lions won’t have any breathers before the playoffs kick off in early November, but they’ll surely be battle-tested as they gun for their second official state title in the past five years.

Speaking of Sandy, the Pioneers took a big step toward securing one of the Mt. Hood Conference’s three automatic playoff berths with a 14-7 victory over Barlow for their first 3-0 start since 2013.

The Pioneers got an extra week to prepare for the season when their Week 1 matchup with Reynolds became a forfeit because of a COVID outbreak at the Troutdale school.

“Not being able to play the varsity game after all the work we put into the season was a hard pill to swallow for my kids,” said Sandy coach Josh Dill. “They had their last two games of the spring season canceled due to COVID as well, so it just felt like we were being dumped on.”

Instead of dwelling on their disappointment, the Pioneers rebounded with a 45-14 trouncing of Centennial in Week 2, with junior Payton Giusto stepping up in senior Ashton Turin’s absence and running for 162 yards and a touchdown.

On Friday, they ended an 11-game losing streak to the Bruins that dated to 2000 (Sandy was Class 5A for eight seasons, rejoining the MHC in 2018) as junior Leithan Thompson scored the go-ahead touchdown on an 83-yard pass from Teague Clemmer and intercepted a pass late to preserve the victory.

Besides his skill-position standouts, Dill also singled out senior lineman Robert Burns, who plays guard and defensive end, for “bringing his hard hat to practice every day and doing the grunt work. He’s everything you want as a pulling guard — athletic and physical.”

Senior Ethan Lucore, who plays tight end and middle linebacker, has set the tone with his physicality on both sides of the ball, and junior Garrett Willenberg leads the team in tackles.

“Garrett flies around on defense and has been lights out for us,” Dill said.

Next for the Pioneers is a matchup with Central Catholic, which has won 13 in a row against Sandy going back to the 1999 season. Dill recognizes the challenge that lies ahead for his team Friday night.

“The game against Central Catholic is a tremendous measuring stick for us,” he said. “There is good, and then there is Central Catholic good. A program with all those highly touted recruits and a history of winning the state championship is a daunting task. It’s one that we look forward to.

“I know a lot about my guys after this win over Barlow — who they are as young men, their toughness and how strong their bond is together. We want to be playing with the best teams in the state at the end of the season. Central Catholic is a team that will surely be there, so let’s see where we are now.”

McNary won back-to-back Mountain Valley Conference championships in 2018 and 2019, but the Celtics went winless in nonconference play each of those seasons, including a couple of first-round playoff losses.

This season, however, the Celtics have proved themselves in nonconference play, improving to 3-0 with a 41-0 victory over Grants Pass for their first shutout of a nonconference opponent in the past 13 years.

McNary coach Jeff Auvinen attributed his team’s fast start to “a better mentality by our players, especially our seniors. They just want to have fun and compete, so we have played with a great deal of confidence. We have great senior leadership, with some of them having played with us for three years now, so they have seen our struggles and learned from them.”

The defense has allowed just 27 points in three games and came up big in a 17-14 victory over Newberg in Week 2, shutting out the Tigers in the second half and overtime. Auvinen praised the play of his secondary, all of whom — corners Gunner Smedema and Sage Allen, and safeties Zane Aicher and Tyler Copeland — are returning starters.

“We have complete trust in them to keep us safe,” he said. “They allow us to do whatever we want in the box.”

Auvinen also has been pleasantly surprised with the physicality of his players against the run, which helped the Celtics hold Grants Pass to fewer than 100 yards of total offense. He singled out defensive linemen Jeremiah Ratliff and Isaac Scroggins and linebackers Braiden Copeland and Jake Paton for leading the charge.

The Celtics’ run defense will be put to the test again this week in their MVC opener against Bend and its run-heavy offense.

West Albany fended off one of the top challengers to its two-year grip on the Mid-Willamette Conference title when it knocked off Dallas 21-9 on Friday to improve to 3-0.

The Bulldogs, who moved back down to Class 5A in 2018 after a four-year run in 6A, have not had an easy road to their fourth 3-0 start in the past five seasons. They held off Beaverton of the 6A Metro League in Week 1, then escaped with a 17-14 victory at Canby in Week 2.

The Bulldogs entered the season with an experienced offensive and defensive line, led by four seniors in Carson Benedict, Dakota Monson, Chase Barnes and Spencer Hedding. The biggest question mark was who would be the playmakers around senior quarterback Michael Cale.

They thought they’d found one in junior running back Marcus Allen, who rushed for 110 yards against Beaverton, but he suffered a leg injury in the first quarter of the Canby game and sat out Friday’s win over Dallas.

That has forced the Bulldogs to rely upon a playmaker-by-committee approach. Against the Dragons, they got two big plays from Cale — a 45-yard touchdown pass to Riley Paxton and a 61-yarder to Tyler Hart-McNally — and rode a defense that held Dallas to 223 yards of total offense and intercepted two passes.

“Our group has done a great job overcoming obstacles and the challenges presented,” Mehl said. “We have continued to do it as a group and not leaning on any single player. When injuries have occurred, guys have been ready to step up and fill the void.”

The Bulldogs’ style hasn’t led to many breathers during the first three weeks, and although their next three opponents — Crescent Valley, Central and Lebanon — are all 1-2 through three weeks, Mehl knows his team can’t rest on its laurels.

“We have had moments where we are playing solid football in all three phases, and we look forward to being more consistent in our execution moving forward,” he said. “We know that our best football is ahead of us, and it is something we are excited about.”

Five years ago marked the low point in the history of a Philomath football program that kicked off in 1940.

In the aftermath of a hazing incident at a team training camp in July 2016, the school board canceled the season. It was eventually determined that hazing in the program dated back several years, leading to a complete overhaul of the program.

The Warriors returned to the field in 2017 and went a combined 5-19 over the next three years. They began to turn the corner during the COVID-delayed spring season, finishing 4-2, and they’re off to their first 3-0 start since 2013 after a 32-12 victory over Woodburn on Friday.

Coach Alex Firth, who took over this year from Tony Matta, declined comment about the program’s recovery from the hazing scandal at the request of school officials.

When it came to discussing who has keyed the team’s turnaround this season, he pointed to several players, starting with junior running back David Griffith, who has rushed for 417 yards and five touchdowns in three games.

Ty May is a 6-foot-6, 215-pound junior tight end who caught the go-ahead touchdown in a Week 2 victory over Blanchet Catholic and has become “a huge target in the passing game,” Firth said. Seniors Isaac Lattin and Jake Williams anchor the linebacking corps that Firth called the strength of the Warriors defense.

Philomath, No. 1 in the OSAA rankings, gets its biggest test to date this week when it travels to Myrtle Creek to face South Umpqua in a matchup of 3-0 teams. The Warriors also have back-to-back games in Weeks 7 and 8 with traditional PacWest Conference powers Amity and Dayton.

Only two teams have scored 153 points through three games this season — North Douglas, playing 1A six-man football, and Westview, which blitzkrieged its third opponent in a 55-7 victory over Century. The Wildcats look to snap a 26-game losing streak to Jesuit on Friday night. The Crusaders have bounced back from a Week 1 loss to West Linn with back-to-back wins over Tigard and Camas. … Central Catholic made the 150-mile trip up I-5 on short notice Friday and took down a second Washington state champion, defeating 2019 Class 2A champion Tumwater 42-35 in overtime. No word yet on whether the Rams can try for a clean sweep of Washington’s big-school champions by scheduling a last-minute game with Eastside Catholic, which beat the Rams 44-21 en route to winning the 3A title in 2019. … Through three weeks, there remain 12 unbeaten teams in 6A, four in 5A (including No. 1 Thurston, which didn’t play the first two weeks while in COVID quarantine) and six in 4A. On the flip side, 13 teams in 6A are winless, along with four 5A teams and 10 in 4A. Of the 27 winless teams in the top three classifications, North Marion (0-2) is the only team yet to score.