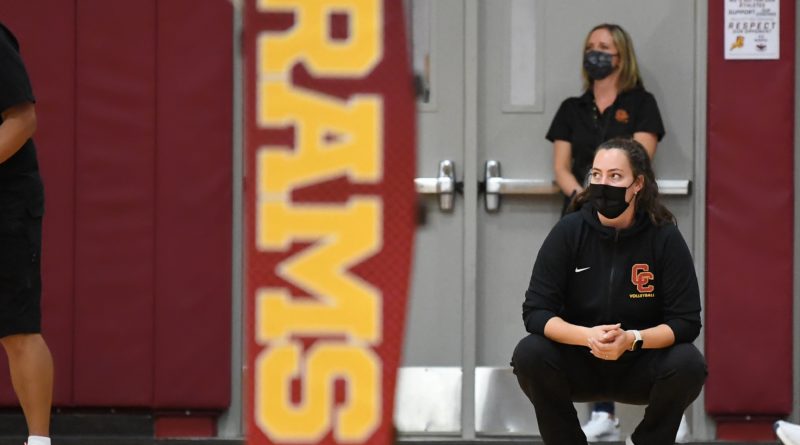 Lorenz coached the team for 32 seasons and won 11 state championships. The 32-year-old Hambley has a different style but is enjoying similar results as the Rams appear poised to win their 17th consecutive conference title.

Kayla Hambley had but one request after a long day teaching and coaching.

She’d just spent the past couple of hours standing and directing the Central Catholic volleyball team to yet another Mt. Hood Conference victory — this time a three-set sweep of Gresham on Wednesday night.

That came after caring for her 3-year-old daughter and 1-year-old son in the morning before heading to her job teaching psychology at the Southeast Portland school.

Now, she had a few moments to relax and reflect upon how she’d gone from begging to become a volunteer assistant under Hall of Fame coach Rick Lorenz as a student-teacher in 2011, to Lorenz tapping her as his heir apparent in 2017, to taking over the storied program during a pandemic, and finally to this average, hectic Wednesday night.

“It’s been a process of just kind of adjusting and tweaking and coming into my own as a head coach,” the 32-year-old Hambley said. “But at the same time, also wanting to carry on many of the amazing traditions and things that our entire coaching staff and Rick did for decades. Of course, I want to put my little tweaks on it, but there’s so much tradition to be built upon.”

The architect of that tradition spent a quiet Wednesday evening at home.

Lorenz doesn’t mind not having to set up a gym and sit through the drudgery of a conference volleyball match. The 72-year-old is quite happy enjoying his retirement from coaching and teaching, creating his stained-glass art and honing his golf game with his regular group of 8-10 former coaches, ex-players and dads he’s gotten to know over 44 years coaching at St. Mary’s Academy, Lake Oswego and the final 32 years at Central Catholic.

They get together two or three times per week for friendly skins matches at Heron Lakes or Eastmoreland, played for low stakes (usually a quarter a hole) but enough to whet his considerable competitive juices.

“I got out at the right time,” Lorenz said. “It’s a whole different era now, and then with COVID, that would have been tough to deal with.”

Lorenz retired after the 2019 Class 6A state championship match, when the Rams came two points from sending him out with a 12th title. Instead, he finished with a 13th runner-up trophy to go with a record of 1,342-205 and enshrinement in the NFHS and National High School Volleyball Coaches halls of fame.

“I miss coaching a competitive match,” he said. “I miss the state tournament. What I’m doing now doesn’t take the place of competing in a tight match with a Jesuit or a West Linn. And I miss the kids, the camaraderie with the coaching staff, officials, other coaches.”

Since his retirement, Lorenz has taken a decidedly hands-off approach to the program he spent more than three decades directing. He has yet to attend a match, although he does follow the matches via Ram TV whenever they’re on the air.

He also doesn’t maintain constant contact with Hambley, keeping tabs instead through longtime assistants Malcolm Doi and Joe Rivelli, both of whom remained on Hambley’s staff.

Part of his detachment results from Hambley leading a busy life with her family, coaching, teaching and working with the Campus Ministry program that organizes the retreats for Central Catholic students. Part of it, though, is by design.

“It’s best for me to stay out of the way,” Lorenz said. “She can call me whenever she wants to ask me any questions. But I don’t want to bother her too much. She has her hands full.”

He wanted to come to the Central Catholic tournament over the weekend to finally check out the Rams in person before finding out spectators were not allowed, so he’s now planning to go to the West Linn tournament in a few weeks.

When Hambley heard that, she smiled.

“I’m so excited,” she said. “Rick is more than just somebody who used to run this program. He’s a mentor. He’s a great friend and somebody I really cherish. Even though Rick is gone, we miss him.”

Lorenz’s former players still in the program (four in all) also miss having him around, though there is certainly a different vibe with Hambley in charge.

Lorenz was much more of an “old-school” coach who wasn’t shy about getting in a player’s face to make a point.

“When I was new and came in my freshman year, I was nervous about getting screamed at,” said senior hitter Elliott Bush, who had a match-high 16 kills Wednesday. “I would say that element of fear is gone. Everyone is a lot more relaxed, and it’s funny because I see our underclassmen running around, and I think back like, ‘Oh, when that was me, I was so scared,’ but now they don’t have someone screaming at them.”

Yet, when Bush ran into Lorenz at Central Catholic’s recent football game against David Douglas — Lorenz usually had his own box at Hillsboro Stadium where he would watch the Rams with selected friends and family — “we were just catching up like friends.”

“I liked that style of coaching,” Bush said. “I completely appreciated Rick for it. But with some people, it was more hit and miss.”

Senior captain Lauren Stemple, a setter on the 2019 runner-up team, said that while the feedback she got from Lorenz is similar to what she hears from Hambley, “Rick was definitely a little louder. Kayla’s more laid back, and she brings the female perspective. She likes to check in with us, how we’re doing mentally, and I think since she’s a psychology teacher, she really cares about what’s going on up here (pointing to her temple).”

Hambley said her coaching style stems from an experience she had as a youth soccer player.

“I was probably in the fifth grade, and I had a coach who always talked about why he coached the way he did,” she recalled. “He said, ‘I always want to tell players what they need to do instead of telling them what they did wrong.’ And while I did not like soccer, I liked that coach, and it has stuck with me.”

So, Hambley will break out pen and paper and have the kids draw the proper position for the body when hitting or blocking. She’ll talk with them about how their day is going and how it might have affected their play.

“You know, I still yell sometimes,” she said. “I don’t think one style is better than the other. It’s just what works, what’s most comfortable for me, and hopefully, it’s what works best for the team.”

When it comes to what works for the team regarding X’s and O’s, not much has changed.

For one thing, there’s the connection between the two regimes that comes from having Rivelli and Doi still around. Rivelli, who joined the staff in 1990, helps run the same drills he and Lorenz ran for years, while Doi is a constant figure — even when he was in Hawaii during the spring COVID season, tracking stats from live video feeds and chatting with players and coaches via Zoom.

“Malcolm’s like the bridge between the two programs,” Stemple said. “The way we play our defense in our home positions, the way we call our sets and plays, have all stayed the same.”

Hambley loves spitballing lineups with Doi, joking that they’re probably on their 15th lineup in just their fifth match.

“Malcolm loves coming up with lineups,” she said. “And I love looking at his lineups.”

They’ve settled on one that dominated the Gophers on Wednesday night, lifting the Rams to their 67th consecutive Mt. Hood victory dating to a five-set loss to Barlow on Sept. 20, 2016. They’re well on their way to winning a 17th straight conference title, having won their first five matches without dropping a set.

Hambley and Doi have enjoyed crafting lineups because of the players’ versatility. Junior Mia Starr splits time with Stemple at setter but is also one of the Rams’ top hitters, while two other setters — sophomore Delainy Williams and freshman Mia Hunt — wait in the wings.

Hambley also had to make room for another freshman, Malia Parker, in a crowded front line that features Starr, Bush and juniors Sofia Cooper and Alycia Wilson.

“They’re just all so dynamic, multifaceted players,” Hambley said. “We have so many players that can do so many things that we can plug people in and pull people off the bench, and a lot of it is just what works. So, I wouldn’t say the lineup we used tonight is the lineup that we’ll use in two weeks.”

Bush, for one, can’t wait to see what the team looks like once the mixing and matching creates a finished product.

“We have the talent, but being a team of 15 players, there’s a lot more of us, which means it can be a little harder to become so tight-knit,” Bush said. “Once we get our chemistry down and can run things a little bit faster, we can be unstoppable. That’s why I say we have no ceiling.”