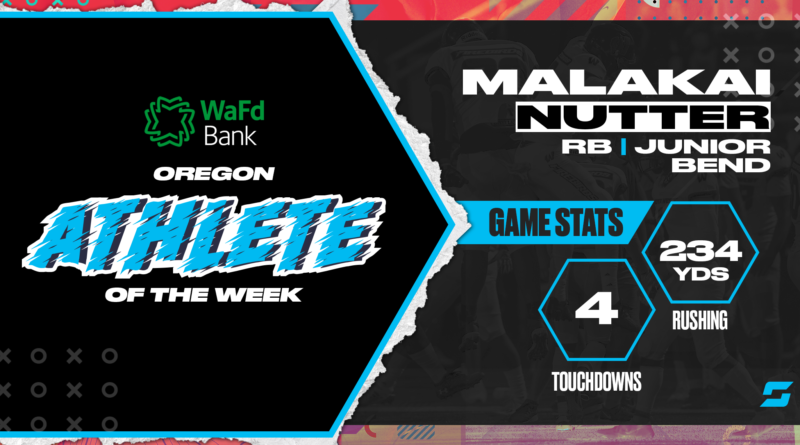 Congratulations to Bend running back Malakai Nutter for being voted SBLive’s WaFd Bank Oregon High School Athlete of the Week for Sep. 6-12!

The junior rushed for 231 yards and four touchdowns to power the Lava Bears to a 41-27 victory against South Medford.

Nutter received 35.12% of the vote, beating out Sprague’s Drew Rodriguez who finished second with 29.91%. Gladstone’s Tate Brechbiel finished third with 17.37% and Gresham’s Jaden Mitchell finished fourth with 3.93%. There were over 39,000 votes tallied this week!

Kyron Albright, Beaverton football: Albright returned a kickoff 88 yards for a score and caught a 38-yard pass from Hunter Borter for another touchdown, helping the Beavers pull away from Aloha for a 41-18 win.

Tate Brechbiel, Gladstone football: Brechbiel rushed for more than 200 yards, including a 50-yarder that allowed the Gladiators to seal a 21-20 win over Astoria.

Jimmie Copeland, Eagle Point football: Copeland finished with 132 yards on six receptions, including a touchdown catch in the first quarter of the Eagles’ 24-7 victory against Springfield.

Hiro Diamond, Liberty football: Diamond accounted for seven touchdowns (four passing, three rushing) — including an 80-yard run on the Falcons’ first snap — in a 52-0 rout of Lincoln. Through two games this season, he has been responsible for 13 touchdowns.

Mason Ebenal, Sunset football: Ebenal had three touchdowns — two receiving, one rushing — to help the Apollos roll past Southridge for a 45-7 win.

Cayden Eckel, Roseburg football: Eckel, a sophomore, ran for four touchdowns, all in the first half, to lead Roseburg on its way to a 37-7 rout of Mountain View.

Ashton Foster, Dallas football: Foster was an efficient 13 of 16 for 171 yards and two touchdowns in the Dragons’ 34-6 victory at Wells.

Hudson Giertych, West Salem football: Giertych rushed for 157 yards and a touchdown in the Titans’ 42-20 win over Grants Pass. He had a blocked extra point in the first half.

Mark Hamper, West Linn football: Hamper had more than 150 yards receiving and three touchdown catches and intercepted an opponent’s pass for the second game in a row, helping the Lions cruise past North Medford for a 49-7 win. (Photos)

Mizael Harris, La Salle Prep boys soccer: Harris had two goals in the Falcons’ season-opening 4-1 win over Corvallis in a showdown between two of the likely Class 5A title contenders.

Zeke Heaton, Mazama football: Heaton rushed for 247 yards and four touchdowns for the Vikings in their 42-14 win over Crater.

Kolby Johnson-Sallee, Dallas football: On offense, Johnson-Sallee had three catches for 46 yards and two touchdowns. On defense, he had six tackles, two tackles for loss and a sack. The Dragons defeated Wells, 34-6.

Caleb Lakeman, Tualatin boys cross country:Lakeman, a senior, turned in a 15:43.50 to finish in first place at the TRL preview. His brother, junior Aaron Lakeman, was second.

Jack Layne, Lake Oswego football: Layne passed for four touchdowns and ran for a fifth to drive the Lakers to a 48-20 win over Sherwood. (Video)

Jaden Mitchell, Gresham football: Mitchell scored three touchdowns, including an 86-yard kickoff return, to carry the Gophers to a season-opening 26-6 win over Nelson.

Heath Nichol, Sweet Home football: Nichol passed for 245 yards and four touchdowns to lead his team to a 35-0 win over North Marion. He added 28 yards on five rushes.

Logan Person, Dallas football: Person had 173 yards from scrimmage on offense — 137 rushing, 36 receiving for two touchdowns — in the Dragons’ 34-6 rout of Wells. He recorded six tackles on defense.

Jae’Sean Pete, Grant football: The Generals lost 44-27 to Sheldon, but Pete did his part, piling up 273 yards and three touchdowns on 24 carries.

Ana Peters, Lake Oswego girls cross country: Peters, a freshman, ran to victory at the TRL Preview in a time of 18:32.77.

Logan Ready, McNary football: Ready booted a 43-yard field goal to give the Celtics an overtime win, 17-14, at Newberg.

Drew Rodriguez, Sprague football: Rodriguez had an interception return for a touchdown for the second game in a row on top of two touchdown catches, spearheading the Olympians’ 40-14 victory over Century.

Malik Ross, Tualatin football: Ross started the game with an 86-yard kickoff-return touchdown and sealed the 35-28 win over Silverton with a diving interception on the 1-yard line with 30 seconds left. He also had a 63-yard touchdown run. He finished with 131 yards on 14 carries and had two catches for 49 yards. (Story, photos)

Daschel Smith, South Salem football: Smith passed for 287 yards and two fourth-quarter touchdowns as the Saxons came from behind to beat Lebanon, 29-20.

Brock Thomas, Sheldon football: Thomas passed for 275 yards, rushed for 120 and totaled five touchdowns for the second game in a row in the Irish’s 44-27 win over Grant.

Miles Williams, Clackamas football: Williams had a scoring catch and exceeded 100 yards through the air, returned a punt for a touchdown and made an interception at the end to seal a 38-30 victory for the Cavaliers against Washington power Camas.