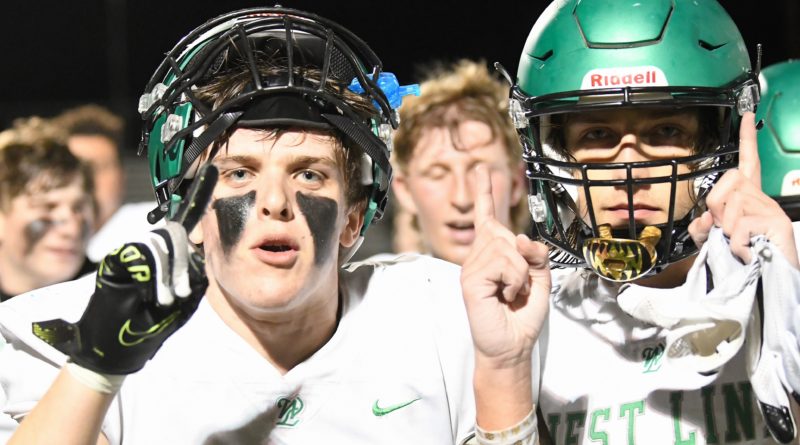 The West Linn football team’s mantra throughout the spring season was, “Leave No Doubt.”

When the spring season ended, though, as dominant as the Lions had been, on the other side of the metro area, there was Sunset also rolling to a 6-0 record, including an overtime victory over defending Class 6A champion Central Catholic.

With no playoffs, there was no way to settle the debate as to which team was best, but the next-best thing happened Friday night in Beaverton when the Lions and Apollos met at Sunset High School.

All week, the seniors who had graduated with rings emblazoned with “No. 1” provided by coach Chris Miller texted and IM’d their former teammates with one message:

Go get it done!

Mission accomplished. Chase Harmon threw for three touchdowns, Jaxon Steinhauer ran for a career-high 105 yards and a score, and the Lions handed Sunset its first defeat of the calendar year with a 28-14 victory.

“We wanted to do this not only for us, but for the seniors that left,” Steinhauer said. “They believed that they were the best team last year, and I knew for a fact that we were. So, it was just good to come out and get this win.”

Junior Mark Hamper also had a big night for the Lions, catching eight passes for 91 yards and a touchdown and making a highlight-reel play on defense, ripping the ball out of Sunset tight end Michael Ostby’s hands after Ostby made a catch and racing the other way as everyone wondered just what had happened.

“You know, it felt good. It kind of hushed the debate of who the real champions were last year,” Hamper said. “We didn’t get to play them last year. It would have been a great game, but we can’t control what we can’t control. We came out here tonight, got the win and left no doubt.”

The Apollos couldn’t recover from falling behind 21-0 as West Linn scored on its first three possessions, but they took comfort in their play in the second half, when they forced two turnovers and played the Lions even.

“In the first half, we were playing a little bit timid, knowing how big an organization they are,” said Sunset senior Hayden Hurley. “The second half, we showed who we actually are, who we know we are. The next time we see them in November or December, it’s going to be a different outcome.”

Senior Padraig Owens, whose 45-yard fumble return for a touchdown after Mason Ebenal jarred the ball loose from Harmon provided a jolt to the Apollos sideline, said the team’s second-half performance “showed that we can stand our ground and compete with them.”

The Lions appeared to have answered Owens’ big play with one of their own, but Koffi Kouame’s 97-yard kickoff return was wiped off the scoreboard by a holding penalty.

Instead, they snuffed out the Apollos’ momentum by grinding out a 14-play, 84-yard drive, chewing more than 8½ minutes off the clock before Harmon tossed his third touchdown, hitting Gus Donnerberg over the middle for a 23-yard score with 6:38 to play.

“We definitely had the advantage up front,” Steinhauer said. “I believe our O-line is the best in the state, so we knew we were going to come out running and just got the job done.”

Harmon had another efficient game running the offense, going 21 of 25 for 269 yards in his third career start.

“I’ve always believed in Chase,” Hamper said. “He’s just consistent. That’s what we need in a quarterback, and that’s what he does.”

West Linn looked poised to put the game away before halftime until an illegal shift penalty took away a first-and-goal inside the Sunset 5. The Apollos eventually held on that drive, with Ebenal’s fourth-down sack helping give them life going to halftime.

The Apollos held again on West Linn’s opening drive of the second half when Hurley stripped the ball from Steinhauer’s grasp and recovered the fumble at the Sunset 7.

“We’ve got to take advantage there,” Miller said. “We could have been up 28-0 easily at halftime, and it’s a wrap. Now, we can come out, get rolling in the second half, and then we’re where we want to get. So, it’s super disappointing when it’s just simply a kid not getting their feet set, so those are some things we need to clean up.

“But it’s nice to fix things on a big road win. Sunset’s a good football team. Their coaching staff does a really nice job, and they’ve got some talented athletes over there. But I’m not satisfied. It’s a good win. It’s nice to win, but I have higher expectations of our guys.”